Ten Thoughts on the Steam Controller 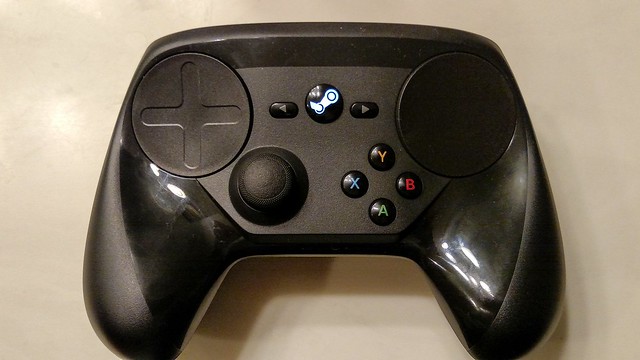 I bought a Steam controller last week, mostly because I was curious about what it would be like. Scattered impressions follow.

1. I actually like it as a controller, and found it pretty intuitive, but there is a very large caveat here in that I’ve primarily been a PC video game player for the last 20 years or so, so I don’t have any real ingrained habits regarding console controls, particularly XBox or Playstation controllers, which the Steam controller most resembles physically. I don’t have to unlearn any standard controller schemes, basically, in order to learn how to use this one. I suspect this makes me like this controller more than committed console players might.

2. I also like that this is immensely mappable to keyboard/mouse controls, which is indeed the thing that attracted me to it. You can go into the Steam app and just fiddle until you turn blue, if such is your joy (or even better, wait until some 14-year-old nerd does it for your favorite particular game and uploads the controller scheme for you to use).

3. That said, I immediately ran into a situation where the mapping failed: I tried to map keyboard controls for Descent and Descent II onto the controller and the game simply wouldn’t respond to the controller mapping at all. Now, I was trying this on games that are a couple of decades old, that also have to be opened in emulation, so I’m not sure this is a fair test of the controller. On the other hand, waaaaah, I wanted to play Descent. I’ll fiddle some more with it.

4. The haptic response on the right pad? Really does feel like you’re running your fingers along a trackball. It’s pretty wild.

5. I also mapped the controller to keyboard/mouse controls for Unreal Tournament 2004, and that worked pretty well actually. The right-pad-as-mouse was immediately intuitive, and the rest of it was easy to use. I did terribly, on account that I’m not used to using a handheld controller, but after a few minutes I was picking off bots, and I suspect if I devoted a little time to using the controller, I’d strafing and murdering like I usually do in relatively rapid order.

6. Which is to say that unlike Xbox/PS controllers, I don’t feel like I’m being unduly penalized on precision with the Steam Controller, which, as I mostly like playing FPS and similar games, is kind of a huge thing (and why I’ve generally stuck with PC gaming to begin with). The Steam controller is the first controller I could actually see using on a regular basis…

7. … if I wasn’t already playing games on my computer, in front of a keyboard and a mouse, which is what I do. Which is my problem: the Steam controller is meant for the people who want to play PC games on their TV in their living room — preferably, Valve hopes, on a Steam game machine — and that’s something I don’t really have any interest in doing. One, my game computer is my work computer, in my office, and I’m not going to drag it downstairs. Two, the keyboard/mouse scheme is already something that works for me, so I’m not going to replace it with something else.

8. All of which is to say that the Steam controller is a controller that actually works pretty well for me, and I like it, and there’s little chance I’m going to use it on a regular basis. Because it’s not designed for me, in terms of the games I play and how I play them, and where. Which I suspect is the controller’s real issue: It’s a solution in search of a problem. I mean, I kind of feel the people who play PC games get they’re playing them in front of a PC, with a keyboard/mouse set-up, and I also think the sort of nerd who wants to play PC games on their TV isn’t going to be fussy about using a keyboard and mouse in the living room. I’m also not entirely convinced people generally are going to migrate PCs into their living rooms when consoles offer a very good gaming solution for, uh, generally less money (plus locking down the hardware so game compatibility is not a moving target).

10. So am I happy with my purchase? I am, even as I wonder whether the controller actually is for me. I think the Steam controller does what it sets out to do, but I don’t know whether I am the person for what it is doing. I’m not inclined to ding it for that. Again: I like it. Now I just have to figure out if I’m ever going to use it.

← Announcement: The Kittens Have Official Names
Not Sure This Counts as the Actual First Snowfall of the Season →

31 Comments on “Ten Thoughts on the Steam Controller”