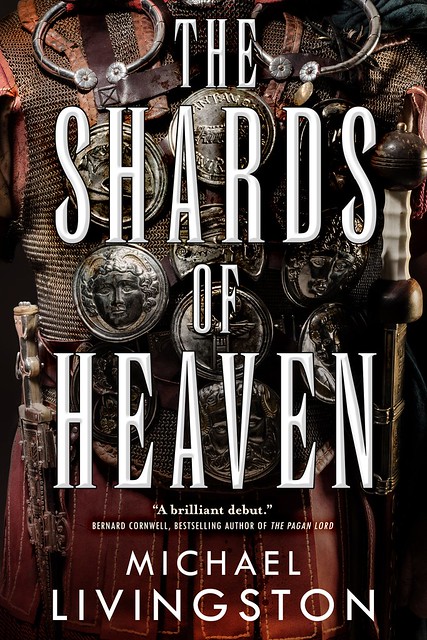 In his debut novel The Shards of Heaven, author Michael Livingston is hunting some big game indeed. And possibly changing the course of history — and myth — in the bargain.

My Big Idea in The Shards of Heaven was to make mythic artifacts real — and that meant killing God.

Hold up! Put the pitchforks and torches down, folks. Let me explain.

No. As Inigo Montoya said, there is too much. Let me sum up.

I was one of the many millions who were enthralled by the call of Middle-earth as children, and as an adult I’ve followed Tolkien’s footsteps in becoming a professor of medieval studies. As such, I’ve spent a lot of time thinking about how Tolkien designed his Middle-earth legendarium to function as a kind of mythic past to our myths — how The Hobbit, for instance, exists “behind” Beowulf.

It’s fascinating stuff. At the same time, it always bothered me how loosely Tolkien’s “mythology behind mythologies” fit into the real world. I can’t actually go to Minas Tirith, and that’s profoundly not cool.

So I set out, in the series that begins with The Shards of Heaven, to create a myth behind myths that would more closely tie to history. In so doing, I hoped I could also collapse the distinction between fantasy and history, which has always been too sharply drawn for my tastes anyway.

There are many twists and turns in the story that I put together for Shards — from the death of Caesar to the rise of his heirs, from the love of Antony and Cleopatra to the horrors of the battle of Actium — but that’s all plot and characters at the surface of the tale. The big stuff, what I like to think is the really juicy stuff, exists underneath all that. The big stuff is that mythology I built out of mythologies in order to explain those very mythologies, and the fantasy I wove into history to explain it all.

And the key to all that, it turned out, was killing God.

I mean, not that I really killed God. Not personally, anyway. That would be inconceivable. Deicide is decidedly above my pay grade. But it’s nevertheless true that within the mythology of the Shards my characters have declared Him, Her, or It to be dead, and that’s probably close enough to pulling the trigger in this case. (Whether or not my characters are actually correct in that declaration, of course, is something that awaits more books!)

Anyway, the plot premise of the series is this: everything history says about the rise of the Roman Empire is true … except it doesn’t tell us everything there is to say. Legendary artifacts of the ancient world — like the Trident of Poseidon and the Ark of the Covenant — are real, and they played a secret role in the shaping of the history we know. Fantasy is thus subsumed into “real” history (or vice versa, I suppose). And along the way, to make it all work — historically, philosophically, even existentially — God had to be real, and God had to die.

Why this is, how this is, and what this means … well, that’s a matter for some serious spoilers in The Shards of Heaven and in its sequels (book two comes out next year).

What I can say for certain is this: I really don’t think there’s any need for you to be gathering all that wood along with your torches. And all that gasoline … nope, I don’t think that’s necessary at all. Unless, well, if you’re going to burn books, please do start rolling the cameras. And call in the media, because that could be positively marvelous for sales.

Now that is a Big Idea.

The Shards of Heaven: Amazon | Barnes and Noble | IndieBound | Powell’s