The Deal Is Done 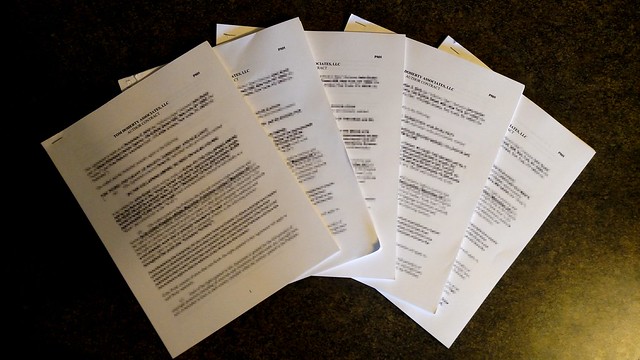 So, here they are. These five contracts you see above encompass thirteen books and ten years. The general details of these contracts were agreed to six months ago, but the fiddly bits took time to sort. I got the final versions of the contracts, signed by me and the folks at Tor, just this morning. This means that, finally and officially, I’m on the hook for writing all these books in the next decade, and Tor is on the hook for, well, everything else. We’re both all in.

My understanding is that there are still some people who are flummoxed as to why either I or Tor would enter into a deal of this size and length. From the point of view of strictly business,  I explain Tor’s rationale using financial terms: Essentially, Tor is buying Scalzi futures — paying a set price now as a hedge against potentially having to pay more upfront later. Tor absolutely believes they can make back what they’re paying me upfront over the length of the contract based on my sales today, but if my sales increase over the decade, then they get the future books at a discount (they still have to pay me royalties, of course, but that’s out of money that’s already come in, not money that’s fronted out). It’s an entirely rational move, economically speaking, on Tor’s part.

As for me on the strictly business end of things, well. I’ve noted before that the sums involved in the Tor contract represent the floor of my earnings for the next ten years, not the ceiling, and subsequent contracts and agreements that I and my team have made (Yes! I have a team! I know, it’s weird for me too) have already boosted what I have coming in by a significant margin — contracts and agreements facilitated by the fact the Tor deal was the foundation. Nothing is as assuring to potential partners as the idea that other people are already invested in you. Tor’s deal with me was smart for it; it was also smart for me, and not just in relation to Tor. There are other advantages as well, not directly related to money, chief among them being how I get to structure my time, and my ability to intelligently explore other opportunities that these contracts will allow.

This is why, as an aside, the Monday morning quarterbacking of the business aspects of my Tor deal was and continues to be interesting for me to watch — not only because people were opining based on incomplete information about the deal itself, but also an incomplete understanding of what it was that I and my folks are trying to do. This makes it sound like I’m sitting here, fingers steepled, Monty Burns-style, bellowing You foolish mortals! You know nothing of my master plan! and cackling while a camera captures my visage from a low angle. It’s nothing that sinister or complicated. But in fact, people don’t know what I want, business-wise, or how I’ve structured things to get as close to what I want as possible. It’s fine to speculate, of course. Go right ahead. But unless you hear it from me, it’s only speculation.

Away from the strictly business aspects of things, there are other reasons that I like this deal. I like the people I work with at Tor. They generally like me (I hope!). I like the fact they’re competent at things I’m not, or have no interest in being, so I can focus on the things I am competent at. I like the idea that some of the money I make goes back in to pay other writers Tor publishes. I like being a part of a house that has published some of my favorite genre writers. We have a similar philosophy about where my career could go and how to get there. We’re both happy to be able to plan long-term instead of just book-to-book. It’s a good match.

I also have personal reasons to like this deal, some of which are obvious (money!) and some of which are not. The short version of the latter is that there are now a lot of things I had to worry about before which I no longer have to, and I am more free, rather than less so, to do a number of things I would like to do. Additionally, and bluntly, the jar containing all the fucks I have to give about a whole range of things is just about empty now, and is likely to stay that way from here on out. This is a rare gift, made possible by these contracts. I intend to take advantage of it.

Ultimately, though, these contracts mean this: I get to do what I love to do for at least another decade, and I don’t have to do anything else but the thing I love to do. This is freedom, simply put. I am looking forward to it. I hope you’ll enjoy what comes from it, over the next decade and beyond.