One Month of the Scamperbeasts 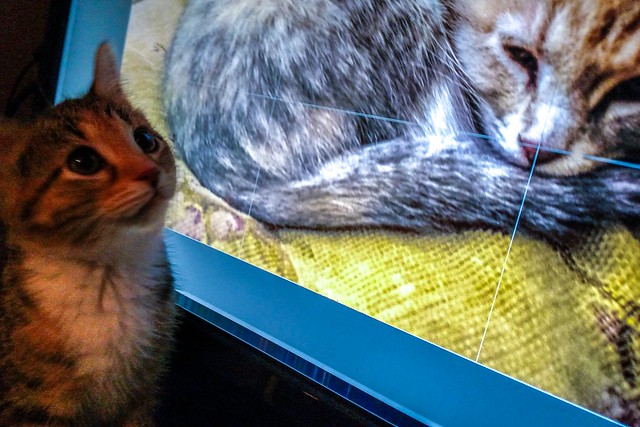 Yesterday marked one month since we adopted Sugar and Spice (previously designated Thing One and Thing Two), and I’m happy to say that the month has been mostly pretty lovely. Sugar is generally the adventurous and fearless one, always looking into cracks and crevasses, and trying to escape into the outside world (which we will not allow until they are large enough not to be easily carried off by birds of prey). Spice is generally the cuddly and affectionate one, although the two of them switch these roles from time to time on a schedule only they know about.

Daisy loves them both and wants to be their mommy — she frequently inserts herself between the kittens and Zeus, particularly early on, when Zeus expressed his displeasure at these new creatures in the house. The good news is that this Zeus does seem to be mostly over this; Sugar and Zeus have been seen touching noses without any hisses or aggressive acts. Spice mostly wants to play with Zeus’ tail.

With the passing of Lopsided Cat, among other things, it was a good time to have kittens in the house, and their general kitten rambunctiousness has been appreciated most of the time — it’s hard to be in a bad mood for long with two kittens scampering around like possessed stuffed animals. It’s not all adorableness, since both of them are reasonable stinky with their poos, and Sugar in particular is occasionally experimental in where she chooses to relieve herself. But that’s mostly been ironed out (thankfully). Overall, it’s been delightful. Kittens are fun.

So, one month down. Hopefully rather more than a decade to go.

37 Comments on “One Month of the Scamperbeasts”