Earlier this month, my daughter and I had the following exchange on Twitter:

Note the last comment from me, it’ll be relevant in a bit.

I was deeply amused by the exchange, and posted it to my private Facebook wall, which precipitated this comment, and my response: 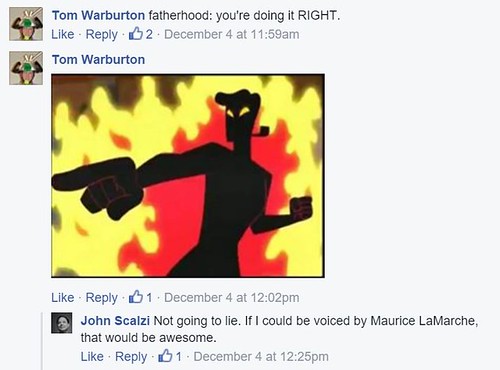 For those of you who don’t know, Tom Warburton is the creator of the animated television series Codename: Kids Next Door, which, among other things, was one of Athena’s favorite TV shows growing up. The shadowy figure with the pipe and the fire exploding behind him is Father, the adult nemesis of the Kids Next Door. Father is voiced by Maurice LaMarche, and he sounds like this (you’ll want to play the 30 seconds after it starts running, not, uh, the whole video. Also, if for some reason it starts at the very beginning, scroll to 9:56):

(You may also know LaMarche as the voice of this big headed, mousy fellow.)

LaMarche is one of my favorite voice actors, thus my remark to Tom above that if I could be voiced by Maurice LaMarche, that would be awesome. Because, let’s face it, all my proclamations, tweeted or otherwise, would sound 1000% better in LaMarche’s voice than my own.

Mind you, on my part, it was merely an observation. Tom, on the other hand, took it as a challenge.

I’m not gonna lie. I squeed. And then I ran downstairs to play it for Athena, who also agreed that it was officially the best thing ever.

Dear Mr. LaMarche: Thank you. You can speak my words anytime. And, Tom Warburton? You totally rock. Athena and I may get other gifts this December, but I suspect this one will be one that made us smile the widest.

(For those readers with sight/vision problems, a quick recap: I made a smart-ass comment to my daughter, and my friend Tom Warburton had that smart-ass comment read aloud by one of my favorite voice actors. It was awesome.)