From dream to reality in no time flat!

Got my most appropriate hand of #Superfight last night. John Scalzi, in a flaming tutu, with a kitten cannon.

I NEED FAN ART OF THIS, STAT https://t.co/vaGtn8VLla

Perfect. Just, absolutely perfect. I could not be more pleased.

Ironically, as this was going down on Twitter, a bunch of MRAs/bigots/pathetic reactionaries were trying to impugn my manhood over there in various unimpressive ways. I trust my absolute delight at this picture communicates my concern about measuring up to their silly definitions of masculinity.

@scalzi This is the best I could do on short notice. Next time give me a heads up when you need a new author photo. pic.twitter.com/qNWeSPFalo

@scalzi BY YOUR COMMAND (this is getting weird). Oh, and we need a new hashtag #ScalziFanArt pic.twitter.com/ZdYYi2cZIF

Serious, my life is cool. 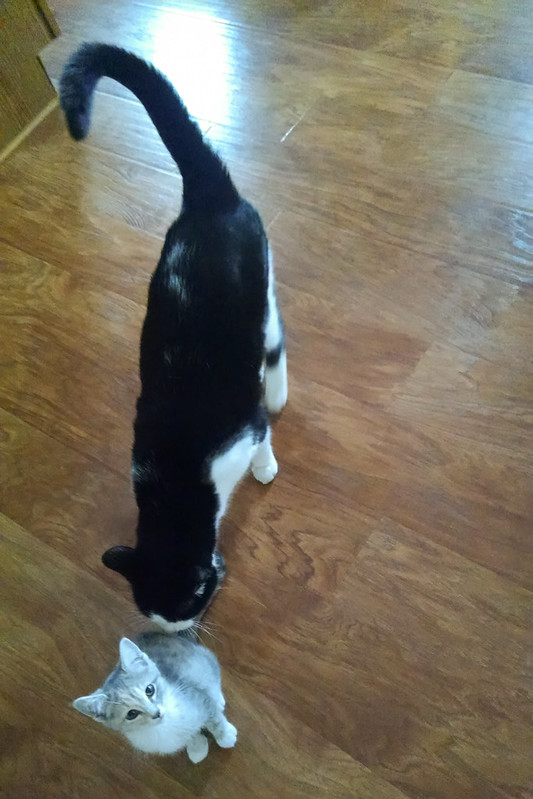 Folks have been asking how Sugar and Spice are getting along these days with Zeus, and vice versa. I’m happy to say at this point it looks like integration is fairly complete. Zeus stopped automatically hissing every time he saw the kitten some time back, and now the kittens go up to him on a regular basis and do the nose bop thing. They are not as chummy with Zeus as they are with Daisy, but then, Daisy feels very maternal toward the kittens and that has an influence. Be that as it may, I think we’re on the downward slope of the acclimation hill. Zeus knows the kittens are here to stay.

The Toronto Star newspaper has decided to nix comments on its Web site. The reason:

We have passionate, opinionated readers who are eager to get involved in conversations about politics, education, municipal issues, sports and more. You’re talking about the news on thestar.com, Facebook, Twitter, Instagram, Snapchat, Tumblr, LinkedIn and more — and we want to be able to capture all of these conversations.

With that goal, we have turned off commenting on thestar.com effective Wednesday and instead we’ll be promoting and showcasing the comments our readers share across social media and in their letters and emails to our editors.

This is a polite and deflect-y way of saying “Our comments are a raging cesspool filled with the worst that humanity has to offer and you all make us look bad by smearing your feculent mindpoops on our property, so do it somewhere else and we’ll pick the ones we like to highlight.”

And you know what? Good for the Star. At this late stage in the evolution of the Internet, it’s become widely apparent that, barring committed moderation, comment threads trend quickly toward awful and vile, and that their ostensible reasons for existing (“free exchange of ideas,” “building community,” “keeping eyeballs on the site” etc) are not just negated but very often undermined by their content. Very few online sites, news, social or otherwise, benefit commercially or reputationally from their comment threads. There’s a very real and obvious reason why “NEVER READ THE COMMENTS” is a phrase that has gained such currency in the online world.

So why not just ax them? This is apparently the question that the Toronto Star folks asked themselves, and equally apparently could not find a sufficient reason to keep them. Again: Good for them. The site will become marginally more readable, and the newspaper won’t have to task some poor sad staffer to moderate the flood of bigots and/or numbskulls and/or spammers who traditionally populate the comment threads of major news sites (and minor ones, and indeed, any site where they are given a chance to thrive). There’s no downside.

But what about the bigots and/or numbskulls and/or spammers? What of them? Where will they go? Won’t their special snowflake voices be silenced? Well, yes, on the Toronto Star site. But there is the whole rest of the Internet, and creating one’s own outpost to fill with one’s own thoughts — and one’s own thoughts on the news media — is trivially easy. Look! I’m filling my own site with my own thoughts right now! Now, the drawback to the bigots/numbskulls/spammers is that their thoughts won’t get the benefit of being a free rider on the traffic the sites they’ve attached themselves to; they will have to attract readers on their own in the marketplace of ideas.

But that’s not fair! Oh, well. That’s life. Also, it is in fact entirely fair. As I noted to someone elsewhere on this topic, no one is owed an audience. The audience I have, as an example, comes from a quarter century of writing, including seventeen years(!) on this very site. You want my audience? The answer is clear: get cracking, folks.

I mentioned on Twitter last night that the world would largely be a better place if all commenting ability were to be vaporized on the Internet, and someone asked me if I would include my own site in that. I said yes, for the general good of humanity, I would be willing to sacrifice my own site’s commenting ability (and also, that for the first five years of the site, it did not allow comments, and yet it did just fine). It would be hard, but I’m pretty sure most of the people who I like would keep in touch. Email would still exist.

This does not mean, I should note, that I plan to get rid of comments here. I do actually moderate my comments, and because I do — and because there is in fact a community of people here who care for the quality of the site, often as much as I do — this site is in my mind one of the exceptions to the general rule that comment threads suck. It also helps that this is a very idiosyncratic sort of site; if it was all politics (or all tech or all anything) all the time I suspect it would attract more people committed to trolling and being douchecanoes on particular subjects, and also garner more fly-by commenters. But the site is about whatever is going on in my brain, and my brain skips around a bit. Variety of topics is useful.

But I’ll also note that especially over the last few years my patience with comments runs thinner and how I approach them is different. There was a period of time not long ago where I began to dread writing about contentious topics here because I knew it would require me to babysit comment threads, and it would take a whole lot of my time and brain cycles — both of which I could better spend on writing — to plink out obnoxious comments and otherwise act as referee. It genuinely began to affect my overall happiness. I had to change the way I thought about commenting here because of it.

Now I do things like turn off comment threads when I go to sleep, which means I don’t wake up dreading coming to my own site to see what some shitty human has posted on it. If I write on a contentious topic but don’t feel like referring comments, I just plain leave the comments off (which, incidentally, has no measurable effect on how widely a piece is read, as far as I can see). And I’m quicker to mallet comments and punt people out of threads if I decide they’re out of line.

Basically, I changed seeing comments as something “of course” and more as “at my pleasure.” If I’m not going to be happy they’re there, then they won’t be.

Which is a point of view I think more people — and more sites — are beginning to take on: What does allowing comments get me? Does it make me happy or not? Will my site be better for them, or not? In the Toronto Star’s case, the answer apparently was that the site wasn’t better for them, so out they went.

Once more: Good call. I hope more people and sites ask themselves the same questions, and ditch the comments if they don’t measure up.