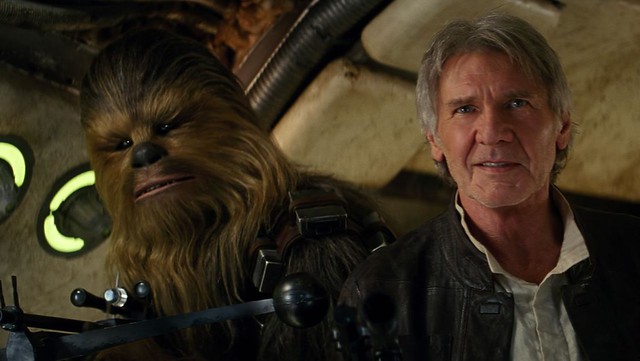 Super-short version: It’s not bad! Best since the original trilogy and arguably better than at least one of those. You’ll probably have a whole lot of fun with this film.

Non-super-short version: Star Wars is that friend of yours who you haven’t seen in a while, who was in a long-term relationship where everything was cool for a while and then things just plain went to hell, and the last time you saw them, they’d kind of hit the bottom. Now you’re seeing them again for the first time in years and before they show up you’re humming a little mantra that goes please please please please don’t let this be awkward and weird like it was the last time we saw each other.

And then they show up! And they look great. They sound great. You talk to them and slip into the groove with them, and they catch you up on what’s been going on in their life, including their new relationship with this fab-sounding person who seems to be doing good things for them. And you suddenly realize that for the first time in years your friend actually seems happy. They’re not exactly their old self again — who ever is, after all those years? — but the things you always loved about them are there once more, and you’re so happy to see them happy again that you almost want to cry.

So, yeah: If you’re a Star Wars fan, that’s how you’re going to feel about The Force Awakens.

This is an immense relief, but also, to use the words of a famous Mon Calimarian, it’s a trap. Because it’s Star Wars, and because you’ll have been used to Star Wars films being terrible for so very long, the highly-polished, super-competent and intentionally entertaining film that is The Force Awakens might feel something like a revelation. Finally, a Star Wars film you don’t have to make excuses for! That you don’t have to mumble something like “well, it’s part of a trilogy, you have to wait until the whole thing is done to see the entire structure” to yourself and others in a vain attempt to overlook massive flaws. This is the first Star Wars film in decades that you can relax into, and just sit back and enjoy. It’s not until the tension of having to pre-emptively rationalize your film choices is lifted that you realize what a burden it has been. The absence of that burden might just feel like greatness.

So: is The Force Awakens a great film?

No. It’s not on the level of great cinema. It’s not on the level of the original Star Wars (which I refuse to call A New Hope because fuck you George Lucas you’re not the boss of me) or of The Empire Strikes Back. It’s not the best science fiction film of 2015, or even the best new installment in a long-running science fiction film series (say hello to Fury Road for both, although The Martian and Ex Machina are in the running for the former). It’s not a great film, and you shouldn’t be relieved into thinking it is.

But it is a pretty damn good Star Wars film, which at this point in the series is exactly what it needs to be. This shouldn’t be overlooked, either.

Things to love (or at least really like): The dialogue, by Lawrence Kasdan, JJ Abrams and Michael Arndt, which for the first time since Empire sounds like words that might actually come out of the mouths of actual thinking human beings, and not merely declamatory utterances designed to fill up space. The relationships, of which there are many — more and more believable relationships in this one single film than in the entire run of the series to date. The care with which even minor characters are developed and seem like actual people, rather than toy manufacturing opportunities given a line or two in the film as an excuse to make parents buy the action figure for a stocking stuffer. The fact that Daisy Ridley and John Boyega’s characters (as well as one other character, who you will know when you see the film) are believably young and act like young people do, ie, make some questionable choices, without doing stupid things entirely for plot convenience.

In short, most of the best things about this movie relate to the characters in it — and the care with which the filmmakers use to make them as real as possible. This is the one thing George Lucas could never manage on his own, partly because he’s a leaden writer (Harrison Ford once famously quipped of Lucas’ dialogue “You can type this shit, George, but you can’t say it”), but primarily because I just don’t think he was that interested in it. He needed characters as chess pieces, not as people. In The Force Awakens, we get characters as people, and their game becomes more interesting.

Things not to like? Basically, the several points where the film has to bow to the tropes of the Star Wars universe mostly for plot convenience and fan service. Yes, yes, lasers and explosions and battles and the cute nods to the previous films, they all have to be in there. I get it (trust me, I get it). But for me all of that was a sideshow to the characters — and think about that! When was the last time you could say that about a Star Wars film? (Empire.) There’s also the fact that almost immediately after I left the theater there were a whole bunch of things about the film that I started to pick apart. Trust me, my friends, if you think the nitpickery of the Star Wars universe was positively Talmudic before, wait until the dust settles with TFA. There will be nitpickery galore.

Here’s the important thing about that last bit: On the drive home, I had things I wanted to nitpick — but the operative part of the phrase is “on the drive home.” When I was watching the film, I was in the film. I wasn’t focused on anything other than where I was. And that, my friends, is the goal. When I was the creative consultant for Stargate: Universe, that was actually my job: To read the scripts early and flag all the things that would throw people out of the story before the end credits rolled. It’s okay for the audience to be nitpicky, just afterwards. Managing that is not as easy as it sounds, and certainly the prequel trilogies never achieved it. TFA does.

Which is a testament to Abrams, his fellow screenwriters and to Disney. When Disney bought Lucasfilm I said that it was “the best thing that could happen, especially if you’re a Star Wars fan.” I said it because Disney, whatever other flaws it has (and it has many) understands better than almost any other studio that the audience must be entertained. You grab the audience, you carry them along for two hours, you keep them busy, and you drop them off at the gift shop when you’re done. Disney is relentless about this, and they’re not stupid about it, either, which is to say, Disney doesn’t treat its audience like marks, to be hustled. It treats them as opportunities for a long-term relationship, involving the transfer of cash to Disney.

Cynical? Well, yes. But, look, if what that means is we get good Star Wars films that aren’t painful to watch and tell a fun story while we’re shoving popcorn into our maws — stories with lightsabers — then I’m okay with that. Especially after having slogged through a Star Wars era where the only thing of interest was the merchandising. We’re getting more out of the Star Wars cinematic universe now than we were with Lucas. I don’t see this as a bad thing. “By the sweet and merry mouse above, you will be entertained,” I wrote, when the Disney deal for Lucasfilm was announced.

I was right. I was entertained. And because of the focus on characters in The Force Awakens — a focus I expect to continue through Episodes VIII and IX, and in the new “anthology” films — I am optimistic I will continue to be entertained in the Star Wars universe for a good while yet. I can’t tell you how giddy that makes me.

I don’t need greatness from Star Wars. I just want to have fun with it. And with The Force Awakens, I did. I’m glad my friend is back, and happy.

123 thoughts on “My Non-Spoilery Review of The Force Awakens”