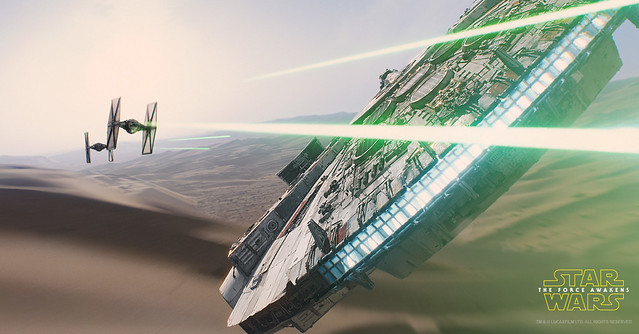 As explained by me to my wife as we drove home last night from The Force Awakens:

Me: See, the reason the bad science in Star Wars films doesn’t really bother me is because the movies tell you right up front that they’re based on legends, right? “A Long Time Ago In A Galaxy Far Far Away.” That’s the film saying “Hey, look, we know that some of what you’re seeing is totally unbelievable, but it’s myth. It’s an exaggerated version of what really happened so long ago that we can’t ever truly know what really happened.” Like, so, the Death Star probably wasn’t really the size of a small moon and Alderaan wasn’t really blown up, it’s was just probably heavily carpetbombed or something. So if you go in knowing it’s all meant to be exaggeration and myth, then all the parts like [SPOILER] and [SPOILER] in this film are totally excusable. Getting mad at Star Wars for getting the science wrong is like getting mad at Clash of the Titans for getting science wrong. You see what I’m saying.

Krissy: So does this mean you’re also willing to forgive “Red Matter” in Star Trek?

Me: OH HELL NO

← Happy Athenamas to All
By Request: A Spoiler-Filled Discussion Thread for The Force Awakens →