Today I saw a rant on Reddit about me ruining science fiction, and I was all, "YES I AM AND I WILL RUIN IT FOR ANOTHER 13 BOOKS AT LEAST"

But, yeah. If you think I'm ruining science fiction you're just gonna have to suck on that shitsicle for another decade at least. Enjoy!

(To be fair to Reddit, someone there was merely excerpting the rant from elsewhere. It's not Reddit's fault! This time!)

I'll note the fellow whining I was ruining SF was also self-evidently racist and sexist, so I'm ESPECIALLY glad to ruin SF for that jerk.

Seriously, words can’t express how delighted I am to vex and annoy bigoted turds like this one, simply by existing and publishing. Because I do exist. And I will publish! The contracts are signed! Barring death itself, there is no way to stop the decade-long flood of my ruination of the science fiction! Best of all, I don’t have to do anything other than publish to irritate this sad sack of crap. And I was going to do that anyway. It’s the perfect storm of least effort on my part.

Here’s the thing: If I ruin the genre of science fiction for you, or if the presence in the genre of people whose politics and positions you don’t like ruins the genre for you — the whole genre, in which hundreds of traditionally published works and thousands of self-and-micro-pubbed works are produced annually — then, one, oh well, and two, you pretty much deserve to have the genre ruined for you. It doesn’t have to be ruined, mind you, because chances are pretty good that within those thousands of works published annually, you’ll find something that rings your bell. And if you do, why should you care about the rest of it? It’s literally not your problem. Find the work you’ll love and then love it, and support the authors who make it, hopefully with money.

But if you’re determined that I or any author, or feminists or socialists or whomever are ruining the genre, then you’ve given those people the power to ruin the genre for you, whether they care what you think or not, or whether or not they even know you exist. And, speaking personally, if a sexist, bigoted cloacal squirt of a human wants to give me that power, then sure, I’ll be happy to ruin the genre for them through no additional effort of my own. Why, yes, I am destroying science fiction! With glee! And I’m going to be destroying it a lot over the next ten years at least. 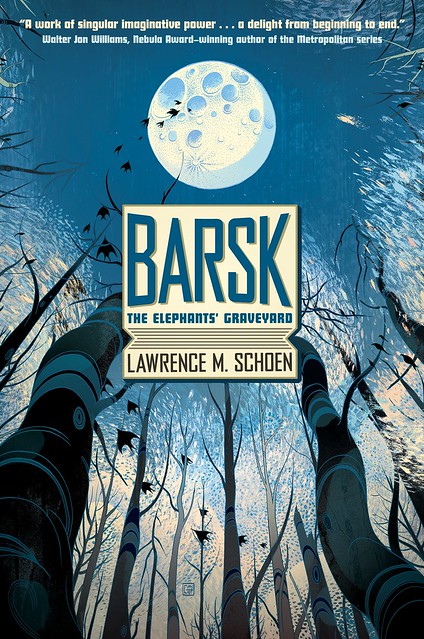 Here in the last week of December 2015 books are still coming out, and here’s a very interesting one indeed: Barsk, by Lawrence M. Schoen. For the Big Idea behind it, Schoen looks at memory, and what it has to do with you, me, and sentient elephant-like creatures on another planet.

I like to think there are lots of cool ideas in Barsk: The Elephants’ Graveyard, from using prophecy to travel in time, to showcasing anguish via a character who cannot feel pain. It’s like I was saving up ideas to put them all in this book. But the biggest idea, the one that filters through all the others, is memory as a physical thing distinct from our bodies and yet bound by the laws of physics (even if I had to invent some of those laws myself).

I’ve been a cognitive psychologist for thirty years, complete with the terminal degree, a collection of peer-reviewed journal articles, and a towering stack of teaching evaluations to prove it. So bear with me a moment as I give you some background on a topic that fascinates me: memory.

Memory is more than just the place we put the stuff we later choose to call to mind. In part, because that stuff is actually a myriad kinds of things, that apparently get stored in different ways. Memory for faces is one type, and very different from memory for names. Ditto for the memory of how to do a thing (like riding a bicycle) and knowing what a thing is (ooh, look, that thing with handlebars and wheels, it’s a bicycle!). Memory for words obeys different rules than memory for sounds that are not words. I could go on and on like this for hours, but this isn’t my classroom and I don’t think John will let me give you all a test, so let’s move on.

My point is, psychologists have been carving up the memory pie since the late 19th century when Hermman Ebbinghaus kicked up a fuss looking at what affected his efforts to memorize nonsense syllables. For purposes of my Big Idea (and Barsk) though, I want to focus on two slices of that pie: what are typically called semantic memory and episodic memory.

Semantic memory is the stuff you know. It’s names and dates and facts that you can look up in an encyclopedia or google on your smartphone. It’s objective data. Whereas episodic memory is subjective; it’s your personal experience of something and includes not just the what of memory but also the who and the where and the how did you feel at the time. Knowing who John Scalzi is is semantic memory. Remembering the first time I met him at a Worldcon is episodic. The former type of memory is colorless, the latter is potentially filtered through all sorts of emotional and intellectual states-of-being present at the time the information was encoded, and prone to modification and embellishment each time it’s recalled. And because episodic memory is subjective, even if you were there, in the room at the same time, your memory of the event will be different from mine because we’re different people.

Consider for a moment that this kind of personal memory defines who we are as individuals; each of us is a unique organization of information, collections of experiences, that owe nothing to the basic physicality of our bodies or our longevity. To run with this idea, I only had to fudge a little bit and invent a new subatomic particle, which I named the nefshon, a “particle of personality.”

Imagine that every instant of your life you’re producing nefshons, representing every experience you have. Each particle is a cluster of information that tells your unique story at that moment in time. The people you shared that experience with also produced their own nefshons of the event. Now here’s the fun part: your memory of those people is made possible by sharing nefshons. You received some of theirs, and likewise parted with some of your own. Seen in this light, your identity is made up not just of your experiences but also contains pieces of everyone you’ve ever met.

That’s fine, but so what? Thanks for asking.

If who we are, if the essential thing that is you, is an elaborate and totally unique organization of information encoded on those subatomic particles — unreliant on your meat body —you transcend death. Breathing your last breath and joining the choir invisible does not mean the information that defined you is gone. Your nefshons don’t care about rigor mortis. At most, your being alive held them together in a common cluster, and your death just means they’ll disperse, much like other particles would. A handy analogy for this is starlight. The information contained in each of those points of lights has traveled vast spans of time and distance to reach you and be seen, even if the star they came from is long gone. Like those particles of light, each nefshon still possesses the information it did from its origin, unaffected by time or distance of the wetware from which it sprang.

In Barsk there is a drug that grants its users — let’s call them Speakers — the ability to perceive and manipulate nefshons, to reach out into the ether and summon the bits of information from a specific person. If a Speaker draws enough of your nefshons together, they combine to produce a simulacrum of the original you, one that has your knowledge and personality and in all respects is you, except for the minor fact that it lacks a physical body. My protagonist, Jorl, is one such individual, a historian who can actually conjure up figures out of history and speak to them, or more simply converse with his best friend whom he believes killed himself but won’t say why, and lo, we’re off and running with a major plot thread for the novel.

The Big Idea here is that we aren’t defined by our bodies but rather by our experiences, that each of us is a unique organization of information that transcends mere physicality. Considered in this way, death is not the end of us because it doesn’t unmake that organization. Moreover, like light from a distant star, the information of who we are still exists, just waiting for someone with the means of perceiving us as we spread out through the universe, each of us immortal, waiting to tell our story.

So, forget about aliens learning about us because they’ve watched our television transmissions; if they’ve worked out the technology they’re going to pass on reruns of Gilligan’s Island and zoom in on the highlights of your life. Whether it’s the awe and transformation of holding your child for the first time, or the warm memory of the day your grandfather came to visit and bought you that ice cream cone, or that night in the backseat of the limo after the junior prom when your world changed forever. All your memories will still be out there, long after you’re not.