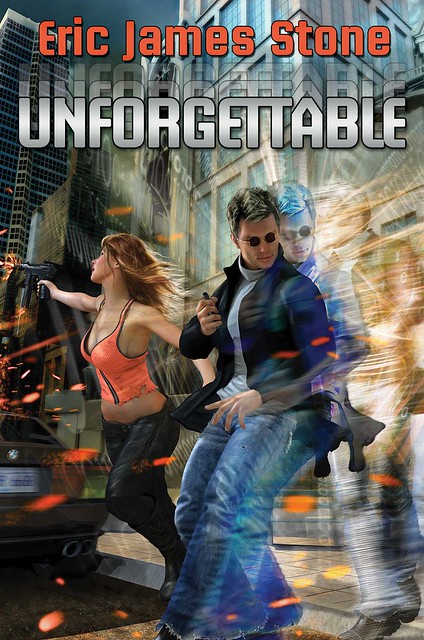 Welcome to the first Big Idea of 2016! And while the title of Eric James Stone’s novel promises that it will be Unforgettable, Stone asks an opposing question: If you wanted to make a character who was destined to be forgotten, how would you do it, science fictionally speaking?

When I came up with the idea of a hero who couldn’t be remembered after he was gone, I needed an explanation for what caused that effect.

I’ve had several stories published in Analog Science Fiction & Fact, a market that offers mainly hard science fiction, so I can come up with scientifically rigorous explanations for various story elements. But Unforgettable was not intended to be hard science fiction — it was really more of a superhero novel, albeit with a rather weird superpower.

I toyed with a biological explanation involving pheromones, but eventually decided to use quantum physics.  I’ve always been fascinated by some of the weirder aspects of quantum mechanics, like superposition and wave function collapse. My wife is a high school physics teacher. Before we met for our first date, I told her she would recognize me because I would be wearing a tee-shirt with a physics joke on it. She said, “OK, but if it isn’t funny, I’m leaving.” The tee-shirt showed a wanted poster with a picture of a cat, and it read “Wanted: Dead & Alive — Schrödinger’s Cat.” (Fortunately, she found that funny enough that she didn’t leave.)

Nat Morgan, the hero of my novel Unforgettable, is the personification of such a glitch: he exists in a superposition of being there and not being there, and once he’s gone the wave functions of the minds of everyone he’s met always collapse to the version in which he wasn’t there.

Once I had my theoretical explanation in place, I proceeded to work out the implications of Nat’s superpower. Figuring out the rules for what happened when he interacted with people helped me to develop scenes that showcased the rules, so the reader would come to understand them.