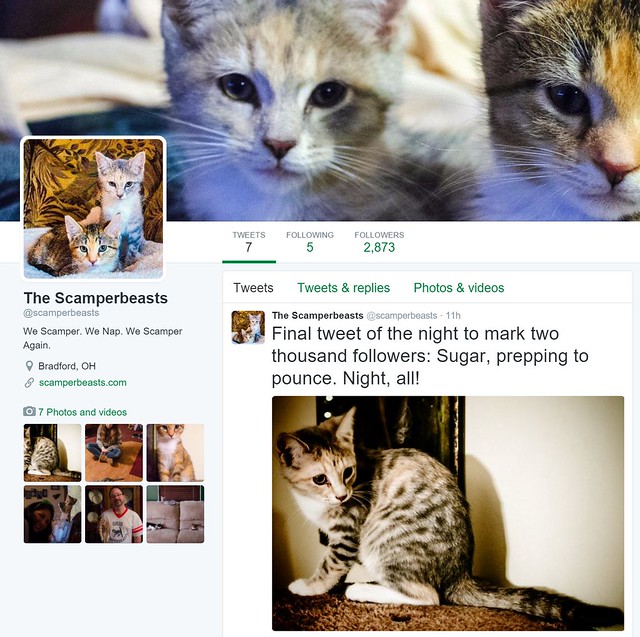 Someone last night made a jokey comment on Twitter about the Scamperbeasts having their own account on that service, which served as a reminder to me that I should probably get on that before someone else did (someone else made a Twitter account for Ghlaghghee, after all).

So I did, and as of this morning it has almost three thousand followers, which is amazing and also pretty ridiculous. Be that as it may, I do intend to keep the Scamperbeast twitter feed active with pictures of Sugar and Spice (with likely cameo appearances by other members of the Scalzi household), so if you’re on Twitter and a fan of the Scamperbeasts, well, you know what to do.

Also done last night: Scamperbeasts.com. Which was not taken already, which was vaguely surprising to me. I honestly did not think I had thought up the term “scamperbeasts,” but a Google search on the term turns up nothing but references to my kittens, either by me or others, so: Hey, look! I mades up a new word! Uh, maybe. And if I didn’t make it up, I own the first 10 pages of Google listings about it, so it’s pretty much the same from the point of view of the Internet.

← I Had Such Ambitions For This Week On Whatever But Instead I Used My Brain To Write 12,000 Words on the New Novel, So, Look, Here Are the Scamperbeasts
Well, Look Who Just Showed Up For Work →