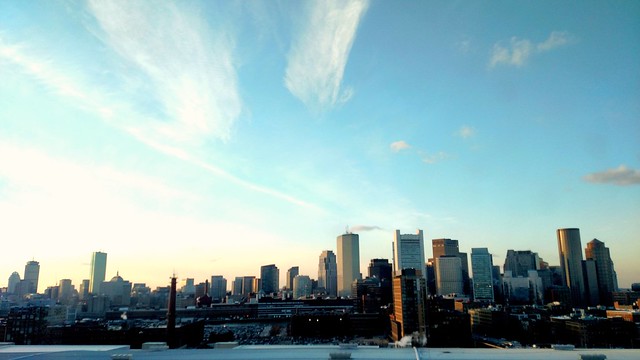 Not a bad view of Boston’s downtown, either.

In other news, hello, I am in Boston now, for Arisia. See you there.

Like most Americans, my first cognizance of him was in Die Hard, which he could have stolen away from Bruce Willis if he’d wanted to, but gracefully didn’t, merely choosing almost to do so (he even let Willis’ character win in the end, which was nice of him). He did steal away Robin Hood: Prince of Thieves, and a damn good thing, too. And of course as Snape in the Harry Potter films he was simply definitive — a tragic bad guy who ended up not bad, but complicated, and still tragic.

But my favorite Rickman performances were not him in villain mode. I loved him in Galaxy Quest as the actor who knew he had slummed but found out just how much his performance meant to people (and one alien in particular), in Sense and Sensibility as a man whose kindness and longing was hidden behind reserve and regret, and in Truly Madly Deeply as a man who loved so much he came back from the other side of death, only to learn that he still had to let go. Rickman was a great villain. He was even better playing away from that.

What a lovely actor. I’m glad I got to see his work. I’m sorry to see him go.

Here at the Dayton airport for my first trip, and first convention, of the 2016: Off to Boston for Arisia, where I’m the author Guest of Honor. If you missed it earlier, here’s my schedule when I’m at the convention. If you’re in the Boston area, it’s not too late to get membership and hang out with a bunch of nerd. Come on, it’ll be fun.

Tangentially, today the Oscar nominations have come out. I usually do a writeup of my first pass predictions when that happens, but I’m travelling today so that will be delayed. Look for it either later today or tomorrow.