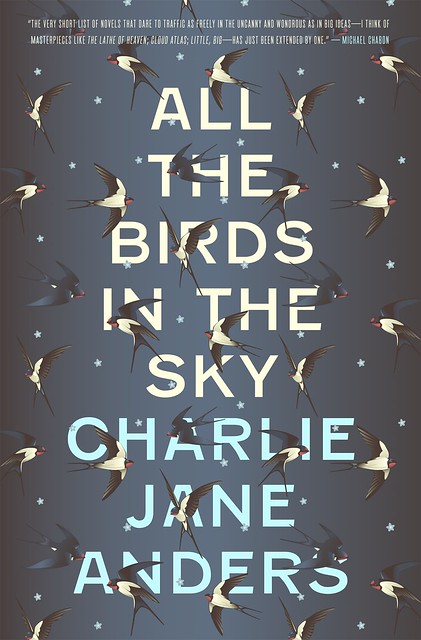 How many times have you heard a new book, or movie or TV show, described as “X meets Y” where the two variables are something super-popular, jammed into one? As Charlie Jane Anders discovered in thinking about her new and already widely-lauded debut novel All the Birds in the Sky, there are limits to all that jamming, especially when you want to make your own mark.

Genre mashups are everywhere in pop culture these days. Star Wars is a samurai Western in space, with wizards. Adventure Time is a post-apocalyptic fairy tale. And superheroes, of course, are every genre ever, all smushed together.

But I’m here to tell you, as someone who often gets accused of writing genre mashups, that you should avoid them at all costs. Don’t take two genres and smush them together. Instead, it’s way better to take whatever you need from different genres, and create your own brand new story.

At least, that’s what I decided while writing All the Birds in the Sky, my new book about a witch named Patricia and a mad scientist named Laurence. At first, I was thinking of this book as very much a mashup: fantasy meets science fiction. But the deeper I got into the story and the characters, the less helpful it was to think of it in terms of genres.

Instead, I started thinking of it as a story about people from two different worlds, each of which I tried to make as real and grounded as I could.

I had already gotten a rep for smushing together different genres, before I finished All the Birds in the Sky. I wrote “As Good As New,” which was a post-apocalyptic story where a woman named Marisol finds a genie in a bottle. (Because of course a genie in a bottle would survive the apocalypse, and its hiding place would be reduced to rubble. It’s just logic, people.) And my story “Palm Strike’s Last Case” takes a dark, gritty urban superhero and sends him to another planet, where he deals with issues of food scarcity and sustainable farming.

So when I started to write a novel that had a fantasy hero and a science fiction hero, I got excited about including as many tropes from each of those two genres as I could think of. The witch can have runes, spellbooks, wands, dragons, elves, ancient curses, evil wizards, etc. The mad scientist gets aliens, robots, spaceships, rayguns, dinosaurs and so on.

But when you just smush a bunch of genre tropes together, you end up with something kind of spoofy. It starts to feel like you’re just making fun of the genres, instead of exploring what makes them powerful. And instead of bright vivid contrasts, you can easily end up with an indistinct mish-mosh. (Like, an elf is sort of an alien. A dragon is sort of a dinosaur. Unless you really work at developing the aspects that make them different.)

If you’re not careful, a genre mashup can very quickly become just kind of an exercise in meta, commenting on the genres instead of using them to their full potential. When you think of a mashup, what immediately comes to mind is the stereotypical Hollywood executive saying, “It’s Alien meets The Smurfs!” Or “It’s Eternal Sunshine of the Spotless Terminator!”

But what’s really interesting about bringing together characters who belong in different worlds—or different types of stories—is the different ways that they look at life.

And with both my witch and my mad scientist, what turned out to be interesting is what they can’t do. Instead of getting lost in all of the cool stuff that could be on their horizons—the starships and spellbooks—the most powerful stories came from their limitations. What can Patricia, the witch, do that Laurence, the mad scientist, can’t? And vice versa? And what’s the thing that’s beyond both of their capabilities? The more I thought of these characters in terms of their limits, the deeper I could get into the emotional core of the story.

And that’s the biggest thing that took me away from thinking of All the Birds in the Sky as some kind of genre chimera. I needed to feel something, to connect to these two main characters and their struggles in my gut as well as my heart. The bells and whistles risked pulling me away from the characters, instead of helping me connect to them.

And in the end, having an emotional core didn’t just mean focusing in on my two main characters and their emotional reality. It also meant recognizing that no matter how many genres I was drawing on, I still had only one story, with one single axis, and everything needed to be part of that.

And once I recognized that, I could focus on what those different genre elements meant to me, and what they represented in my story. I peeled back all of the extra clutter, until I was left with the things that I absolutely needed to make the story work—and then I had to figure out what those elements needed, in terms of worldbuilding, to make them feel real. Like, Patricia, the witch, needed a magic school to go to, that couldn’t just be a Hogwarts clone, and a world of magicians that felt lived-in. Stuff like that.

Once I stripped away all the excess clutter that I had put in when I thought this was a “mashup,” there were big holes in my novel. And those holes turned out to be the places where I was shortchanging my main characters and not giving them enough room to breathe and develop their relationship. When I let go of the idea that this was a book about genres, I was able to start thinking of it more as a book about people.