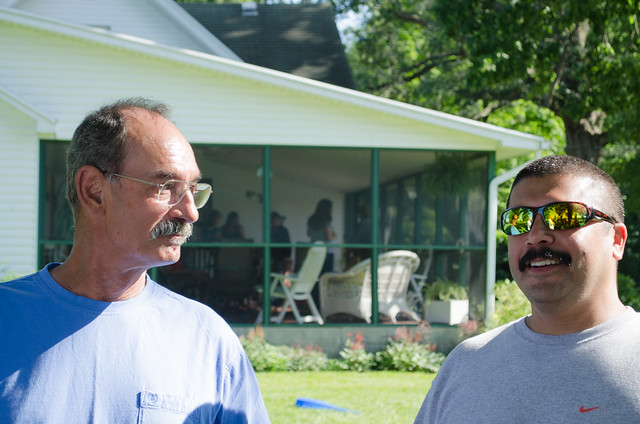 A brief note here to note the passing of Tom Louis, Kristine’s uncle (shown here with Richard Alvarez, my brother-in-law, at family gathering), whose memorial service I’m about to head out the door for. Tom was pretty much the definition of “salt of the earth” and cared deeply about the family, and was always kind and decent in the way he treated everyone I ever saw him with. It was good to know him and good to have him as part of the family I was fortunate enough to marry into. I’m going to miss him and his good humor.

This where I remind you to let those you care about know what they mean to you in your life. It’s never not a good idea. And if they already know, remind them again. That’s always a good idea, too.

For various reasons that are not relevant at the moment, we needed a rental car for the next several days, so Krissy ordered one. I think she ordered up something along the lines of a Honda Accord; the rental place, however, spontaneously and without additional cost upgraded her to the brand new Ford Mustang convertible that you see here. Such is the inherent power of my wife. Fear her.

(Well, either that or it’s the fact no one rents convertible sports cars in Ohio in winter, which means it was on the lot when all the Accords were out. But still.)

I’ve never been much of a car person but I’ve always had a thing for Mustangs; in high school my friend Rob Lawrence drove around a ’65  and we had many adventures in that thing, and the residual good will I’ve had for the brand has continued on. I had a crush on the Bullitt Edition, and at one point I came very near to agreeing to write a book in exchange for a Mustang, the kibosh of which was put on by my wife, who pointed out that a) we already had two cars in a two car garage, b) I was the stay at home parent, so I would end up driving the minivan anyway while she drove the ‘stang, so maybe wait until the kid was a little older. So sensible, Krissy is.

More recently, in the wake of my contract with Tor, I considered buying Krissy a Mustang convertible, much like the one above, as a celebration gift and to acknowledge that the contract, and the excellence of my life in general, wouldn’t have happened without her. When I surreptitiously sounded her out about it, however, she indicated that she wasn’t in love with Mustangs like I was and that she could wait until Athena was in college for a car upgrade. Sooooooo, no convertible. Yet.

(As I never mentioned this to her before, when she reads this, this will be the first she knows of my plan — or more accurately, as she usually knows what I’m up to regardless, the first time I’ve acknowledged the plan. But! What Krissy has now is a convertible coupon, redeemable at the time of her choosing for the convertible car of her choice. Because she’s wonderful and the reason my life is also wonderful and also she would look sooooooo hot in a convertible. Love you, baby!)

Anyway, I’ve been driving Mustang about, marking really my first time in one of these vehicular creatures, and my verdict is… it’s nice, but I’m not entirely sure it’s me. By which I mean I get in the thing and while I still appreciate it looks cool and has a nice low rumble and the sixteen-year-old me is giggling, but the 46-year-old me can’t help notice there’s very little trunk space, no one under the age of six will want to be in that back seat — which you have to climb into, incidentally — and it gets something like 20 miles to the gallon. It’s the back seat especially that gets me. I’ve got a Mini Countryman, which is shorter than the ‘stang by a not inconsiderable margin, and yet it has four doors and legroom for actual humans in the back seats. And 27 miles to the gallon or such.

And also, let’s be real, I’m unlikely to get on the road and open the throttle and hoot madly as I do 130mph, trailing Ohio State Troopers behind me like angry flashing bees. That’s not who I am. The who that I am is really looking forward to electric cars that drive themselves because fundamentally I don’t much care about driving, I care about getting to where I want to go, and I would be delighted to have an automated automobile get me to where I’m going at a safe, unflashy, practical speed while I sat in it and read a book. That sounds pretty awesome to me, actually.

All of which is to say that while I’m enjoying the Mustang on a temporary basis — who wouldn’t? — I’m also of the opinion that on a more permanent basis, it’s probably not the car for me. I mean, I could be wrong. Someone buy me one with all the bells and whistles and we’ll see if I change my mind! But for the next car I buy for myself, it’s not on my radar. Which makes 16-year-old me a little sad. But then, 16-year-old me wanted a lot of things 46-year-old me would happily pass on. This is another one. If 16-year-old me gets too loud about it, we can always rent a Mustang again for a few days. That should do the trick.