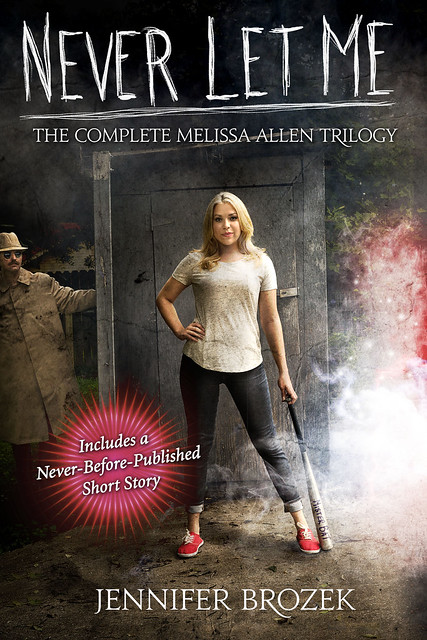 A question that authors often ask themselves: Who am I writing this book for? For Never Let Me, a compilation volume of novels by Jennifer Brozek, the author discovered who she was writing her series for — which included, among others, a very specific set of people.

There were two motivating factors behind me writing the young adult novels starring Melissa Allen. The first was: Write what you want to read. In my not-so-humble mind, I liken Never Let Me to “What if Stephen King specifically wrote for teenagers back in the day?” I read a lot of King’s work growing up and loved it. Part of me always wondered what if he had written a story specifically for me as a teen? I pondered what I thought that would look like. Then I wrote it because that’s what I wanted to read.

The second factor was the need to write a flawed, mentally ill character whose mental illness didn’t make them a superhero or a villain. It just was. The illness was one more invisible, personal thing to deal with—like migraines or gastric reflux. Too many times, mentally ill characters are taken to unrealistic extremes—savant, dangerously wicked, innocent to the point of child-like—when, in reality, they are just normal people trying to get through the day. They are medicated, dealing with side effects, and know that even when the chemical cocktail is working today, it might not work tomorrow.

In specific, I watched daughter of one of my friends—her name is Cait—grow up fighting with her illness, dealing with the side effects, and sighing over the issues with her psychiatrist. I helped her as much as I could. I never thought it was enough, but I didn’t know what else I could do.

Cait stuck with me all these years, even after I moved away from her. I knew that she never had a mentally ill protagonist in any young adult book she’d read that she could look up to. I wanted to write this series for her, and for the other teens like her who struggle with mental illness on a daily basis. I wanted her to see the heroine in herself.

I never thought of myself as a heroine. Growing up, I had a lisp and a stutter. I went to three years of speech therapy to bring my speech into something much more acceptable. I’m dyslexic. Also, I am high-functioning autistic. I never saw a protagonist like me in any of the stories I read. For a long time, it didn’t occur to me that someone like me (or Cait) could be a hero. People like us weren’t heroes.

I wanted to change that. At first, it was just for Cait. She was the one I’d written the novels for. She was my ideal reader. Then, as I expanded the stories and the protagonists, I added a character for my mom. This character has a congenital defect in her hand like my mom. My mom didn’t have a hero like her to read about growing up. I thought she deserved one, too. In the end, when I sat back and looked at what I’d written, I realized my Big Idea.

I was the one I had written these novels for… because they were about people like me and about the everyday people around me. I wanted to see fictional heroes that mirrored the real life heroes I looked up to every single day of my life. Including the person I looked at in the mirror. She may have a stutter when she gets excited. She may rock when she’s tired. She may not always understand the expressions she sees on people’s faces. She may have bouts of anxiety… but she is still a hero.

Sometimes, we write the heroes we need to see in ourselves.