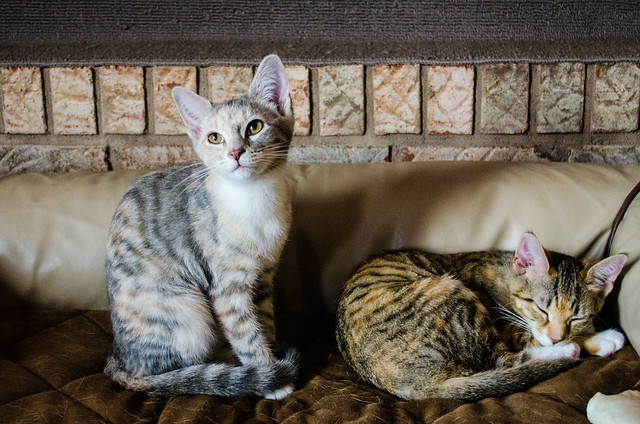 The Scamperbeasts Twitter account passed the 5,000 followers milestone today, which is a nice round number considering it’s only been around for a little over three weeks. People love kittens.

In commemoration of this achievement, and also for the betterment of the Twitter experience in general, I made the following announcement:

New rule for jerks trolling me: If you have fewer Twitter followers than my kittens the @scamperbeasts, it's an automatic ignore and mute.

Because, you know what? If you’re going to be the sort of jackass whose idea of a fun time is to troll and/or insult me on Twitter, I think it’s entirely fair for me to introduce a filtering process, dictating whether or not you rate any of my attention at all, involving kittens.

Why the somewhat arbitrary choice of using my kittens’ Twitter follower number as the filtering criterion?

2. Because it amuses me to say to myself, as I mute these twits forever, “Come back when you’re not thoroughly trounced by kittens.”

(Not that I will unmute them if they do get more followers than my kittens, mind you. It’s totally meant as a dismissive statement.)

Formally codifying this into The Scamperbeasts Rule:

My adopting this new Scamperbeasts Rule means that roughly 99+% of all possible Twitter trolls/jerks fall into the automatic “ignore and mute” category, as the Scamperbeats have more followers now than more than 99% of all Twitter users. Which is useful because honestly I’m tempted to snark at these jerks before I mute them forever. As enjoyable for me as that can be, it ends up taking brain cycles more profitably used in other endeavors. The Scamperbeasts Rule is a time management tool for me, basically.

(And what will I do with the would-be trolls who do have more followers than my kittens? My plan is to condescend to them once and then mute them, and bask in the knowledge that they are henceforth wasting their time only, trolling into a blank wall.)

Now, The Scamperbeasts Rule will not necessarily work for everyone, but if you do think it could work for you, I heartily encourage you to employ it. Just the pleasure or looking at someone spewing bullshit at you and thinking sorry, you’ve been bested by cats before you consign them into oblivion is reason enough to use it. I’m looking forward to it being my own standard practice.

38 thoughts on “The Scamperbeasts Rule”