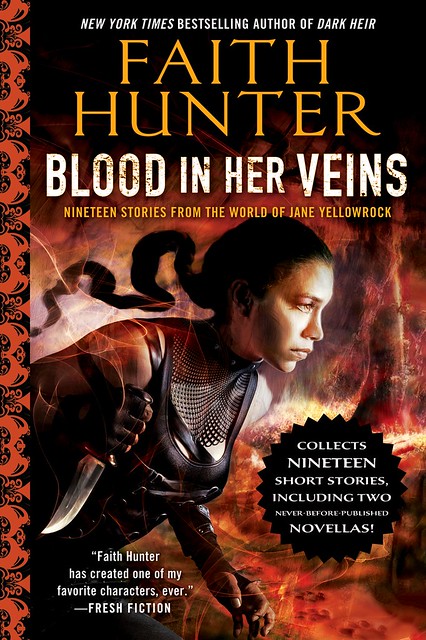 For today’s Big Idea, and for her book Blood in Her Veins, author Faith Hunter gets under the skin of her main character, and reveals why that character is often of two mind about many things.

Big Ideas are exciting and scary and sometimes dangerous. So, of course, I dare, perhaps far too often, in life and in writing. In life, it’s whitewater kayaking. In writing, I dared to create a series about a character who has two souls and two distinct voices.

Mind you, to me, voice is one of the most important things in writing. Together, authorial voice and character voice create and support so many of the other elements of writing—from tone, to atmosphere, to point of view, and even to character development. Two different voices meant two different … everything. Two different character arcs, two different reactions to conflict, two different thought processes, two different worldviews and two points of view. My two voices weren’t even the same species—the character I envisioned was a human with a mountain lion soul intertwined with hers.

My human character is Jane Yellowrock. She’s a Cherokee skinwalker (the version from the oldest pre-European, Eastern Cherokee, storylines). My fictional take on the old tales made her a being able to assume the shape and form of any animal for which she has sufficient genetic material, always keeping in mind the law of conservation of mass/matter and the peculiarities of genetics. This means that Jane’s magic is best suited to creatures of her own size/mass and gender. I like the physics and the genetics of my magic systems to feel internally consistent.

An orphan, raised in a Christian children’s home, with all the guilt, remorse, sexual hang-ups, and self-reproach that come with that, Jane starts out as a hunter of insane vampires—vamps who attack and kill humans. The series opens with her taking a job for the Master of the City of New Orleans, an apex predator blood-sucker with no hang-ups at all.

My mountain lion character is Beast, a contrary, opinionated cat (also an apex predator, like Jane’s new boss), who has very specific likes and dislikes. She loves hunting and a fresh kill, tolerates thawed steak—raw—and hates cooked meat. She loves lying on a rock in the sun, wants to hunt alligator the moment Jane and she arrive in Louisiana, finds vampires enticing, and likes nothing better than for Jane to go on long rides on her Harley, Bitsa, so she can take in the smells and claim territory, even if just temporarily. She also has strong feelings about Jane’s love life and what kind of person Jane should choose as mate. Beast is feisty, determined, and a killer, without the conscience, contrition, or self-reproach of her human-ish host. Even when she’s in human form, Jane can feel/hear Beast’s opinions, and she both battles and embraces them.

The way these two characters came together is revealed over the course of the series, beginning with a mountain lion attack in 1839. Jane was five years old at the time, but in that fight for her life, she accidentally worked black magic. She stole both the body and soul of the puma who attacked her, and inhabited the big-cat body for two hundred years, her magic keeping them alive far longer than the usual life-span of a Puma concolor. When Jane finally became human again, Beast was trapped within her. And those two diverse voices are what, I think, has given the Jane Yellowrock series an original tone and an audience that is still growing.

One of the ways I dealt with the two character voices in the first book, SKINWALKER, was to mention Beast—but not let her speak, as a separate character, until page twenty-six. Even then, Beast was permitted only one word. Hungry. And that, only moments before Jane shifted into her Beast form for the first time on the page.

When I write in Beast’s voice, she’s an animal who perceives the world the way a young cat might. Sounds are more penetrating, scents are heightened and powerful, colors and the intensity of light are totally different. Beast can’t see the color red. Jane can’t see in the dark as well as her Beast. Jane would describe a vampire as too pale, too demanding, too dangerous to the public, and a pain in the butt. Beast would describe the same vamp as tasty, a good choice as mate, and a good hunter of prey. Jane would say that blood is red. Beast would say that blood smells good-to-eat.

But I can never forget that they’re in the same body, experiencing the same things, no matter who is at the forefront of their consciousness, and whether they are in human or cat form. Over the series there has been an organic evolution where Jane becomes more like a mountain lion and Beast becomes more like a human. They’ve been broken and shattered in the same way and have drawn strength from each other. And in those moments where they come together and depend on each other, the two distinct voices I have worked to create swap DNA and become the same voice or a hybrid voice. I must admit, that was something I did not expect!

In the course of the now New York Times bestselling series (the tenth book, Shadow Rites, will be published in April), there’s been an emergence of different camps of my readers. Yes, Beast has her own fans, which pleases her enormously. She also has her own point-of-view stories in my nineteen story collection, Blood in Her Veins, on sale today.

I’ve been writing for many years, under various names, and Jane/Beast is the character, bar none, who challenges the writer in me most. Jane / Beast are unpredictable, demanding, playful, and hunters of prey, each in their way and own voices. They are, for me, the Big Idea.