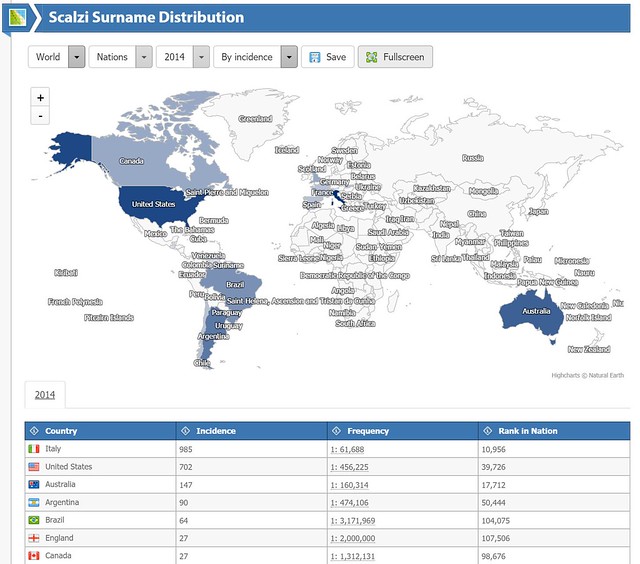 A website named Forebears.io claims to know the number of people who share one’s surname and their distribution worldwide (presumably via publicly available census materials), so I figured, what the heck, I would plug “Scalzi” in there and see what happened.

What happened: If the information on the site is at all reasonably accurate, then there aren’t a whole lot of Scalzis out there — just over 2,000 worldwide, just under half of them (somewhat logically) in Italy, with the US in second place with just over 700 (as a contrast, there are over four million people with the surname of “Smith” worldwide). There are more than four times as many people named “Scalzo” out there. “Scalzi” is, according to this Web site, the 175,162nd most common name in the world.

This doesn’t really tell me anything that I didn’t already know, i.e., that there aren’t a whole lot of Scalzis in the world. I knew that because outside of my extended family I only know of relatively few Scalzis, particularly here in the US, although of course of those there are, the Internet makes them easier to find. Hi, guys!

It also explains why, for all intents and purposes, I am the Scalzi online, which is to say that I’m all over the search engine results for the name. It’s not that I’m all that amazing; it’s that the field of other players with the name is limited. I mean, I’ll take it; I like being very easy to find on Google. But it’s a case of being a big Internet fish in a small online pond. I do once again apologize to all the other Scalzis out there. Sorry for hogging the bandwidth on the name.

Interestingly, my wife’s previous last name, Blauser, is even less common than Scalzi, worldwide, although it has nearly 100 more people using it in the US than Scalzi has. What can I say? We’re uncommon people.

69 thoughts on “The Worldwide Distribution of Scalzis”