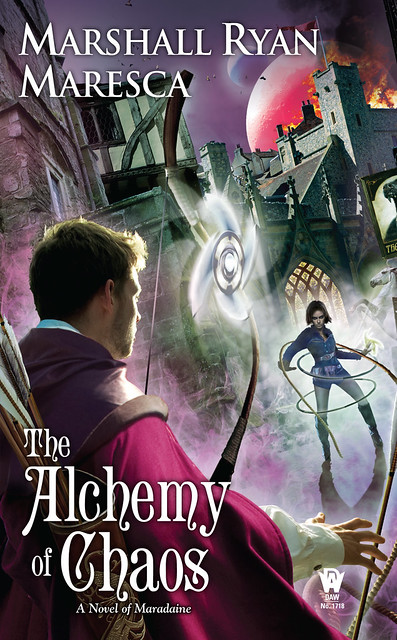 Super heroes are a trope, and fantasy novels are a trope too. So what happens when these tropes collide? Ask Marshall Ryan Maresca — he knows, and The Alchemy of Chaos is the latest installment of just such a mashup.

I’m a total super-hero junkie. I have a steamer trunk in my garage filled with the comics of my teenage years. My favorite shows on television right now are Flash and Arrow. Superheroes are in my blood. That my first novel took the shape of a superhero origin story shouldn’t have been a surprise to me.

But when I first started The Thorn of Dentonhill, I wasn’t planning on writing a superhero book. I was writing a fantasy novel about a magic-student who had a secret life tied to the city’s street gangs and drug trade, fighting his own private war against a drug lord.  It took a while before it was clear to me exactly what The Thorn of Dentonhill was. Boiled down to the High Concept Elevator Pitch: Veranix Calbert is a magic student by day, street vigilante by night. Harry Potter as Spider-man.

The Thorn of Dentonhill was the origin story. Veranix started out harassing a drug lord– Fenmere– for entirely personal reasons.  Trying to disrupt a drug shipment, he ends up stealing two magic items. He decides to use in his fight and becomes “The Thorn”– folk hero for the neighborhood, a symbol to everyone who wants to stand up to Fenmere. He gets Great Power.

When I sat down to write The Alchemy of Chaos, I had fully embraced the kind of story I was telling. It’s a pulpy, action-packed fantasy novel, but it is still a superhero story. More importantly, it’s a superhero sequel.  The Alchemy of Chaos is about what it now means for him to be The Thorn. What he needs to do, what he wants to do, and what doing that could cost him. He deals with the Great Responsibility part of the equation.

So I threw everything I had at him.

Veranix is already overburdened from the start. He’s got several exams, as well as assisting on a special project that he is supposed to be devoting all his free time to. He shouldn’t even be going out as The Thorn, but the drug trade is creeping into the neighborhood he swore to protect.

Then come the pranks. Disturbing magical pranks that start as obnoxious and escalate to dangerous. The first prank affects hits Vernix’s dorm, so he’s immediately engaged. But given everything he already has on his plate, he has to ask himself: Is this his problem? Should it be his problem? Shouldn’t he just trust that someone else, someone official, will take care of it?

So Veranix is juggling as much as he possibly can: exams, special project, stop the drug trade from crossing over and figure out who this prankster is and stop them before the tricks turn deadly— and the small matter of the assassins that Fenmere hired.

This would be a terrible time for someone to figure out his secret identity, wouldn’t it? Especially the strident science student who is at the top of Veranix’s list of suspects.

Fortunately, Veranix does not have to face it alone. Harry has Ron and Hermione, Barry has Caitlin and Cisco, and Veranix has Kaiana and Delmin. They’re the ones who keep his head on straight, distract people so he can slip away, patch him up when he gets beat up, and remind him what he’s supposed to be doing. Of course, Kaiana and Delmin have a very different idea what Veranix is supposed to be doing. Veranix’s real problem is that they’re both right. He’s got to deal with all of it: magic, science, action, exams, assassins, street gangs, and fancy dinners. He’s got to take all that havoc and try to craft it into something that will not only keep him alive, but still in school.

That’s the Alchemy of Chaos.