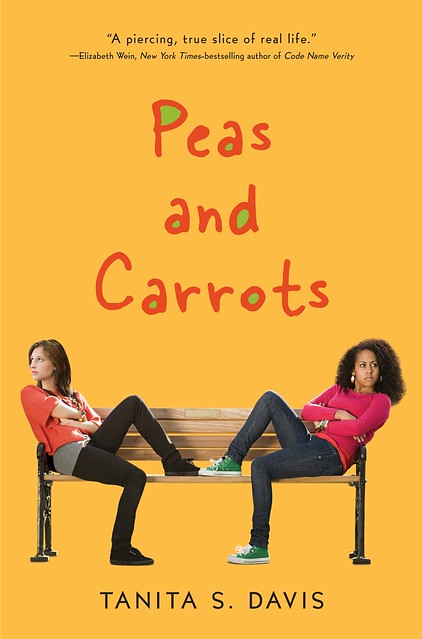 Sometimes people are uprooted and put in new circumstances. How do we adjust, and can we put down new roots that work well enough for us? In her Big Idea, Tanita S. Davis considers this question and how it relates to her YA novel, Peas and Carrots.

There is no super power greater than knowing how to gather friendly, open, likeminded people around us, to use our intention to make our own safe place in the world. But when our relatives are rotten, and intentional choosing isn’t a skill available to us, what do we do then? Eventually, we stop thinking in terms of family, and seek other bonds.

My first teaching job out of college was working one-on-one with students housed courtesy of the State. They were a mixed lot: entitled incorrigibles who had smarted off to a truancy officer one time too many; runaways from intolerable home lives who’d ended up in the sex trade as a means of survival; gang-affiliated kids who looked like hard-faced adults, serving time for being accessories to grand theft and drive-by shootings. They all shared the simple human desire to belong somewhere – for their families to take them back, for the tight group they’d left behind to arrive one day and rescue them from my classroom… Every day that I worked with them, I watched their counselors and therapists and parole officers try to impress upon them the importance of making new connections, of finding different stomping grounds and other things to hold dear.

It was not a message which found a receptive audience. Almost every one of my students had some piece of the past they held onto against all comers, some piece of the world which represented to them all that they’d lost, and all that they would need to make the world right again. And, for almost all of those students, that thing was a representation of family. A location which they defended with fierce neighborhood pride. A faded Polaroid taped to the headboard at every new placement. A ratty old cardigan or piece of baby blanket held onto since childhood.  A tattoo, stick pin applied with charcoal and baby oil; the name of a best-beloved boldly claiming the tender skin of a wrist or forearm. A piece of a past, real or imagined, and long vanished.

Could they realistically be asked to let go of that? Obviously, no. And yet, how could they move into the future if they weren’t willing to let the past go?

What I saw work, during my brief years with these kids, was encouraging them to change perspective. Maybe they couldn’t have the crew they used to run with, but they could find literal running mates elsewhere. Some left the group home and get involved with long-distance running, basketball, tournament teams traveling and learning the feel of that inclusivity in teams. One girl embraced her love of arguing and took a semester to first observe, then begin to participate in her new high school’s debate team. We didn’t always get to see the next chapter in the lives of those with whom we worked, but sometimes we’d get a card or a call, or a social worker would bring back word. The kids who survived the destruction of their networks and didn’t return to the scene of the disaster were those who found and formed new connections, and new ways into what they ultimately wanted the most.

The world can be puzzled by these deliberate connections, these bonds we seek to supplement biology. Your new home may not be where any of you live, and your new family may be made up of what other people would consider strangers on the internet. I remember wheeling my through a crowded Costco shopping center when my sister was less than a year old, and encountering the crooned, “Oh, she’s precious! She looks just like you two!” It was, in this case, both ludicrous and …ludicrously wrong, as my youngest sister is an American of Cambodian ancestry, I’m an American of African ancestry, and my husband’s ancestral leanings are English, Scottish, and Irish. Sooo…maybe not just like us? But, I’m pretty sure that between her eye rolls – she’s nineteen now – and her general mien of disaffected snarkiness, there’s at least a family resemblance.

Peas and Carrots is a book marketed to middle grade/young adult readers and explores intentionally choosing people to love, and accepting each other in spite of our differences. At the end of the day, peas and carrots don’t go together because they grow together –  legumes and umbeliers are vastly different plant families – nor do they look alike or taste alike… They go together because we put them together. And so can we put together a family, too. Maybe blood shapes our earliest parts, but the choices of who we invite into our circles define us further down the road. It’s an absolutely huge idea that we can have some power over our own happiness in finding good, true, family-tested-friends. Love – and family, however we assemble it –  can be a lot simpler than we make it.