More thoughts on what went down in New Hampshire:

* First, that vaguely squelchy sound you hear in the background is the GOP pooping itself because, in fact, Donald Trump is real, and he is spectacular — or at the very least, he thumped the hell out of the rest of the GOP squad in New Hampshire. He outpolled his nearest competitor John Kasich better than two to one, and beat Iowa winner Ted Cruz three to one. Trump’s gonna come out of New Hampshire like the crowing cock he is, and he’s the favorite to win the next GOP primary in South Carolina (FiveThirtyEight says he’s got a 55% chance of winning there; Marco Rubio, his nearest competitor, is at just 19%) and he’s ahead in the polls in Nevada, too, which comes after South Carolina.

This scares the shit out of the GOP establishment — as well it should — but, as I’ve noted before, the rise of a populist demagogue was exactly what the GOP has been aiming at for years. Yet again, for the people in the back: If your party spends decades undermining the legitimacy of government, and of governance, and if you sublet your messaging to radio talk show hosts and news networks whose bread and butter is making old white people scared and younger white people angry at minorities, and if you’ve pandered to that scared and angry core to continue to undermine government and governance in a distinctly non-virtuous cycle, then a populist demagogue as your party’s presidential candidate is probably inevitable.

The GOP’s misfortune is that it comes in the form of Trump, who doesn’t need its money and doesn’t care about the Republican Party in any real sense, except as a rented mule he can whip when it suits him. Billionaires are supposed to fund, not run.  Trump is vulgar and racist and generally horrible but he’s not stupid, and he understands the moment, and the movement, the GOP has provided him. The GOP establishment gave him a car that runs on vitriol. He’s going to drive it hard until it falls apart under him, and he’s not going to stick around to clean up the exploded mess. Why should he?

In short, the GOP only have themselves to blame. They asked for Trump. They’ve been asking for him for years. And here he is.

* Trump is the GOP’s fault, but the rest of the field is the GOP’s problem. Kasich put nearly all his chips into New Hampshire and got a distant second place finish as a payout, but South Carolina as I understand it is likely to be less friendly territory for a Republican who actually thinks occasionally working with the other side is a thing that might be done, and anyway he doesn’t have many chips left. Bush left New Hampshire in fourth place with a plan to have his ads target Kasich and Rubio. Rubio has a fifth place finish and a reputation as a broken machine. Cruz has a third place finish and appeals to religious conservatives, of whom there are many in South Carolina, but if the GOP establishment fears Trump, it loathes Cruz. Everyone else in the race doesn’t matter at this point.

None of the above seem to be targeting Trump very much; they’re more content to snipe at each other for the silver, which works out great for Trump. But more to the point, Trump is vulgar and racist and generally horrible, but the people who like him really like him. Who really likes Jeb Bush? Or Marco Rubio? Or John Kasich? Nobody likes Cruz, but inasmuch as no one really likes any of the remaining undercard perfomers, this hasn’t hurt him as much as it should. So Cruz keeps at it. They’re like drowning men desperately trying to push themselves up out of the water on each other’s shoulders, while Trump is in a speedboat with a model and champagne, encouraging them to kill each other and float on top of the bodies.

I don’t know what’s going to happen in South Carolina. But it’s going to be a long ten days until then.

* On the Democratic side, you know, I’m not gonna lie, I was convinced that Sanders was going to have a larger blowout than he did. Not that 60% to 38% is anything to complain about, mind you. He did great. I just thought it would be more. I think it’s because my Twitter feed is full of Bernie supporters.

In any event, it was long known that New Hampshire was Sanders territory. I think Clinton’s people didn’t do a particularly good job of framing expectations there. For example, here’s a fun fact: Clinton’s 38.3% loss in New Hampshire this year is less than one percent off from her 39.1% win of the state in 2008. So her support in the state is pretty much the same as it ever was. The differences this year: One fewer candidate to slice up the rest of the voting pie, Sanders’ “hometown” advantage, and the simple fact that people in New Hampshire, at least, were more energized by Sanders than by her.

Sanders should capitalize on his momentum because it gets harder for him from here — the Nevada caucus is a question mark (Clinton’s got a big lead there but the state hasn’t been polled since December) and FiveThirtyEight gives Clinton a 95% chance of winning South Carolina. 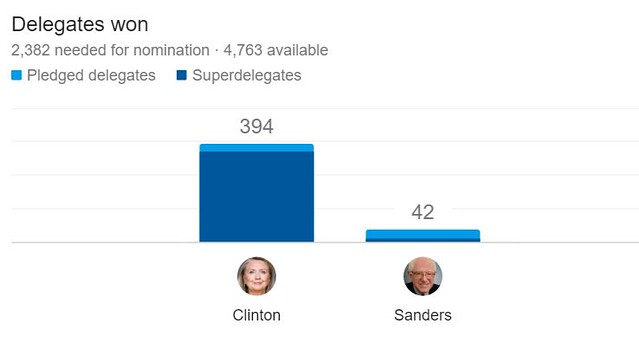 Clinton and Sanders have roughly the same number of pledges delegates at this point, but Clinton has substantially more “superdelegates” (i.e., party bigwigs) supporting her, so she’s far ahead in the delegate count. In fact, thanks to superdelegates, Clinton comes out of New Hampshire with more delegates than Sanders currently has, even though he beat her 60%-38% in the polls.

So, yeah. Sanders absolutely should enjoy the moment. It goes uphill now, and he’s already way behind, and his big victory ironically ended up being a loss, as far as delegates go — which, for the purposes of the Democratic nomination, are the votes that matter.

* Given her structural advantages, do I think Clinton could eventually lose the nomination to Sanders? Well, I think it will be difficult for her to lose it, but then, she’s been a front-runner before and blown it, so I wouldn’t say it’s impossible. 2016 is not 2008, Sanders is not Obama (for a number of reasons), and Clinton, in my opinion, is a savvier politician than she was eight years ago. So I suspect in the end it’s Clinton. But you never know.

One of Clinton’s bigger problems is that people don’t like her, and there are all sorts of reasons for that, many of which are external to her — two decades of conservative revilement, for a start, down to the recent phenomenon of “Bernie Bros,” i.e., ostensibly liberal dudes who still think it’s fine to crap on Clinton for the unforgivable crime of being a politician whilst female. Sexism is still a thing. Sexism isn’t the only reason for people disliking Clinton — she has her faults — but it’s flat out a lie to say it’s not an overlay, just like it’s flat out a lie to argue that racism isn’t part of why Obama has been loathed by many for the last eight years. It does complicate matters.

For all that, if I were a betting sort, I’d still bet on Clinton. But again, from my point of view, whether Clinton or Sanders wins the nomination is immaterial, since both are so vastly superior to anything the GOP has on offer that I’m pulling the lever for whichever of them make it that far.

(But what about Bloomberg? He might enter the race! Sure, and if he does I’ll think about him then. Until then, I won’t).

And that’s a wrap for New Hampshire.

93 thoughts on “The Rest of the Night in New Hampshire”