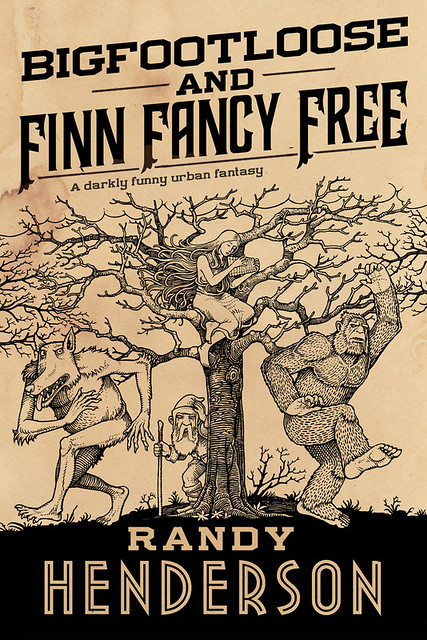 Warning: Randy Henderson nameschecks a lot of questionable movies in this Big Idea for Bigfootloose and Finn Fancy Free. But it’s for a good reason! Honest!

“Hey, what’s the Big Idea?” Finn asked.  “Didn’t we do this for Finn Fancy Necromancy?”

“Yeah,” I replied. “But this is to talk about your adventures since then.”

“Adventures?  Ha!  Excitement?  Ha!  A character craves not these things — or at least this character doesn’t.  Yet some sadistic author apparently gets his thrills by making me run from danger to dating to deathiness.”

“Oh, come on,” I said.  “If I’d just let you retire to Character Heaven you would’ve totally missed me.”

“Right.  I so couldn’t live without you.”

“Actually, if you want to get technical –”

“You know what I meant!”  Finn snapped.

“You act like it’s all bad,” I said.  “But if I hadn’t written Bigfootloose, you wouldn’t have gotten to reconnect with your family.”

“Have you met my family?  No.  You just created them, you don’t have to actually deal with them.”

“Okay.  How about catching up on that twenty-five years of pop culture you missed while exiled in the Fey Other Realm?”

“And you’re welcome!  You got to see Star Trek IV, Robocop, Willow, Die Hard — a ton of great movies.”

“Fine.  What about this: if I hadn’t written you another adventure, you wouldn’t have gotten sexy time with your girlfriend.”

“Whatever.  Aren’t you supposed to be talking about the Big Idea of Bigfootloose, not my sex life, oh master of my fate?”

“Right.  Well, in book one, the idea was just to have fun.  So I guess the Big Idea for this book was: how do I take a novel I wrote just to be fun, and really build the basis for a series?”

“You could have just suddenly made everyone aliens, like in Highlander 2.”

“Sure!” I said.  “Or I could have stabbed my eyes out with a plastic spoon and saved some time!”

“Fine then.  So would you say Bigfootloose is more like Conan the Destroyer, or Beastmaster 2?”

“Very funny.  Actually, I was trying more for Empire Strikes Back.”

“A bit ambitious for you, don’t you think?” Finn asked.

“I just meant this isn’t exactly an epic for the ages you’re writing here.  But it is good to dream.  I guess I should just be happy you didn’t say Wrath of Khan.  Not that anyone would mess with that.”

“What?  No!  Please tell me nobody dared mess with Khan.  Might as well mess with The Hobbit, or Clash of the Titans.  I mean, once it’s done right –”

I cleared my throat.  “SO, as I was saying, in Bigfootloose I wanted to take the world hinted at in Finn Fancy Necromancy and really dig into it, to expand on the cultures and rules of human magic users and feybloods creatures in our world, and the Fey in the Other Realm, and explore the relationships and tensions between the three groups.  And I wanted to dig a little deeper into the characters, and their relationships.”

“Oh, is THAT what you were doing?” Finn said.  “Because to me, you know, it felt like you were throwing me into the middle of a feyblood rebellion and expecting me to not only save the world but somehow find a date for that sasquatch, Sal, all while trying to figure out my own life.  Silly me for completely stressing out!”

“I’m sorry, but people want the adventure, and drama, and sexy time.  Not that you’ve had much of the last bit.”

“Finn, you do realize that your life is literally an open book?”

“Okay, that is totally non-non-non-non-heinous.  Just tell me you don’t plan to cut off my hand or freeze me in carbonite or anything crazy, at least.”