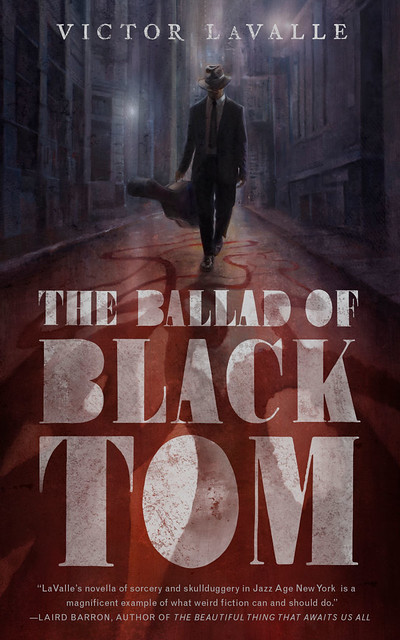 There comes a day when writers discover that their idols can be… problematic. When that happens, is there a way back to understanding and appreciating them, without excusing or minimizing their problem? Victor LaValle has some thoughts on this topic, and how it relates to his novella The Ballad of Black Tom.

I fell in love with H.P. Lovecraft when I was eleven years old. I remember the exact sentence that did it. It’s from the opening of a story called “The Strange High House in the Mist.”

“In the morning mist comes up from the sea by the cliffs beyond Kingsport. White and feathery it comes from the deep to its brothers the clouds, full of dreams of dank pastures and caves of leviathan. And later, in still summer rains on the steep roofs of poets, the clouds scatter bits of those dreams, that men shall not live without rumour of old, strange secrets, and wonders that planets tell planets alone in the night.”

Picture an eleven-year old bookish boy reading in the little apartment in Queens that he shares with his mother, grandmother, and baby sister. His mother is a black woman from Uganda and his father is a white man from Syracuse. His father doesn’t live with them anymore, he returned to upstate New York and stayed there. Their son found a Del Rey paperback copy of The Tomb and Other Tales by some dude name H. P. Lovecraft; he turned to a story called “The Strange High House in the Mist” and read that opening. It was the last thirteen words that caused a seismic rumble in his imagination. “…old strange secrets, and wonders that planets tell planets alone in the night.” That night the kid stared at the sky and tried to imagine what those secrets and wonders might be. He read more of Lovecraft’s stories seeking answers.

That’s how I got hooked. I liked Lovecraft’s monsters, but I loved the ideas even more, the scale of his imagination. Cosmic as fuck. I devoured the rest of his fiction and Lovecraft satisfied me for years. “Herbert West, Reanimator.” A glorious and gross zombie story! “The Rats in the Walls.” Underground cities and revelations of cannibalism! “The Horror at Red Hook.” It takes place in Brooklyn! I know that neighborhood! It was all good until I hit sixteen.

I don’t know what happened in that leap from eleven to fifteen. I lost youthful innocence, I guess. Or I began to see things I’d once missed. Or ignored. Things that should’ve been obvious, but hadn’t been. This could be the ways my mother and grandmother were full of shit. (So it seemed then.) Or that my school did little to foster independent thought. (This still seems true.) Or that my beloved Howard Phillips Lovecraft was one hell of a racist.

At sixteen the stories I’d once breezed through practically curb-stomped me with their prejudices. In “Herbert West, Reanimator” the titular character comes across the body of a dead boxer, a black man named Buck Robinson. (Even that name!) Here’s the description of the corpse: “He was a loathsome, gorilla-like thing, with abnormally long arms which I could not help calling fore legs, and a face that conjured up thoughts of unspeakable Congo secrets and tom-tom poundings under an eerie moon. The body must have looked even worse in life—but the world holds many ugly things.”

In “The Rats in the Walls” there’s this: “My eldest cat, ‘Nigger-Man’, was seven years old and had come with me from my home in Bolton, Massachusetts” Lovecraft goes on to mention the cat, by that name, eighteen more times in the story and the story isn’t very long.

Last was one of my favorite of his stories, “The Horror at Red Hook.” Not one of his best, but it special to me because it took place in my city, in its descriptions I found something as familiar as my neighborhood in Queens. But now I deflated as I read this description of Red Hook: “The population is a hopeless tangle and enigma; Syrian, Spanish, Italian, and negro elements impinging upon one another, and fragments of Scandinavian and American belts lying not far distant. It is a babel of sound and filth…”

Here’s the funny thing though. When I think back on why these parts hurt me it wasn’t only the racism. (Don’t get me wrong, it was still partly the racism.) I was offended as a Black man. But I was also offended as a writer. This kind of stuff is bad writing, and not just because of the slurs. It’s bad writing because it shows poor thinking on Lovecraft’s part.

“The Horror at Red Hook” takes place in Brooklyn. The protagonist is an NYPD Detective named Thomas F. Malone. When the story opens Malone is on a long leave from his job because he’s suffered through a traumatic event in the hives of Red Hook. The rest of the narrative tells you what he survived. Malone stumbled onto a great and horrific conspiracy among the “hopeless tangle” of dusky ethnics, all led by a wealthy white man named Robert Suydam. By the end Malone encounter some otherworldly horror in the story’s confusing, hasty ending.

But here’s the problem, Lovecraft admits, right in the text, that he doesn’t understand the “Syrian, Spanish, Italian and negro elements” of Red Hook. He calls the population an “enigma.” Despite this Lovecraft ascribes them hideous motivations, all filtered through the perspective of Malone, an obvious Lovecraft surrogate. This turns into a bad feedback loop. Lovecraft doesn’t understand these people, but writes a character who investigates the very people the author admits he doesn’t understand. So who, or what, is Lovecraft really exploring here? Only his perceptions of that place and those people. Writing to corroborate what you already think is the essence of bad writing.

I’m not saying I understood all this, or could articulate it, when I read Lovecraft at sixteen or even as I continued to reread him into my twenties and thirties. My doubts and arguments grew over time. But they didn’t diminish my love for his ideas. They also didn’t minimize the pleasure of the plots.  But as an adult I wanted to find a way to write both a love letter and a critique of H.P. Lovecraft’s fiction.

When I returned to “The Horror at Red Hook” last summer I could finally see a way into the piece, one that would let me have a conversation with Lovecraft, a way to express both my disappointment and admiration. I thought back to that eleven-year old living in a tenement in Queens. I thought of his mother and grandmother and baby sister. His friends from school, the old women who sat along the sidewalk in lawn chairs during the summer, the old men at McDonald’s nursing coffee and conversation. The working folks and the hustlers and the bums.

Where Lovecraft would’ve seen an enigma I could say these were people I knew. They were complicated by not mysterious. What if I reimagined Lovecraft’s old story from their point of view? What if I made one of them the engine of the tale? How much would change if the folks used to playing the background came center stage instead?

I sat at the computer and decided to find out.