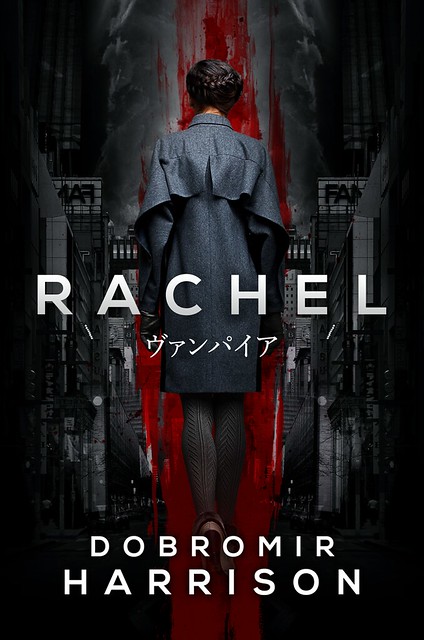 Vampires! Tokyo! Rachel! Dobromir Harrison! Not necessarily in that order!

I had just started writing my first draft of Rachel, but something bothered me:

I was writing a vampire book.

I mean, vampires are dead, right? Neil Gaiman said so, and he knows the publishing world a whole lot better than I do.

I was troubled but, when it came down to it, I had a story about a character I couldn’t stop thinking about.

For the most part, Rachel herself kept me going. She was so full of (un)life I had to keep writing just to see what new torments I could put her through.

But the story needed something else to make it leap off the page and feel real.

Rachel actually came into being in Thailand. I lived there for a while and just happened to drive past a karaoke bar called Sweet Vampires. The name made me laugh (it didn’t look in any way dark or gothic) and got me thinking about this woman who was a monster, and she lived in Thailand, a foreigner like myself, not quite fitting-in but not new to the place. What would she do there? How would she struggle to get by? Did she even speak the language? How would she avoid the sun? What dangers would she face? Who would she prey on?

Well, the idea went on the backburner until I moved to Tokyo. That was where she found her true home, and I actually sat down and started writing her adventures.

On the surface, it was perfect! The world’s largest city, a wealth of history and culture spread out for her to feed from. Neon lights and skyscrapers over a maze of old ramen shops and those little places that sell personal seals for stamping documents. But something was still missing. Rachel had yet to find her place there.

Sometimes, a single image can inspire. I remember going for a walk one night, somewhere on the city outskirts, and seeing a factory with a single light on in one of the upstairs rooms. Tokyo is full of abandoned buildings, and it set my imagination ablaze. I thought of someone living in a place like that. Maybe some kind of monster, creeping among the empty, decrepit buildings on the edge of civilized society.

It was the hook I needed. I started to see the city through her eyes: a place that was, paradoxically, safe to live in, but with enough dark alleys and abandoned buildings where a monster could hide and… well, not thrive, but just about get by.

If vampires were dead, Tokyo certainly wasn’t. But how to sell it to an audience who probably hadn’t been there? I didn’t want it to be a cliché, all samurai swords and Blade Runner aesthetics. It was a city I loved, and I felt the story would benefit from taking place in somewhere lived-in and real.

So I set it in places I knew, where I’d lived. I moved a lot of the action to the suburbs, like Tokorozawa, about forty minutes out of Tokyo by train. Or the little neighborhood of Otsuka, with its small foreign population and love hotels. Or northwest of the city, into the grey expanse of Saitama, places where monsters may really hide – poorer, industrial suburbs that I hoped would be alien, yet accessible to readers. And where would a monster like Rachel spend her time? Someone damaged and violent like her? Lonely, homeless and restless.

Getting excited about the setting helped the story flow, so then I turned to Rachel’s life in Japan. Like myself, she was an outsider, someone to explain things to the reader, but she wasn’t clueless. Early drafts were distinguished by her misunderstanding things, and asking for words to be explained, until I realized she would probably speak Japanese perfectly well after living there for a hundred years. That changed a lot of what I wrote, and also led to one of my favorite parts, when a Japanese woman starts teaching her the language back in the Meiji Era.

I had the character and setting, and the story was starting to take shape, but I struggled with how to explain things to someone who wasn’t familiar with the language or culture. Some of it was straightforward, like changing “Heiwa Dori” to “Heiwa Street”, though I left the street name itself untranslated (“heiwa” means “peace”, so it’s literally “Peace Street”, also where I used to live!) I left words like “geta” (traditional wooden shoes) just as they are, as I felt they added flavor and the writing makes it clear they’re a type of footwear. And a “love hotel” is pretty self-explanatory, right?

One of the biggest issues came during editing, when I realized people wouldn’t necessarily know how to pronounce the name of Rachel’s girlfriend, Yoshie. Someone unfamiliar with Japanese syllables might say “Yo-shee”, whereas it’s actually “Yo-shee-ay” and “Yoshi” is a nickname she uses. Going back and forth between “Yoshie” and “Yoshi” just looked like I was making typos, so I just kept it as Yoshi for the most part, hoping no one would think of the little green dinosaur from Mario (not the best imagery for a gritty horror novel).

It was a delicate balancing-act, spicing the text with enough flavor, and writing from the perspective of someone experienced and slightly jaded with living in Japan, but also bringing readers in with the sights and sounds and smells of a different culture. In the end, I feel it worked well and made the perfect backdrop to a story of alienation and revenge. The city as “safe haven and prison”, as the talented Lillian Cohen-Moore wrote for the back cover copy.