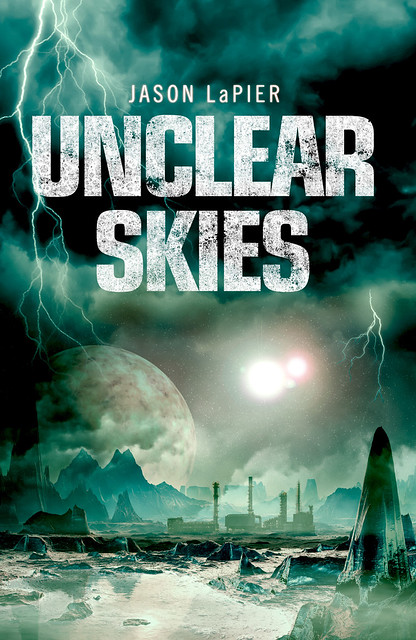 What’s the Big Idea for Jason LaPier and his novel Unclear Skies? It’s simple: Heroes! Who maybe aren’t so much heroes. At least, not at first.

In science fiction and fantasy, we often encounter a character who is somehow special, whether imbued with some extraordinary trait, endowed with a remarkable skill, or just plain abnormal. They may start off as a commoner, but over the course of the story their talents or gifts are unlocked. Sometimes they are portrayed as a “chosen one”, and sometimes they’re forced to become a leader by the nature of their advantages. While I love a lot of these stories, in my series “The Dome Trilogy”, I was looking for much less heroic heroes. I was looking to take an average person, an “everyman”, and drag them through the excursion of what is more or less a hero cycle without the advantages that a hero has.

While I absolutely appreciate speculative fiction with a message, I cannot deny that the entertainment value of SF/F largely lies in escapism. We read and watch to experience worlds, events, technologies, and people other than what we know in real life, other than what is possible in real life, to give ourselves a break from the day-to-day, and to allow us the fun of wallowing in full-blown imagination.

And yet, even if the fiction is an escape from real life, we find immersion so much easier if the characters are relatable in some way. In Young Adult fiction, the protagonist is often an odd kid, someone who feels like they don’t fit in, and then eventually discovers they have a special power or talent. Younger readers know what it’s like not to fit in, because every kid feels that way at some point; a search for identity is part of the process of growing up. And adult readers remember what that was like as well, which is why so many can enjoy YA as much as their own children do.

The challenge with making an adult character develop into a hero is that they’ve already grown past that age of discovery and identity establishment. Sure, one can always learn new skills, but it doesn’t feel the same as the bloom of a gift during puberty. It’s a lot more practice, with incremental improvements. It’s work. And yet, adults in the real world still go through identity crises just as much as teens. So when a story is able to take an adult who seems lost in their life and make them into a hero, even a Chosen One, it resonates.

Take Neo from the film, The Matrix, for example. At the start of the story, he is merely Thomas Anderson, a corporate programmer, a drone. Outside of the office he’s a loner, scouring the net for some hidden meaning to his life that he can feel but can’t put his finger on. When he’s rescued, he’s reborn. His whole world changes, and he has the power – and the calling – to save it. It’s a textbook hero’s journey.

Now let’s take a look at a classic anti-hero: Arthur Dent, from The Hitchhiker’s Guide to the Galaxy. Arthur is also a directionless, middle-aged adult. His reality is suddenly expanded by a thousandfold when he discovers his friend is an alien and they escape Earth’s destruction by hitching a ride aboard a spaceship. But Arthur never unlocks special powers. He never saves anyone or anything. He bumbles through a series of adventures wearing a bathrobe (the only clothing he owns), somehow managing to stay alive. His most remarkable trait is his unremarkableness.

In “The Dome Trilogy”, I wanted a couple of characters in between. “Jax” Jackson lives most of his life in a sterilized exoplanetary colony. He’s a drone like everyone he knows, a detached, late-20s adult. He has the aptitude to be better than he is, but not the drive. Like Arthur Dent, Jax has his world turned upside-down by events that are far beyond his control, practically beyond his scope of reality. In the first book of the series, Unexpected Rain, an entire block of dome inhabitants suffocates while Jax is on duty as a life support operator – a mindless, push-button job – and he is charged with their murders.

From there, Jax has to awaken the intellect that had been shelved – not locked away, not latent, not even undiscovered, but simply abandoned due to apathy. He’s paired up with the one cop who believes he may be innocent, Officer Stanford Runstom. By contrast, Runstom is driven, both by personal ambition and a sense of justice. He’s a wannabe hero who has been held back by the system and his heritage.

In the newly released second novel of the trilogy, Unclear Skies, this trend continues for these two characters. Jax is still on the run, eking out a living by finding odd jobs on a remote independent moon. Here the things that he finds run-of-the-mill – what would be outdated technology back in the domes – is remarkable to a population that is behind the times. His mundane skills at troubleshooting are mythical in this environment, and in fact could be life-saving.

Meanwhile Stanford Runstom, the officer that dreamt of becoming a detective, is “promoted” to a public relations post. Somewhat condescendingly, his new department praises his simple honesty, hoping to impress clients with a straight-talker. And yet even while working for the marketing department, Runstom can’t help but fall back on his detective aspirations when trouble arises.

My hope is that between these two characters, there is something of non-sci-fi life that readers can relate to. I personally remember what it’s like to be lost in my 20s like Jax, feeling as though I should have discovered my purpose by then, but still just trudging through each day. And likewise, to discover a passion for something as Runstom has, to put everything into it, only to see it diverted time and time again. These are the trials of adult life in the 21st century, extrapolated into the 27th century, with some murder thrown in for thrills and interstellar travel thrown in for escapism value.