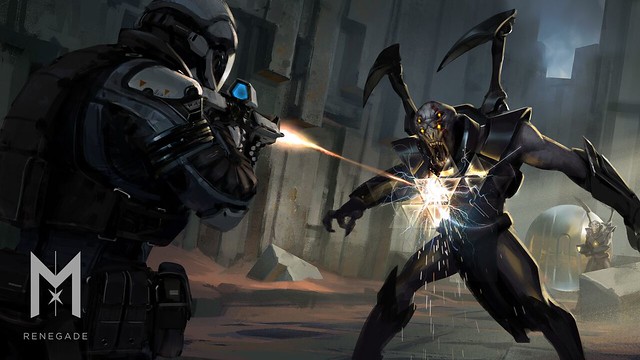 So here is today’s super-cool news I get to share with you: a new video game I’m involved with is on its way! It’s Midnight Star: Renegade, a sequel to Midnight Star, last year’s mobile-based shooter from the fine folks at Industrial Toys. It’s a ton of fun.

Here’s a bit from the press release that was just sent out about it:

Industrial Toys, the team behind last year’s ground-breaking Midnight Star, today announces a brand new shooter for mobile, Midnight Star: Renegade. Set 120 years in the future after the events of the first Midnight Star game, Renegade puts players at the center of a mystery left behind by a space-faring civilization that went missing 22,000 years ago.

The new game builds upon the innovative touch controls of Midnight Star and introduces all-new features like free movement, jump boots and guided rockets. Fans of the 1st game will find amped up action and tons of new features, but the biggest change for the franchise is how Renegade fits into the mobile gamer’s lifestyle. Levels are short but plentiful – 150 in the first campaign installment and most are under a minute in length. A multiplayer mode offers quick head-to-head battles for rank. And improved touch controls make an airborne circle strafe second nature.

Players also get to build their own characters, craft their own weapons and design their own armor and look. Prefer to snipe from long range? No problem. Rather jump headlong into the fray, dual wielding rocket pistols? Then jump!

Midnight Star: Renegade is entering soft launch this month and should be available everywhere on the App Store and Android this Summer.

I’ve played it (I mean, obviously), and it presses all my gamer buttons: It’s fun and fast and full of action, and it really is perfect for the “I’ve got a minute while I’m standing in this line” situations we all get into during daily life. I think you’re going to enjoy the hell out of it.

Again, if you want more detail, click over to renegadeprogram.com and catch up on all the coolness. It’s coming, as noted, a bit later in the year.