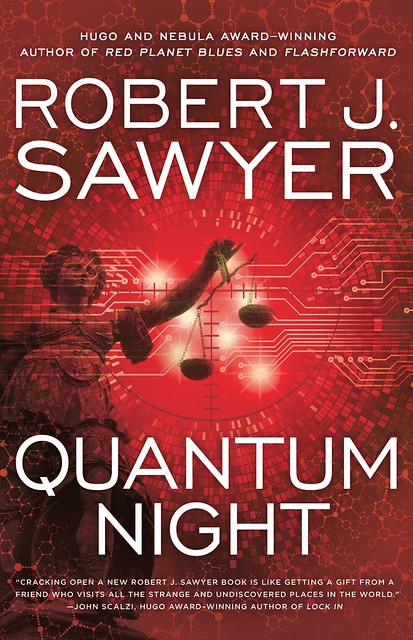 Robert J. Sawyer is one of the most prolific and celebrated modern authors of science fiction (with Hugo, Nebula and Campbell awards among others to his name), but recently Sawyer took some time between books. It was not time idly spent, as Sawyer relates in this Big Idea: It laid much of the groundwork for his newest novel, Quantum Night.

I wrote the first paragraph of Quantum Night on September 11, 2012—and the next day, my younger brother Alan got in touch to say he was dying of lung cancer.

I finished my work on the novel, returning the marked-up page proofs to the publisher, on November 30, 2015. My 90-year-old mother, then already in intensive care, died a week later.

There are three years between the beginning and end dates. With a two-decade track record of writing a book a year, that struck me (and my accountant!) as crazy. But my brother’s illness and death took a lot out of me, and for most of 2013, I wasn’t up for doing anything other than just reading.

And read I did, working slowly but surely toward the core idea for Quantum Night. I started with an absolutely riveting book called Evil: Inside Human Violence and Cruelty. Its author, Roy F. Baumeister, tries to make psychological and evolutionary sense of our basest instincts.

Next, I tackled Hitler’s Charisma: Leading Millions into the Abyss by Laurence Rees. With all due respect to the corollaries to Godwin’s law, it seemed to me that the Hitlerian template was horribly commonplace: a handful of psychopathic manipulators whipping up mindless followers.

And perhaps, it occurred to me, they were literally mindless: exemplars of the entities proposed in Australian philosopher David Chalmers’s thought experiment about beings externally indistinguishable from you or me but with no inner life, creatures he termed “philosopher’s zombies.”

I’ve long been familiar with the work of Oxford physicist Sir Roger Penrose and his collaborator Stuart Hameroff, which asserts that consciousness arises from electrons in quantum superposition in little doodads called tubulin dimers within neurons (see, for instance, Penrose’s classic Shadows of the Mind: A Search for the Missing Science of Consciousness).

Mashing up my reading about the nature of evil with Penrose and Hameroff’s theory led me to the central conceit of my novel, namely that human consciousness comes in three successively more complex varieties, based on the number of electrons that are in quantum superposition in each tubulin dimer.

If one electron is in superposition, I say the person is a philosopher’s zombie—the lights are on, but nobody is home.

If two electrons are in superposition, there is indeed self-awareness and an inner life, but such individuals literally think only about themselves; they have no empathy and are therefore psychopaths (callous manipulators, although not necessarily violent).

And if three electrons are in superposition, then there is a reflection upon the inner life—not just consciousness but conscience.

My novel proposes that each cohort is half the size of the one before: the majority of humans are philosopher’s zombies; a large minority are psychopaths, and only a precious few are empathetic beings.

Of course, all my speculation is wrapped up in a very human story about a man who has transitioned through all three quantum states during a difficult life and is now trying to come to terms with the things he did while devoid of conscience.

While pulling all this together, I consulted with some of the world’s leading thinkers on the science of consciousness (including Hameroff and Chalmers), psychopathy (including Kevin Dutton, author of The Wisdom of Psychopaths), and quantum physics (including John Gribbin, the author of In Search of Schrödinger’s Cat). My hat is off to them, and all the others who helped me on this journey.

My late mother always said, “If you can’t say something nice, don’t say anything at all.” Ultimately, despite its exploration of why evil exists, my novel does say something nice about the human condition; in the end, Quantum Night is an optimistic book. After all, it’s always darkest before the dawn.