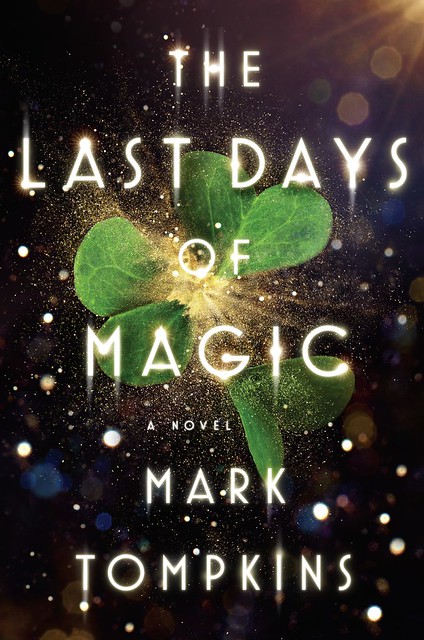 In The Last Days of Magic, author Mark Tompkins has a novel way of looking at the legends, myths and fairy tales many of us grew up with – a way that changes what they mean for the world into which he writes a few new tales of his own.

Legends, myths, faery tales, some so old their origins are impossible to discern, others date back just a few centuries. We have all heard and read our share. We have our favorites. But what if they were true? This is the big idea behind The Last Days of Magic – what if those mythic tales were true and coexisted with our accepted history, and the world of today?

It all began with a single irresistible character and her small legend, compact enough to fit in a frame affixed to the wall of an Irish castle. Actually, it was more tower than castle, one with a box out front and a sign that pleaded with me to drop a Euro into the slot before entering. That was the legend of Red Mary, a woman so strong that years later when I finally decided to start a novel, she banged on the inside of my skull and demanded to be a protagonist. OK, Mary, if you are coming out then the darker versions of your legend, the ones with witchcraft, are going to prevail. And I am going to have to create a magical world for you to romp through.

Here I have to acknowledge the author Hannah Tinti, who once told me her mantra: What is the weirdest thing that could happen next?  Before setting pen to paper, I twisted that into a mantra of my own: What if it was true?

All those old Irish tales of faeries, the Sidhe, what if they were true? The ancient stories depicted the faeries as tall, powerful, and dangerous, none of this Tinkerbell stuff. They could not procreate with humans if they were dragonfly-sized! What if St. Patrick actually enchanted a bell so that its ring was lethal? Researching legends in Ireland, I stood looking at that bell – fittingly labeled Clogh-na-fullah, Bell of the Blood – at his museum in Armagh and wondered what that implied about him, his followers, and the age in which they lived. There were also anecdotes linking the Sidhe to the offspring of randy angels who had snuck out of heaven to seduce daughters of Eve. If those were true, would Lilith, rumored to be Adam’s first wife, be involved?

Soon, rather than inventing a world, I found myself assembling one out of old stories. Like a giant jigsaw puzzle, I fit together the pieces, not only faded legends, biblical myths, and faery tales, but also those that I found in history books. As the puzzle came together, a new world was revealed, both magical and historical.

Then, like a somewhat demented deity going through the stages of creation, I started to populate this world with other magical elements from existing lore (I admit to a preference for the darker ones). Witches and their feats were drawn as much as possible from records of witch trials, after all in this world those were also true. Whenever a demon was called for, I plucked one out of the Dictionary of Deities and Demons in the Bible, my favorite thousand-page “nonfiction” reference. For magical books, the only option was to use “real” ones, like The Sworn Book of Honorius, later used by John Dee, magician to Queen Elizabeth I, and the Book of Raziel, used by the twelfth century Jewish mystics Chassidei Ashkenaz.

One of the great joys of this process was when unexpected links spontaneously manifested. For example, I was researching an Italian mercenary, only to discover he was an English lord using an assumed name. A little more digging revealed that his secret handler was reputed to be Geoffrey Chaucer. Which then tied in beautifully with the magic Chaucer included in his tales.

But a problem arose with my What if it was true? big idea – namely, how could I reconcile my newly assembled medieval magical world with recent history and the contemporary world in which we reside? That was not a question I could ignore. I had to add a second big idea: If it were true, what happened to it? The closer to modern time the story got, the harder that question became. Recent history felt all but frozen in place, there were just too many records. I tried attacking the problem from various angles until a well-documented modern conspiracy – one to suppress and modify historical documents – presented itself as a way for my story to flow seamlessly into the 21st century.

This was all fun, and I happily burned up months putting it together, but it was not a novel; it was a stage. An expansive stage upon which the primary characters – including Red Mary, renamed Aisling – could struggle, love, question, and try to find their way, some making it, some getting lost, and others dying in the effort. Having a well-built stage, with all its magic and pitfalls, made it possible for me to follow along behind the characters, recording their motivations, feelings, and actions without having to worry about the rules of their world. Ultimately, it was the chronicle of their lives that turned my big idea into a novel, The Last Days of Magic.

The Last Days of Magic: Amazon|Barnes&Noble|Indiebound|Powell’s|Audible