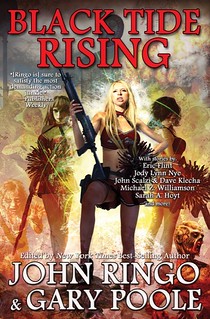 As some of you may remember, I co-authored a short story to go into the Black Tide Rising zombie apocalypse anthology, edited by John Ringo and Gary Poole, which will be out in bookstores on June 7th. But if you just can’t wait that long, you should know that Baen Books, the publisher, is offering the “eARC” for sale right now, which you can download and stuff into your e-reader of choice. In addition to my story, co-written with my friend Dave Klecha, the anthology also features stories by John Ringo, Eric Flint, Sarah Hoyt, Jody Lynn Nye, Michael Z. Williamson and the proverbial “more.”

The story Dave and I wrote is called “On the Wall,” and it features two characters, named “Dave” and “John,” who are standing watch on a compound wall during a zombie apocalypse, talking about life, the universe, and zombies. You know, as you do when you’re standing watch on a wall during a zombie apocalypse. It was fun to write, and nice to have it wanted for this anthology.

Also, it’s my first story involving zombies! And that’s something. Check it out if you like, in eARC or when the anthology is officially published in June.