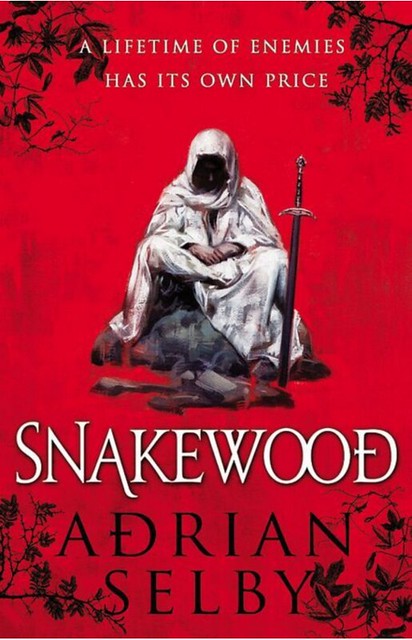 Writers write in the first person all the time, but what does it mean to do so when you’re trying to develop a world? It’s a question that mattered for Adrian Selby for his fantasy novel Snakewood. Today, he explains why.

“My name’s Gant and I’m sorry for my poor writing.”

So begins chapter one of my debut epic fantasy Snakewood.

As I planned out the book I fretted a great deal over how to immerse readers in the lands, cities and lives of the world of Sarun, in which the story is set. I recalled how vividly I daydreamed myself into Middle-earth as a teenager, following paths and roads hinted at in the texts but never walked. Tolkien’s were the first of many books I would admire over the years that followed for their ability to transport me utterly to an unfamiliar, magical place.

These are the books that made me miss my bus stop and left me dazed as I walked into the office, trying to tear my brain away from Thomas Cromwell’s poignant, tender caress of his daughter’s angel wings (Wolf Hall) or the faerie-soaked fields of Edgewood (Little, Big) and back to those essential first steps of a new day – kettle, teabags, email.

So when I started writing Snakewood, I thought, what do I need to do to deliver that level of immersion?

Of course, I needed to build a vivid world, and a magic system that integrated with that world, defined it and its many cultures. The wider reality of life being lived needed to crowd the edges of the story, but no further. I wanted also, like every writer, to make it so that the reader feels the scuff of boot, the scratch of stubble or the smell of a mortal wound.

The obvious answer to the latter was to go first person; put the reader behind the characters’ eyes, seeing what they see. There’s a marvelous directness to first person – a mainline into their feelings and thoughts – bringing the reader down from the sky of the omniscient narrator into the streets and fields.

But it was after reading James Joyce, Irvine Welsh, and especially Peter Carey’s True History Of The Kelly Gang that I realized the subliminal tension present in any first person narrative: the author is, necessarily, speaking for the character. It’s pure ventriloquism. No character’s internal monologue picks out the world and the speech of others so as to create just this story, using just these details, to engross, challenge and entertain. The authors I mentioned above, like so many others, have experimented with that act of ventriloquism – Joyce with stream of consciousness in Ulysses, Welsh with the strong, literal vernacular of Trainspotting. Carey played with the words and grammar so as to make it seem as though he wasn’t there at all, that this was Ned Kelly’s own hand. To wit:

“… a man might be a bank clerk or an overseer he might never have been lagged for nothing but still he knew in his heart what it were to be forced to wear the white hood in prison he knew what it were to be lashed for looking a warder in the eye and even a posh fellow like the Moth had breathed that air so the knowledge of unfairness were deep in his bone and marrow.”

More than ever before or since, I felt as though the author had disappeared. Ned Kelly was speaking, unable to express his feelings eloquently or write them down properly. The lack of eloquence was perfect, and at one point in the book, hugely moving. I loved it.

If Snakewood is a ‘found footage’ collection of narratives to be written ‘in their own words’, then Gant, as a poorly educated mercenary soldier, should struggle to express himself too. Gant’s narrative is central to the novel, for he is its emotional anchor, its principal ‘good guy’ and the great joy and challenge of writing it.

Every writer should be terrified of what they’re about to do when they start a book. I was terrified at the thought of writing a limited third person narrative with consistent, but not perfectly consistent, grammatical flaws on top of all the other things I needed to get right. It was the most challenging part of my attempt to disappear as an author; hoping that Gant, and the other narrators, would come through more purely. I wanted the characters of Snakewood to immerse you in their story and their world. Not mine.