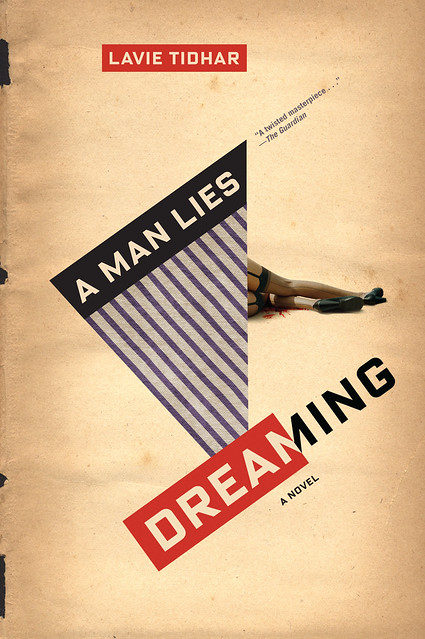 World Fantasy Award-winning author Lavie Tidar came up with a awful, terrible, no-good idea for a novel — and then wrote it anyway, resulting in A Man Lies Dreaming, which then went on to garner starred reviews in the trades, award nominations and wins, and the sort of glowing praise writers dream of. What’s this awful, terrible, no-good idea, and why did Tidhar decide to write it anyway? The answers await you below.

The idea is simple: what if a disgraced Adolf Hitler was working as a lowly private eye in 1939’s London?

But I should backtrack.

Ideas are easy. Bad ideas are easier still. And as far as ideas go, this must be one of the worst. This was certainly the reaction of my agent, when I mentioned it to him – a slightly shocked expression followed by genuine laughter. That’s the thing I like about my agent – he gets it, even when it sounds (as my work often does to him) ridiculous.

Around 2011, I was living back in London. It was a cold winter. My novel Osama, which had been rejected by more publishers than I could count, was finally coming out from a small publisher in the UK. My Bookman Histories trilogy was finished and delivered, and I was out of contract, out of cash, and I didn’t have a coat. A lot of this, I suspect, would feed into the book later. . .

I was figuring out what to write next. At the time, I was trying to work on a difficult book which would eventually become The Violent Century. It was an act of faith, since no one was lining up to buy it, but it felt worthwhile, and so I struggled on. I don’t actually know why some books are so hard to write, while others feel natural, easy. But I remember the moment when A Man Lies Dreaming came. It was around one o’clock at night. I was reading one of Philip Kerr’s Bernie Gunther novels. They’re excellent crime thrillers about a private detective in Nazi Germany, sometimes difficult to read but generally brilliant. In the novel (I forget which one), Kerr makes a throwaway mention to the idea that Adolf Hitler could have himself become a private eye. A light pinged in my head.

It was the very ridiculousness of the idea that I liked. It was the sort of idea that is so offensive, so tasteless, that I would be terribly offended if anyone ever did it…

Which is why it appealed to me, I think. I thought, if anyone might actually get away with something like this, it could be me. I don’t mean this in a hubristic sense. But the Holocaust features large in my life. My family died in Auschwitz. My mother was born in a refugee camp in Germany, after the war. If anyone could do this – and I didn’t know if I could! – then it just might be me.

I remember being very excited about it. Then I tried to forget all about it.

Of course I didn’t want to write it. It was a ridiculous idea, an unsellable idea, and moreover it would require me to walk down a pretty dark path to reach it. So I put it away.

I worked on The Violent Century. In the meantime, to my surprise, Osama had picked up a few award nominations. It ended up winning a World Fantasy Award a year later, just a week after I’d finally finished the manuscript of The Violent Century – which quickly sold to Hodder & Stoughton in the UK.

All of this was pretty unexpected.

I tried not to work on “the Hitler book”. Occasionally the subject would come up, and people would laugh, and shake their heads. I tried to work on the next novel, but nothing worked. Meanwhile, on the sly, I was acquiring books. Hitler’s childhood. Hitler and women. Mein Kampf (my God, is there a book more unreadable than Mein Kampf?). Then the manga version of Mein Kampf. . . Hitler became a constant presence – Hitler the abused child, Hitler the starving artist in Vienna, living in an attic with his friend Gustl, Hitler the young soldier suffering post-traumatic stress disorder. . . Hitler, in fact, before he became Hitler.

Hitler was not a monster. None of us are. He was a person who had become monstrous by his actions, and I felt it was imperative for me to understand Hitler, to get into his head.

Let me say this: it’s not a particularly pleasant way of spending a year of your life, living with Adolf Hitler.

I didn’t want to write the book, but nothing else was working, and Hitler was everywhere, staring at me from the shadows, a fedora over his head: a bitter, unknown, raging Hitler, a man who history had passed by, a loser now eking a meagre living on the mean streets of London.

It was late one night. The entire first draft was written at night, between midnight and 3am, very quickly and intensely. I remember that night, sitting at the computer, itching to get rid of him. I thought, I’ll only write the first line. It’s been stuck in my head for a long time, so long that it’s become a mantra. It was a line in Raymond Chandler’s The Big Sleep, in fact, whose casual anti-Semitism had arrested me for years.

No one would have to know, I figured. I’d just write it and then… move on.

So I wrote: She had the face of an intelligent Jewess.

And I couldn’t stop.

It’s been bottled up for so long that it all came out. My hero, “Wolf”, sitting in his office above the Jew baker’s shop. Outside the prostitutes are gathering in Berwick Street. The night is full of eyes, watching. And a glamorous Jewish woman, Isabella Rubinstein, comes waltzing into Wolf’s office with the offer of a job, to find her missing sister…

I couldn’t stop. I’m not sure I spoke to anyone much during this time. Hitler’s picture stared at me from the desk. The story unfolded, a dark comedy, a detective noir novel, an alternate history… take your pick. And all this while, grounding this lurid tale of shund, or pulp, was its possible narrator – Shomer, a Jewish pulp writer trapped in Auschwitz, the dreaming man of the title – a man seeking an impossible escape.

A Man Lies Dreaming, it seems to me, is several things. It is an argument about escape, about the power or futility of fantasy. It’s an argument began in Osama, continued in The Violent Century, and concluded here. Is escape possible – for any of us?

It is also, I think, a dark comedy. Humour underlines the horror, and humour has been an important part of survival, even during the worst times of the Holocaust. I loved writing Wolf – his impotent rage, his increasing hysteria, his endless rants. There is nothing funnier, after all, than a Hitler without power. “Do you not know who I am?” Wolf rages, at some point – and of course, by then, no one does.

At the same time, A Man Lies Dreaming is grounded in the contemporary. It is written at a time when Europe’s anti-immigrant rhetoric terrifyingly echoes the 1930s. Wolf’s London does not welcome immigrants, and Oswald Mosley’s Blackshirts are marching in the streets, chanting slogans that eerily echo today’s. . .

. . . in the event, I did manage to get A Man Lies Dreaming published. It wasn’t particularly easy, but my editor at Hodder was incredibly supportive, and the book came out in late 2014, was nominated for a British Fantasy Award, and won me my first literary fiction prize, the £5k Jerwood Fiction Uncovered. It’s just come out in Italy, where they seem to like it. . . and it’s out now in the US from Melville House. The bad joke that was “Hitler: P.I.” had turned into the book I am most proud of having written – even if it’s damaged me in the process.