Next week is the only one in the reasonably near future where I know I’m going to be home all week long and I won’t have a deadline of some sort looming over my head, so — hey! Let’s do another Reader Request Week!

For those of you just catching up, Reader Request Week is something I do annually, where you suggest topics for me to write about, and I pick from the requests. What topics can you request? Well, anything: politics, social stuff, personal questions, silly things, things you wish I’d talk about but never do, and so on. Whatever topic you want to request, go ahead and request it. I’ll sort through the requests and start posting my responses, starting Monday, March 21.

While any topic is up for request, I do have a couple of suggestions for you, when you’re making your topic selections.

1. Quality, not quantity. Don’t just splotz out a list of very general topics you think I should cover; I’ll likely ignore it. I’m much more likely to respond to a request that is thought-out, specific and requests something interesting. Give it some thought, is what I’m saying.

2. Writing questions are given a lower priority. Because I write about writing all the time, don’t I? That said, if you ask a really interesting question or make a particularly intriguing request involving writing, I will consider it. Just know the bar is higher here.

3. Don’t request topics I’ve recently written about. I’ve included the last five years of Reader Request topics below so you can see which ones are probably not going to be answered again. That said, if you want to ask a follow-up to any of the topics below, that’s perfectly acceptable as a topic. Also, for those of you wondering how to make a request, each of the posts features the request in it, so you can see what’s worked before.

How do you submit requests? The simplest way to do it (and the way I prefer, incidentally) is to put them in the comment thread attached to this entry. But if you have a reason not to want to have your request out in public, the other option is to send me e-mail (put “Reader Request Week” in the subject head so I don’t have to hunt for it).

Please don’t send requests via Twitter/Facebook/Google+, since I don’t always see those. I credit those whose topics I write on, but feel free to use a pseudonym if you’re asking something you’d prefer not to have attached to your real name.

I really enjoy Reader Request Week, because it often lets me write about things that I wouldn’t think to write about — it stretches my mind, which is fun for me, and hopefully leads to interesting posts for you too. So, please: Make a request! Let me know what you want to know about, here, from me.

And now, the topics from the last five Reader Request Weeks (you can click through to see the actual posts):

So: What do you want to know this time around? 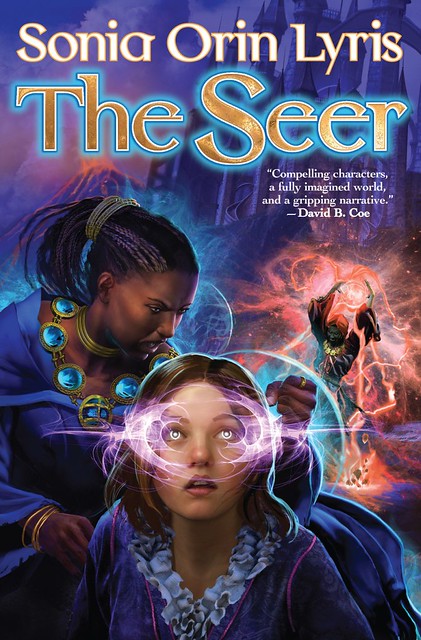 If you think about it, there are practical issues to seeing the future. This fact was not lost on Sonia Orin Lyris, and in today’s Big Idea, she delves into some of those issues and what they mean for the characters in her novel The Seer.

In the opening scene of The Seer, I attempted to transcend one of my favorite cliches: in the darkest hours of the night, in a blustering storm, comes an urgent pounding on a weather-beaten door.

I wanted to start by addressing something that has been nagging at me for years: high fantasy’s tendency to not include women and babies and young children. Do we think them too fragile and vulnerable to be a part of the main action? Is that the problem?

Hmm, I thought. We’ll see about that.

Inside the shack is a mother, an infant child, and a young girl. The man at the door has wealth and power and weapons. He wants answers.

When I pick up a book, I want to travel somewhere. I want to sink into the author’s world and see through the eyes of the people who live there. As an author, it is my job to make that journey come alive. For myself and for my reader. So I make it as real as I can.

In our real world, women have sex, get pregnant, and have babies. Food must be procured. Diapers must be changed. When they choose, the powerful — unless restrained — take advantage of the weak.

Let’s go there, I thought.

I discovered that the young girl inside the shack, named Amarta, sees into the future. I looked around the wretched, poor hovel in which they lived, and I had all kinds of questions.

If she can see the future, why isn’t she rich? What does her family think of her? How does it feel to glimpse what will come?

I wrote The Seer to find out.

It was quickly clear to me that, given how useful a genuine seer would be to those in power, one of the major challenges Amarta would face would be pursuit and capture. I was intrigued by all the ways that might play out.

To make the story plausible, Amarta’s ability had to make sense in all the circumstances in which she found herself. Her ability would have to change as she changed, to mature as she did. Not only the content of what she was foreseeing, but how she understood herself in the context of her culture, family, and purpose.

So many questions arose for me. How does her foresight work? Does knowing the future change it? What can she do with this ability?

Can it be stopped?

Then I slammed into the hardest problem that a precognitive character brings to a story: if she can see into the future, what kind of story conflict is realistically possible? That is, why wouldn’t she simply foresee the problems and avoid them, like any sensible precognitive person?

That was when I started muttering, “What have I gotten myself into?”

There were more challenges yet. I came to realize I had stepped into a very large pile of metaphysics; if someone can see the future, this implies significant truths about the nature of reality, truths that ripple out across this created world. The genre doesn’t matter — I could be writing high fantasy or science fiction or mainstream — or poetry — and I would still have to make decisions about causality and determinism, and how information affects the physical. All those decisions expand out into the world, story, and characters.

And again, I found myself staring at the question: why didn’t she just see this coming?

The answer turned out to be both simpler and more complicated than I expected.

I have a passion for creating characters who are smart and insightful. Far smarter than me, if I can manage it, and more capable, too. This meant that any question I had about Amarta’s precognitive ability, someone else in the story would also be having. Similarly, any test or strategy I could devise to understand or track her, someone else would also be devising.

This, it turned out, was part of the answer; everyone concerned with Amarta was asking the same questions I was.

That was when it all started to come together for me, when I realized that the questions themselves were central to the story, and that the story would answer them in its own good time. As those around Amarta came to understand her better, they would react. They would have new questions. They would change. Nothing would be static.

And Amarta was not standing still either.

So, then: why couldn’t she simply avoid the problems that faced her?

Well, sometimes she could. Sometimes not.

She’s not a machine, you see; she has desires and passions, fears and dreams. How does a character with foresight, immersed in the consequences of what happens around her by virtue of her ability to foresee it, figure out what she wants in the first place?

If you can see the future, what choices are left to you?

If you can see the future, do you even want to see it?

In the end, I realized that the questions surrounding Amarta’s choices were universal questions: what do we want, and what are we willing to do to get it?

The answer also lay in an old adage: the map is not the territory. Regardless of what we understand, in our past, our present, or our future, we always understand through the lens of what we want, the way we see ourselves in our world, and the coalescing experiences of our lives. The best map in the world will not prevent us from getting lost, because it is, after all, only a map, and the territory is never its equal.

At one point in the book, someone asks Amarta this: “Are you ever surprised?”

“All the time,” she replies.