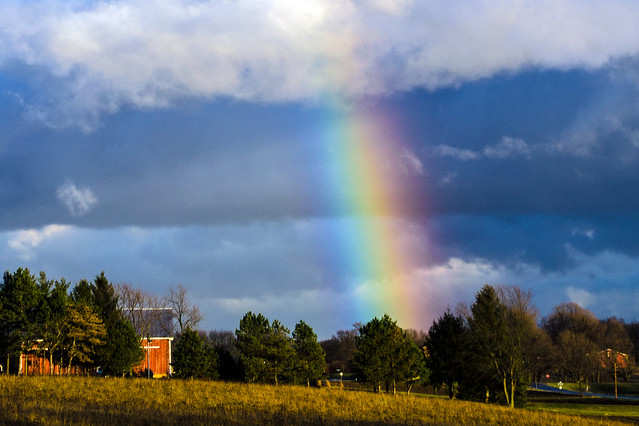 Welcome to Reader Request Week here on Whatever, where you suggest the topics I then write about. And let’s start off with this one, from Kilroy, who asks:

Urban v. Suburban living: Why I live on a big ass property in the middle of nowhere with awful internet when I could be living it up in a nice house in a big city with all the benefits of modern society and be around more people with the same political and social ideals that I do.

I’ve noted several times on Whatever how it is I came to live in Ohio, so there’s no point in going into great detail about it again at the moment (the short version: My wife’s family is from here and she wanted to be closer to them as our daughter grew up). I think the question is really about why I, a generally liberal, cosmopolitan sort of fellow, who has the means to move somewhere more in line with my politics and lifestyle, chooses instead to continue to live in a small, rural, conservative town in a small, rural, conservative county, in the Midwest, which is generally less cosmopolitan (and liberal) than the coasts.

Fair question, and here’s why:

To begin: we’ve paid off my mortgage. We’re not in a rush to get another one. I mean, we could afford a new one, I suppose, in a larger city than this, but why? To have the same home lifestyle experience we have where we live, we would have to spend a truckload of money we no longer have to spend here in order to replicate it. Why would we do that?

Well, possibly, to have a richer cultural and social experience than I do. Okay, sure, but let’s qualify that. I lived in the Washington DC area for several years, which meant that at my fingertips I had a whole range of cultural and social activities — and I took advantage of them and saw concerts and events and went out to eat at restaurants and such. And it was great! But we did those cultural events maybe a couple of times a month at most, and went out with friends maybe once a week. The rest of the time we stayed at home and watched movies or read or played video games or whatever.

Fast forward to today, and you know what? Living where we live, Krissy and I go to cultural events fairly regularly, and go out with friends maybe once or twice a week. The rest of the time we stay at home and watch movies or read or play video games or whatever. Which is to say we are who we are, regardless of whether we live in a large metropolitan area or in rural Ohio.

Bear also in mind what “rural Ohio” means. I live in small town of 1,800 and see Amish clopping down my road in their buggies on a daily basis. But this small town of 1,800 in rural Ohio is 45 minutes from Dayton, 90 minutes from Cincinnati or Columbus and two hours from Indianapolis. If I want to see a musical, or look at art, or go to a concert, or go get Ethiopian food, or any other number of things, it’s pretty doable, and the time commitment to and from is not actually all that much greater than it would be on the subway or the freeway. As I frequently say, I live in the middle of nowhere, but it’s the middle of nowhere, Ohio, as opposed to the middle of nowhere, Nebraska. I can go from nowhere to somewhere pretty fast.

The other thing here is that aside from this, I do travel a frankly enormous amount. In the next two months I’ll be in Los Angeles, Detroit, Chicago and Madison, Wisconsin for sure, and there may be other trips I’ll be taking as well. During each of those trips I will see friends, eat well, and go see (or participate in!) cultural events. Because of my travel commitments, I sometimes see friends who live thousands of miles away more often in a year than I will see some of the people who live in my hometown. It also means that when I do get home from travel, what I want to do is not see anyone other than my family and pets for a while. Which means, in point of fact, that living out in the middle of nowhere is perfect for my mental equilibrium.

Now, Kilroy points out another possible advantage to living elsewhere, which is that there would be more of a chance of people having the same mostly liberal-ish politics as I do, as opposed to living where I do, which is a county that went 72% for Romney in the last presidential election, and chose Trump over Kasich in the recently completed GOP primary, 43% to 40%. Even if I moved down the road to Dayton, I would find people whose politics and social stances are much more congenial to my own.

And maybe I would, but two things here. One, there’s the math question of whether I’m willing to pay tens of thousands of dollars a year in a mortgage (or hundreds of thousands of dollars to buy a house outright) simply for the benefit of voting near people who vote like me. That math doesn’t check out, especially because for things like state-wide and Senate and presidential elections, it doesn’t matter how my county votes, it matters how the people in my state vote overall. It’s true my US Representative and my state reps are likely to be Republicans (they all are at the moment), but, eh. That’s life sometimes.

The other thing is that just because people don’t vote like I do doesn’t make them horrible humans; conversely there are horrible humans I know of who share my politics. My next door neighbor and I pretty much cancel each other out when it comes to who we vote for every single election, and he’s as fine a neighbor as I’ve ever had and I would be hard-pressed to find one better. I’m pretty sure he likes me just fine too.

This should not be a surprising fact of life. A civilized society is one where you can disagree politically with your neighbor — sometimes bitterly — and still feel comfortable feeding his cats while he’s away and being glad he enjoys shoveling the snow off your driveway. Meanwhile I can think of at least a couple of people who vote like me up and down the line who I won’t willingly be in the same room with if I can avoid it. Our politics are not the whole of who we are as a person. It’s been politically advantageous for a while now for some folks to suggest we are only who we vote for, and that you can tell everything about us by who we want as president (or senator, or representative, etc). It’s not true, for most people, anyway.

I like my neighbors; I think most of my neighbors like me. I like the little town I live in; I think my little town likes that I live here. I like looking up at the night sky and seeing the Milky Way. I like that I can open my door and just let my pets out, and that every once a while a neighbor dog will come up to the house and ask if my dog can come out and play. I like it that my neighbor’s chickens walk up and down my yard like they own the place. I like it that if there’s a car in my driveway my neighbors don’t recognize, they’ll text just to make sure we know about it. I like that I can take sunset pictures from my deck that make other people jealous. I like the idea that I’ve been writing science fiction in a town where a traffic jam is three cars behind an Amish buggy.

That said, it’s true the Internet here sucks. I’ve had the same speed Internet for the last ten years. It’s possible that will continue to be the case for the next ten years. Dear CenturyLink: You suck.

(There’s still time to ask questions for 2016’s Reader Request Week — get your requests in here.)