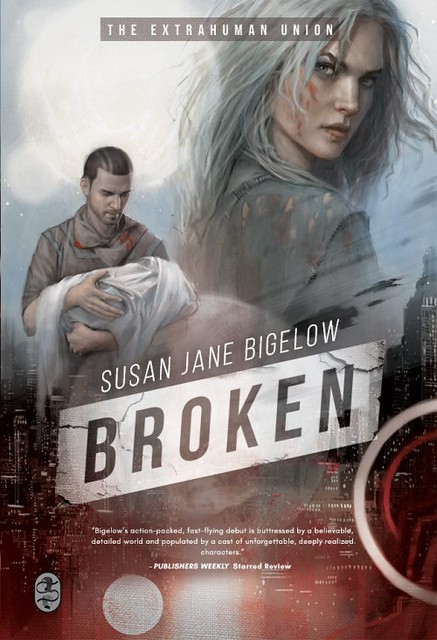 The real world can sometimes get you down. But if you’re a writer, at least, you can use that as an opportunity to imagine another world. At a low point, Susan Jane Bigelow did just that — and her novel Broken was the result. Here she is to tell you about it.

Hope is a fragile thing, especially when times are bad. It’s easy to get lost in cynicism, to dwell on the awfulness of people and governments and systems, and resign ourselves to whatever fate is in store for us. After all, if we don’t get our hopes up, they can’t be dashed… and sometimes, hope feels so far away that it’s hard even to imagine we could ever feel it again.

In 2004, after failing at my job as a high school teacher, getting a new job for a lot less money, and watching what felt like political disaster unfold when John Kerry lost to George W. Bush, I wrote a book about hope to make myself feel better.

That book, Broken, turned into a four-book series. And really, at its heart the Extrahuman Union series is about is trying to find that narrow thread of hope to carry us through the darkest times.

I suppose it is also about superheroes in space. That’s important too.

The world of this book is teetering on the brink of disaster. The grip of a fascist government is tightening around everyone, and there’s nothing anyone can do to stop it. Earth and the dozens of colony worlds that make up the Confederation are falling into a long, long darkness.

Only Michael Forward can see a way through. Michael is just a kid, but he’s been saddled with extrahuman powers that let him see the possible futures of everyone he looks at. He knows how bad things are going to get, but he also knows that there’s a slender path through the darkness that leads to a better future for everyone. All he has to do is find it.

For that, though, he needs the help of Silverwyng, a former member of the Extrahuman Union who started living on the streets of 22nd Century New York after she lost the ability to fly, and who now goes by the name “Broken.” Broken has no hope. Everything she loved about her life is gone, and she is nothing but a mess of fury, despair, and cynicism when Michael finally tracks her down.

Broken is the first chapter of her story, to be continued in the forthcoming books Sky Ranger, The Spark, and Extrahumans.

And yes, I wrote it to make myself feel better about politics. But I also wrote it because one of my fundamental beliefs is that things can and will always get better, no matter how bad it seems now. Fate is cruel and life is hard, but faith in humanity and hope for the future are worth hanging on to.

This is not an easy thing to write. There’s a fine line to walk between hopelessness and corny, and it’s very tempting to swerve to one side or the other. The first draft of this book, which was written for NaNoWriMo 2004, was a lot darker than the final product. There was a lot more death and despair. You’re lucky I cut out the part where Broken eats a dead cat. You’re welcome.

As for why I chose to use super-powered people, well… they’re cool! But they’re also symbols of hope, in a way, especially some of the better ones. Implicit in a lot of superhero narrative is the idea that no matter how bad things may get, the day will always be saved.

I still believe that it will be. And I hope that Broken succeeds in conveying that!