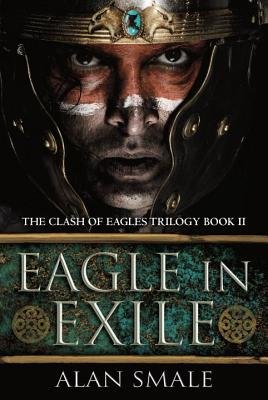 The Roman Empire in the New World? That’s the idea of Sidewise Award winner Alan Smale’s The Clash of Eagles trilogy, of which Eagle in Exile is the second book. But in imagining an alternate history, how does one give honor to actual history, and avoid the easy traps of historical fiction? Smale offers up his thoughts.

I was still a recent import to the U.S. when the hoopla surrounding the Columbus quincentenary started up. My own one-man version of the British Invasion was going rather well at the time; what I’d originally thought would be an educational three-year stint in the New World was being overwritten by the strong urge to stick around. Nearly a quarter century later I’m still here, and I’m now an American myself.

From my outsider perspective it was gratifying to see how quickly the simplistic and myth-based story of Columbus I was used to got replaced with a more factual, thoughtful, and nuanced reconsideration of his voyages and impact. I was just beginning to get published as a writer of short fiction at the time, but even then ideas were swirling around my brain. Yet it took another decade and a half, much more writing experience, plus the unanticipated kick-start of reading Charles Mann’s 1491, for my conscious and unconscious minds to get their acts together.

In Clash of Eagles, the Roman Empire never fell. Now it’s the early thirteenth century and a legion under general Gaius Marcellinus is marching west from the Chesapeake Bay towards the great Mississippian city of Cahokia, a thriving community of some 20,000 people. (Cahokia really existed, of course. The Mississippians were mound-builders, and even today it’s fun to stand on top of what we now call Monks Mound, a giant earthwork 100 feet high and 1000 feet across at the base, look out over the surrounding more gently-mounded landscape, and imagine how glorious Cahokia must have been in its heyday…)

And that was the Big Idea behind Clash of Eagles: Ancient Rome invades North America when the Mississippian Culture is at its height. Subtext: Invoke a different European invasion of the North American continent, in a different way and at a different time but with fairly similar motives – plunder and personal glory – and explore what happens.

Hold up a mirror to the world we know. Attempt a new perspective on the culture clash between invaders who have “discovered” this great new world of Nova Hesperia, and the people who have been living there all along.

Of course, along the way desperate battles, pathos, and hardship ensue.

As the second volume, Eagle in Exile, begins, Gaius Marcellinus is living in a Cahokia that’s suffered considerable death and destruction due to its Mourning War with the Iroqua of the northeast. Marcellinus has done his level best to help his new Cahokian friends, with – let’s put it kindly – mixed results. And then there’s a coup. Marcellinus and a small band of his Cahokian friends are expelled from Cahokia and have to survive as stateless wanderers on the Mississippi. But, but: in the meantime, the Emperor of Rome has hardly forgotten about Nova Hesperia. More legions are coming, and Cahokia is not ready for them. Unless Marcellinus and his new friends can turn things around, they’re hosed. And there may be an enemy even greater than Imperial Rome on the Hesperian horizon.

This kind of story has antecedents. All stories do. The theme of the helpful and notionally more ‘advanced’ outsider entering and influencing a foreign culture has been explored from A Connecticut Yankee in King Arthur’s Court and Lest Darkness Fall to Dances with Wolves and Avatar. Which was kind of the point. I wanted to dig into a new version of the “discovery” of the North American continent. But I also wanted to turn the Avatar cliché on its ear, because I’ve never believed it. I’m generally unsatisfied with protagonists who adapt into new and radically different cultures with such speed and ease that they’re indiscriminately slaying members of their old culture by the end of the book (or movie). Perhaps there are exceptions, and even noble ones, but by and large honorable human beings just don’t behave that way.

Marcellinus is an honorable man. He’s hardly blind to Rome’s flaws, but he will live and die a Roman. He tries to convince himself — sometimes on tenuous grounds — that his actions are in Rome’s interests as well as Cahokia’s.

More crucially, Marcellinus has sworn an oath to never take up arms against Rome. This puts him in a bit of a bind. He is no longer a mere soldier. He has made new friends, new family, a new community and new allegiances, and he can hardly abandon Cahokia and the other North American peoples to their fate when his inside knowledge of Rome might be able to help them.

He can’t fight Rome, and yet he can’t not help Cahokia. Really, what’s a guy supposed to do?

So, the Big Idea of Eagle in Exile: wild adventure in an ancient North America, while in the process standing that comfy Dances with Wolves trope on its ear. With a secondary theme or minor or, hey, side order of: what does an honorable man do in an impossible situation?

With the easy answers ruled out, Marcellinus has to get creative. And after all, it’s not like everyone is just going to do what he says. Cahokia’s chiefs and elders have their own ideas, their own friends and enemies and concerns, and they don’t line up neatly with Marcellinus’s. Marcellinus is quite good at war, but he’ll have to develop a range of other skills to negotiate a treacherous landscape like this. He’ll have to learn fast, think on his feet, and try not to get killed or – given his less than stellar record so far – try not to get anyone else killed either.

I have to say, I’m glad my arrival in North America was calmer than Marcellinus’s. I might not have made it quite as far as I have.