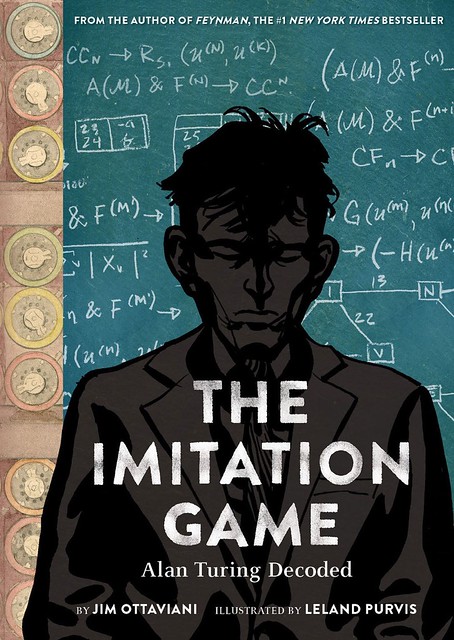 His was one of the first intelligences behind the concept of artificial intelligence, and yet Alan Turing is defined not only by what he said on the topic, but also by what he never got the chance to say. Jim Ottaviani, author of the graphic novel The Imitation Game (Leland Purvis, illustrator), graces this site today to share more.

Elon Musk calls it “our greatest existential threat.” Bill Gates says “I agree with Elon…and don’t understand why some people are not concerned.” And Stephen Hawking, who cosigned a letter about it with Musk, Gates, and others said this in a Reddit AMA: “We should shift the goal of AI from creating pure undirected artificial intelligence to creating beneficial intelligence. It might take decades to figure out how to do this, so let’s start researching this today rather than the night before the first strong AI is switched on.”

What about the guy who came up with the gold standard test for determining whether a machine could think? What would Alan Turing say about AI? Quite a lot, it turns out, almost all of it quotable and said many years before Gates—much less Musk—was born. (For his part, when Turing was writing about this Hawking was an 8 year old climbing out the windows of the new family home in St. Albans to get away from his sisters.)

He said most of it in a 1950 paper called “Computing Machinery and Intelligence,” published in the philosophy journal MIND, back when a philosophical paper might change the way computer scientists think, and might even read stuff that wasn’t in computer science journals. Admittedly, that’s mostly because there were no computer scientists besides Turing, Johnny von Neumann, and a few of their respective protégés, nor were there journals for them.

He said his piece in what storytellers might call his third act. Turing’s first act came in his early twenties, when he successfully tackling the famous “decision problem,” or Entscheidungsproblem posed by David Hilbert. Another mathematician, Alonzo Church, also solved it independently and somewhat traditionally; straight up math, with techniques you’ll remember (probably with no joy) from your high school geometry class.

Turing? He solved it by inventing the modern computer in the abstract, then programming it and running it in his head. Nice work. Enough to make you famous for creating the Universal Turing Machine, a fame that will last until our computer overlords rewrite history to get rid of the human role in their invention.

So what do you do in your thirties, for your second act? How about playing a key role—arguably the key role—in breaking the German Enigma code during World War II, work that saved countless lives and accelerated the Allied defeat of the Nazis. And maybe designing an honest-to-goodness mechanical computer to do it?

The Turing Test for artificial intelligence was the culmination of his third act. If you don’t know what it is—not likely here on John’s blog—it’s…well, sorry. I’ll say no more about that because it’s the lynchpin of our narrative.

We don’t get to know about his fourth act, and that’s the big idea at the heart of our book. Turing was thoroughly modern in so many ways: a mathematical genius, the inventor of modern computers, an expert in encryption, and, as it happens, open about his sexuality in a time when that just wasn’t done. But he died over sixty years ago, his life cut short because a foolish and ignorant society (it’s not completely fair to call it ungrateful, since Turing’s code-breaking work was kept secret until the 1970s, and at that time computers weren’t part of daily life for people like you and me) allowed him to be arrested and convicted for the crime of being gay. Yes, it was a crime in 1950s England, and might as well have been in most other places in the world. The consequences of this were miserable for Turing, and by the time you finish our Imitation Game, I hope you’ll agree that they weren’t good for the rest of us as either.

As I said before, the game itself plays an important role in our graphic novel, so I’m glad Abrams liked our title as much as Leland and I did. And I think Turing would have appreciated it too, to the extent he’d notice. I suspect he would have been proud but perplexed by a biography, and only mildly interested in it. He’d have much rather told you about this new theory he was working on, or a science fiction story he was finishing up, or…

I can’t even imagine what else that might be, but I do know for certain that the world would have benefited—and been much more interesting—if we’d had decades more of him thinking, discovering, and stretching the boundaries of intelligence.