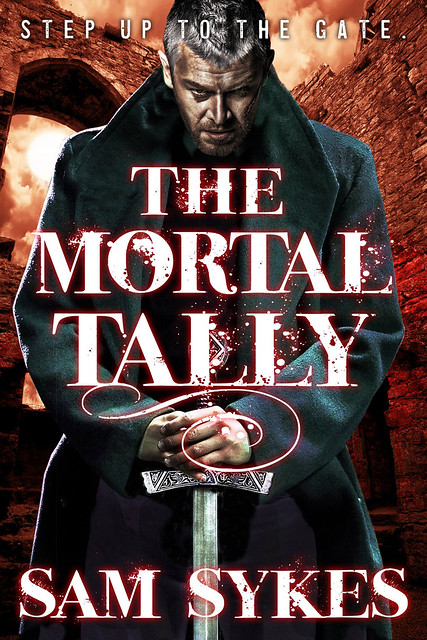 For the record: I don’t own that particular hat. Other than that, everything Sam Sykes says about me in this Big Idea piece for his new novel The Mortal Tally is 100% accurate. Especially the part about the ventilation shafts.

Aside from his immense popularity, staggering wealth and a super-cool hat that says “WORLD’S BEST CROATIAN GRANDDAD,” there’s been only one other thing that John Scalzi has that I really want.

The ability to be recognized as a threat to society.

So, I don’t know if you knew, but I have a new book coming out. It’s called The Mortal Tally, the second book in the Bring Down Heaven trilogy. It’s also my second trilogy I ever wrote, the first one being The Aeons’ Gate. Back when I was first starting out, I pored over every review I got, agonized over every criticism they gave me, ruined my mood for days whenever someone was slightly mean to me on the internet.

Eventually, I learned to ignore it. I learned that whatever people might have to say about my particular work was irrelevant next to the story I wanted to tell. I learned that trying to reconcile different perspectives from different criticisms was a futile effort and that neither were as important as me going forward and pouring all my heart and soul into my next work and that reading reviews would be detrimental to that.

I still hold that reading reviews is a waste of time.

And for a long time, I was very content to take my own advice.

I think it began with Joe Abercrombie, when he linked a negative review where someone actually set his book on fire because he feared that it would infect the world with nihilism. It’s continued through the years with authors who are routinely accredited with far-reaching motives to ruin society via the inclusion of gay characters, progressive plots or the suffusion of too many emotions in their writing.

Few people seem to get as much hate as John Scalzi. I can’t figure out why, since he’s mostly nice except for the times when he goes rummaging around in my ventilation shafts hoarding cheese. But I’ve seen people accuse him of everything from trying to ruin science fiction to actually cannibalizing science fiction authors to trying to destroy marriage.

Now, don’t get me wrong, fellows. I’m not a political guy. I don’t want to get into big arguments, to have my twitter feed filled with people trying to fight me over politics (I made a joke about Chicken McNuggets and Bernie Sanders that haunts me to this day), so I get it will sound a little hypocritical when I say this, but…

I started perusing my own reviews again recently in hopes that someone had come out and proclaimed me to have been the doom of America. I was hoping someone would accuse me either of trying to ruin the moral fiber of the world or of having a shadowy agenda (leftist or rightist, I’m not picky, so long as I can be a bogeyman).

What I got was a few people complaining that I write emotional characters.

Which is kind of hard to deny. Or get mad about.

Though, in a way, it does strike me as kind of subversive to have characters that are overly emotional, angsty or even whiny. In the same way that I’m starting to view a lot of my work as kind of subversive for having slow pacing, not the greatest worldbuilding, and other stuff that we routinely grumble about in fantasy.

I’m not trying to slam on people who like quick pacing, fleshy worldbuilding and grim characters who don’t say a lot. Nor am I trying to suggest that fantasy is plagued with faux machismo and overly emotional characters are seen as an allergen to be purged.

Rather, I’m trying to say that we, somewhere along the line (probably around the time it became cool to accuse each other of trying to destroy things we love), lost our love of subversion.

Not the mechanical subversion that comes from such things as, say, subverting a trope so that dragons all run juice bars instead of hoards. We still love that. But rather, we started seeing subversion of mechanics as the only form of subversion. We support those subversions that occur in places that we are expecting subversion (that is, reimaginings on things we’ve already seen before), but become hesitant in subversions of things we weren’t expecting.

Sex in fantasy is pretty subversive. Not rape, there’s a lot of talk about that. But consensual, emotional, meaningful sex is pretty rare. The emotions that go into it and the way it raises the stakes of a relationship are often met with scoffing. Don’t believe me? Go look for reviews of popular fantasy books and see how many times the phrase “is the sex scene really necessary” comes up.

Mystery in fantasy is pretty subversive. Having things not totally planned out in advance, having things that can’t be explained by a mechanic, having problems that don’t have a clear solution are all met with some consternation from readers. I’ve read enough criticisms of an underdeveloped magic system to know.

And emotions are pretty subversive. We like motivations—the rage at seeing a loved one die, the sense of duty that comes from a long lineage—but emotions give us pause. We don’t like seeing characters who make bad decisions based on their emotions. We don’t like agonizing on emotions like whether our lovers are true or lying or whether we’re actually just lying to ourselves when we say we can do better. We like decisive action and possibly two lines afterward to reflect on the tragedy of it all.

Which is a shame, because The Mortal Tally has all those things and I’m super proud of them.

Now, I’m sure someone out there is gearing up to angrily refute all of this and offer a billion different examples of how it’s done—not you, though, gentle reader, you are precious and cuddly—and I welcome those.

And it might be thinking too highly of myself to be ascribing all these things I’ve done to subversion. It could just be that people don’t like these things at all and I’m putting out a conflict where none exists. It could just be that I like pushing at things and making things obnoxious and like to bust out grandiose explanations for them to explain away my own abrasiveness.

Or perhaps it could be that these things really do bring down societies and that’s why we don’t write about them as much.

In which case, I eagerly look forward to your review.