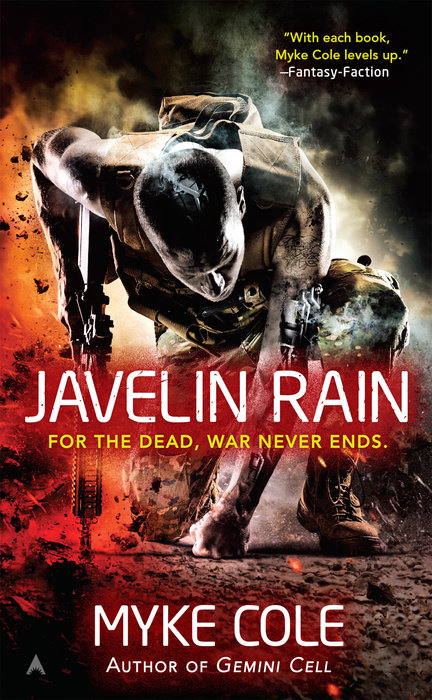 Author Myke Cole is back with Javelin Rain, another admixture of modern military and magic. But writing fantasy doesn’t mean reality can’t come inform or come through in the writing. No, as you’ll read, Cole’s own experiences inform the worlds he’s creating.

This one’s a bit personal, so hang with me.

Human beings are intensely complicated. We’re multifaceted bundles of nerves floating in bioactive soup, lightly salted with electro-chemical signals. The chemical bath and the intricate twists and turns of the human gestation process are beyond complex, and produces individuals as unique and diverse as the snowflakes in a driving blizzard. And that’s before you layer over everything that isn’t driven strictly by biology: culture, experience, society and upbringing.

When you consider how varied humans are, it’s amazing to think that any two of us ever find someone else so aligned, so fundamentally compatible, that we can imagine walking through the rest of our lives together. My best friend once described love as “When your crazy matches someone else’s.” Some search their entire lives and never find their opposite number, the person who matches their particular brand of crazy. When they do, it’s a thing worthy of recognition and celebration. Most societies have just such a custom, we call it a wedding, and while folks are doing it less and less these days, it’s still got a pretty solid grip on the popular imagination.

Marriage is ingrained in our folklore, and when we think of the fairy-tale term “Happily ever after,” a wedding and happy married life is usually the image conjured up.

And sometimes the changes are so drastic, so extreme, that nothing can ever be the same again.

And that’s the big idea behind Javelin Rain.

I lost the love of my life back in 2007 after my second tour in Iraq. It was nobody’s fault. She had signed up to be with an easy-natured, fun-loving sort, the man I was before the suck did its terrible work. Each time I came home, I was a little more serious, a little more vigilant, a little less likely to enjoy going out dancing or talking about nothing with acquaintances in a bar. My goals changed. Buying a house and maybe getting married and redoing the kitchen wouldn’t be enough anymore. I was restless and bored with the old goals, I had become someone with a desperate need to mark the world. Hours spent at a club were hours that could be spent working on a manuscript, or honing my body for service, or consuming media in the same way a prizefighter watches a tape of his upcoming opponent.

She had signed up for a comedy. She got a drama. When she accused me of no longer being the man she fell in love with, I could only nod and agree.

It’s a sad story. I’m long over her and have moved on with my life, but I still remember that sense of chasm, of unbridgeable distance that suddenly stood between us. I was different, and there was nothing to be done but watch the door swing slowly shut as she walked out.

The protagonist of Gemini Cell, James Schweitzer, is killed on an op-gone-wrong and brought back to life to continue serving his country. This new unlife gives him incredible, superhuman power, but even though he can run faster than a cheetah and punch through a cinderblock wall, Schweitzer is still dead, and the people he loves, the people he fought so hard to get back to are alive.

When I did my Big Idea post for Gemini Cell, I straight up owned the PTSD allegory. Schweitzer’s undead status kept him permanently apart from the living. He was among them, but not of them, anymore. The resultant isolation was pretty much the same thing many returning veterans feel.

In Javelin Rain, we see Schweitzer attempt to continue his relationship with his wife and son, to protect and nurture, to grapple with the this sudden shift that has made him different enough to be utterly alien, but similar enough to still kindle the feelings of love and loyalty that were always there. It is a scenario that many who return from war to their loved ones experience, struggling to find a new way forward in a relationship where all the goal posts have suddenly moved.

Will Schweitzer be able to do it? You’ll have to read to find out.

Life doesn’t like neat edges. The things that hurt us also buoy us up. Schweitzer’s heart doesn’t beat. His smile is little more than a rictus grin. He can’t share a meal, or warm a bed, or even share in the rigors of life that draw us closer to one another – aches and pains, aging, the need for sleep. Schweitzer’s new unlife has cost him dearly, that’s certain.

But I think about Schweitzer, about his magically enhanced strength and speed, his ability to hear a pin drop through a closed door, his unwavering core commitment to leaving the world better than he found it and putting these new abilities to serve in that glorious cause.

And so are we all.

Life won’t have it any other way.