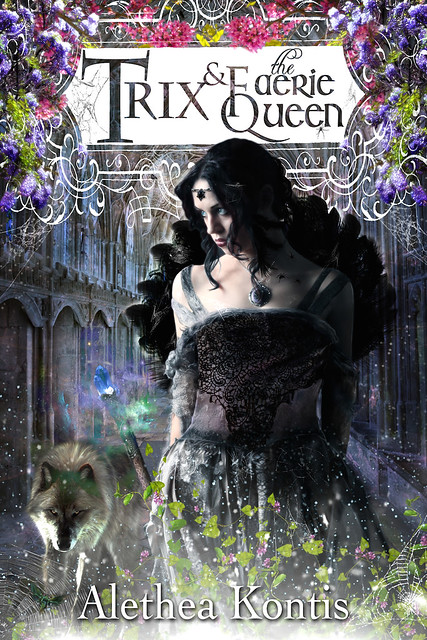 “TEHETHJO” is one heck of an acronym, but Alethea Kontis knows what it means, why it’s important, and how it relates to her new novel Trix and the Faerie Queen.

But we all know that’s a load of crap, right? People say, “Everything happens for a reason” in an attempt to make you feel better about The Exceptionally Horrible Event That Has Just Occurred (TEHETHJO). Like, for instance, when you splatter turmeric all over your vintage white shirt with the handmade Belgian lace, but the red top you’re forced to change into is the one that catches Prince Harry’s eye and WHAMMO. You’re sipping tea and eating eggs with the queen because reasons.

Yeah. Right. No. Things in life just happen—good or bad—and those things become the reasons for whatever happens after. It’s plain-old scientific cause and effect. Now, how you decide to act in the aftermath of TEHETHJO is the sort of thing that defines you as a person. There’s fate, and there’s free will.

I am all about forging one’s own destiny.

Maybe it’s because I started out as a child actress, or because I did a lot of improv in high school, but all my TEHETHJOs typically turn out pretty great. I don’t make lemonade, I make limoncello. Unfortunately, knowing that doesn’t automatically turn life into sunshine and baby otters while I’m standing at ground zero during global thermonuclear war.

Like, for instance, when my boyfriend and my publisher dumped me in the same 24 hours a couple years ago. (Small spoiler: Prince Harry doesn’t show up at the end of this, so don’t hold your breath.) You know that thing where a person’s soul metaphorically shatters into a million pieces? That. TEHETHJO. All over the inside of my poor Firefly-class Volvo.

But if TEHETHJO hadn’t occurred, then the book that’s releasing this week would never have existed. NEVER. And it’s the best book I’ve ever written.

Trixter was meant to be a stand-alone novella that told the story of what happened to Trix Woodcutter while his sister Saturday was questing about in Hero, since the publisher had politely asked me to remove his entire subplot. At the same time, it was my tribute to Andrew Lang’s Crimson Fairy Book. It was not meant to be Volume One of The Trix Adventures. That fey scamp of a little brother was not meant to find a companion and traverse continents and chat up all sorts of legendary beasties and save the world. He was not meant to become my fairy tale Doctor Who.

And yet…there I was, writing a scene at the end of Trix and the Faerie Queen that was not in my outline, giggling and weeping over my keyboard at the same time. Because reasons.

If everything really does happen for a reason, the reason Trix and the Faerie Queen exists is me.

And I am so incredibly proud of that.