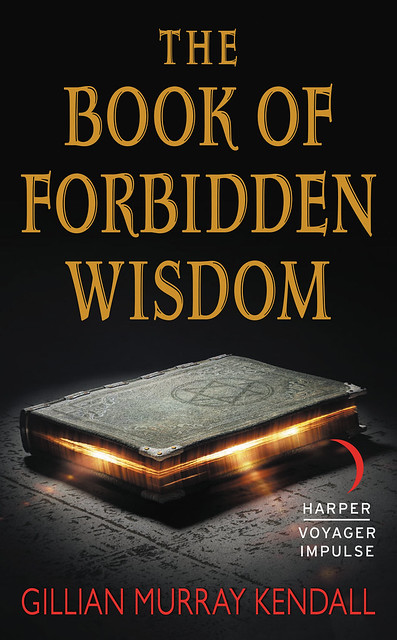 Who dares to broach The Book of Forbidden Wisdom? And who dares to write it? Gillian Murray Kendall, who has done the latter, talks about what that book means and represents in the world she’s created for it.

The evil brother of Lady Angel Montrose interrupts her wedding and threatens her life in order to get information from her about the location of The Book of Forbidden Wisdom.  Lady Angel, her sister, Silky, and her best friend, Trey, flee in the night on their own quest to find The Book, which all believe contains great power and the access to great wealth. On their journey, they are joined by an itinerant Bard—the same one who played at Angel’s ill-fated wedding. Angel, whose marriage was to be one of convenience, finds herself drawn to the dark allure of the Bard—at the same that her friend, Trey, makes it clear he has always loved her.

The Book of Forbidden Wisdom is a tale of wild adventure that explores the nature of good and evil as well as the power of art to transfigure life; it is about a quest for wisdom and power that becomes, too, a quest for love.

Well, no. At the heart of the book lies a big idea: in the land that Angel and her sister, Silky, are forced to flee, the Great Aristocratic Houses are built on the sweat and tears and lives of the casteless and of vagabonds. And when Angel and Silky run from their evil brother, they are leaving behind a crushingly oppressive set of social mores: men and women cannot so much as touch before arranged marriages; the aristocracy and the casteless live in different worlds—one of unimaginable wealth, and one of poverty.

Once on the road with a Bard, however, Angel finds herself questioning everything she has been taught. Bards are landless, almost vagabonds, but traveling with the Bard makes it clear that all of her stereotypes are false. And the time comes when rules have to be broken.

Because Angel drowns. Or so it seems. After she groggily comes to after being submerged in flood waters, she notes that: “This thing is this. If an arrow pierces your heart, or a horse stomps on your head, you’re dead. Sometimes, though, with drowning, a person has a second chance.”

That second chance comes from the Bard—who she realizes is neither vassal nor freeman. Neither caste nor casteless. He saves her.  Even so, Angel’s best friend, Trey, is horrified that, to bring her back to life, the Bard must actually touch Angel. Angel’s sister, Silky, on the other hand, seems to understand that the rules are changing:

“’That man,’ said Silky to Angel, ‘took you to the bank and squished the water right out of you. Trey was going to punch him for touching you, but I wouldn’t let him.’”

Despite the fact of saving Angel, the Bard wants no part of the Great Houses. But circumstances throw the characters together.

Angel is glad that the Bard will accompany them, although at first she sees him as others might, as belonging to “a caste so low it almost didn’t count as a caste, a caste forbidden from marriage to the landed, from carrying weapons, from fraternizing with nobility.” After hearing the bard sing, however, she has to acknowledge that he carries his own kind of power and a kind of magic—that of art, of song, of fiction. Bards, she realizes, are not “below” the Great Houses, but “beyond.” And Angel knows now that it would never be enough to thank the Bard for saving her life by giving him the tokens of the Great: by “paying him off with jewels” or “giving him the freedom of [her] lands.” And as the Bard travels with Angel and Silky and Trey, slowly the differences between the landed and the casteless erode.

The Book of Forbidden Wisdom, after all, opens with a prophetic dream, in which Angel sees “the casteless rise where the Great had been.” And it ends— well, I’m not going to tell you how it ends, except that major plot elements are resolved, while inroads are made into the caste system. And the power of literature lies behind the changes.

The quest, after all, is after a book—The Book of Forbidden Wisdom—which is something not just forbidden but subversive.

Perhaps all books are so.

The firemen of Ray Bradbury’s Fahrenheit 451 would agree.

So would those everywhere who burn and ban books.

Luckily, one can’t burn or ban the ideas in them.

Someone who read The Book of Forbidden Wisdom asked me: “But what’s next?  You make it sound as if there might be some kind of revolution in your next book.”