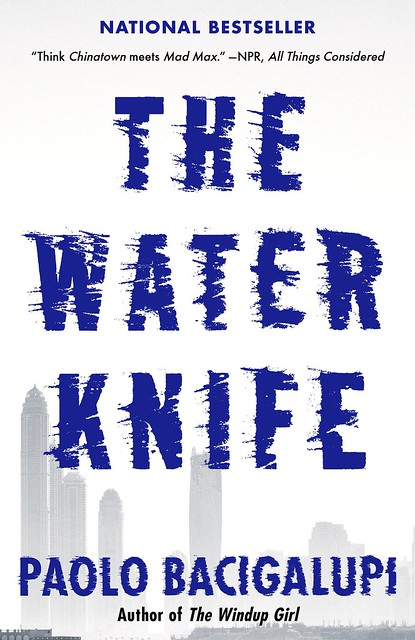 Paolo Bacigalupi has made a career out of imagining the some of the less pleasant futures that are possible given humanity’s current path, written brilliantly enough to keep you turning the pages even as you realize to your horror he might turn out right about these things. The Water Knife, a hardcover bestseller now releasing in paperback, is no exception, and in this Big Idea, Bacigalupi writes about when he was writing the book, the present was influencing the future world he was creating.

(Disclaimer: I liked this book enough to blurb it.)

When I began writing The Water Knife in 2011, the Texas drought was in full swing: record-breaking temperatures, low reservoirs, dying cattle, and a governor who was encouraging people to pray for rain.

As I worked on The Water Knife in 2012, I attended a drought conference in Colorado, my home state. Snowpack in many areas was nearly non-existent. Tourism and agriculture were hurting. Reservoirs were at historic lows. Forest fires were tearing through parts of the state, and those places that burned then turned into mudslide zones when rains finally did come. And at the drought conference, no one could utter the words “climate change.”

By the time The Water Knife was published in 2015, the western United States was in the grip of a new epic drought. The Sierras had no snow. Hundred year-old orchards were dying. Reservoirs throughout the state were draining dry.  Above Los Angeles, they were pouring plastic balls into their reservoirs to slow evaporation. Desalinization plants were once again under discussion, despite the costs and environmental complications.  In Nevada, Lake Mead sank to to historic lows, and Las Vegas finally completed a multibillion megaproject to dig Intake Number Three, a last bid attempt to allow them to pump from a reservoir that had been sinking for a decade. In the Northwest, fires raged through tinder dry forests, and a heatwave seized hold of Portland, Ore.

When I conceived The Water Knife, I was aiming to create a visceral experience of a future that I feared was rushing toward us. I thought I was being sober and serious when I set the Big Daddy Drought of the novel some decades still into the future.

By the time the book actually came out, snowpack in the river drainage where I live was at 1% of normal.

In some ways, the droughts of 2015 made The Water Knife seem prescient.  The news was stuffed full of stories of wells going dry, battles over water rights, farmers watching worriedly as dry cities turned their thirsty gazes on farmers’ water rights.  And then of course, there was Syria, collapsed into a civil war that looked a lot like what a model for a real water war might look like. Not a war over water, but a war sparked and exacerbated by drought and food scarcity, that was already starting to put domino pressure on other countries as refugees began to flee the horror of their collapsed country.

There it all was: fires, scarcity, refugees.

It made The Water Knife seem, if not predictive, at least entirely reasonable.

But the feeling I really had was that I had missed the story. Even though I had been trying to write a future of water scarcity that would seem both real and believable and imminent, as I went out on book tour, I realized that I had been deluding myself as much as an idiot climate denier like Rick Pray-For-Rain Perry.

In attempting to make the book seem reasonable and “realistic,” I had set my climate disaster a comfortable few decades still in the future.  But the the uncomfortable reality that even I don’t want to honestly face is that we simply don’t know when climate disaster will come. Science tells us that that climate disaster is out there, looming—more and more likely to occur—but no one can say exactly when. And as I toured the parched western states last year, it was a little frightening to realize that even someone like me—who spends most of my time being anxious about what tomorrow may bring—would prefer to delude myself into believing that while the risk is out there, it won’t come yet.

That’s our problem. The same problem we humans always face.  Our human instinct is to pray and hope that even if  bad things are coming, that they aren’t coming yet.  I make fun of Rick Perry because hides from the data that says his state will increasingly become a desert, but really, we’re all in denial.

I certainly was in denial, even as I wrote The Water Knife, even though I couldn’t see it.

We want to keep flying around the world, and driving our cars and expanding our cities into deserts. We want to keep buying gasoline and importing our gadgets from around the world, and enjoying the fruits of our technological age. We want so desperately to keep going with our immediate comforts, that we willfully avoid the fact that Not Yet might turn out to be Right Now.

Right now, El Nino has been kind enough to dump some rain on California and some snow in the Rockies, and so we might be tempted to think that today really will turn out to be Not Yet. But down in Australia, where drought has run for the last decade, the reservoirs outside of Perth aren’t just low as they are here in the States—they’re empty. Syrian refugees continue to swamp Europe, people desperate to get away from the conflict in their own land, and the dams and rivers of the middle east are strategic assets for the warring powers. And of course, here in the United States, we see demagogues and fear-mongers gaining in popularity, the politics of fear of outsiders who might need desperately to move as their own parts of the world become uninhabitable.

One thing I do think I got right in The Water Knife is that climate crisis and collapse won’t come all in a rush. It will be a slow accretion of problems, accidents, and missteps. A steady accumulation of stressors and shortages that finally trigger political and social unravellings, that then cause further domino effects. The Water Knife isn’t about a lone hardy band of survivors after a climate apocalypse, it’s a story about millions of people, all trying to adapt and shift, after spending too much time believing that Not Yet meant Never Will, and I think I got that right, because I see my own instinct to keep making bargains with against my son’s future, telling myself that I still have time before a true catastrophe. Telling myself that we all do, even if it’s just another decade or two.

Some people say that a story like The Water Knife is unrealistic. A broken future that will never be, because we won’t ever be that stupid, or selfish, or lacking in foresight.

I do hope they’re right.

Read an excerpt (expand on the page). Visit the author’s site.