Thoughts on this year’s Hugo finalists (the list of which you can find here):

* First, as part of my new gig at the Los Angeles Times, I wrote an analysis of this year’s ballot there, so head on over there if you want to see it (Note it’s geared toward a general audience, so there a lot of explanatory stuff in there folks here will likely already know). As I’ve already written substantially on the Hugos there, what I write here will be brief.

* Overall, the nominations in several categories look pretty decent to me – Best Novel is particularly not bad at all! At least a couple of categories are a tiresome shitshow, however, thanks to the Puppies, again.

* Which we knew might happen again, remember? Fixing the slating issue was a two-year process. This is year two. Keep working on it, folks.

* The Puppies are once again trying to troll a bunch of people (the Best Related Category is one particularly obvious troll) and while I don’t mean to downplay the basic craptasticness of their actions, I’m finding it all that difficult to get worked up about it. I mean, I know the Puppies are hoping for outrage? Again? But as noted, we’ve seen this act before, and this time it’s just boring. Yes, yes, Puppies. You’re still sad little bigoted assholes screaming for attention. Got it, thanks.

Bear in mind I’m a direct target for their nonsense; at least two of the finalist works go after me in one way or another. I’m very specifically someone they’re trying to get worked up (and to tear down). And yet I just can’t manage it. I’m pretty much over the Puppies. There’s only so many times a toddler can throw a tantrum before you just shrug. You still have to clean up after the toddler, mind you. But you don’t have to let the toddler dictate the terms. Pity these particular toddlers are grown humans.

Aaaand that’s about all the energy I’m willing to expend on the Puppies this year: A tiny bit of pity, and then consideration of the things on the finalist ballot worth my time – which, fortunately, there are several, and would have been no matter what the Pups did. 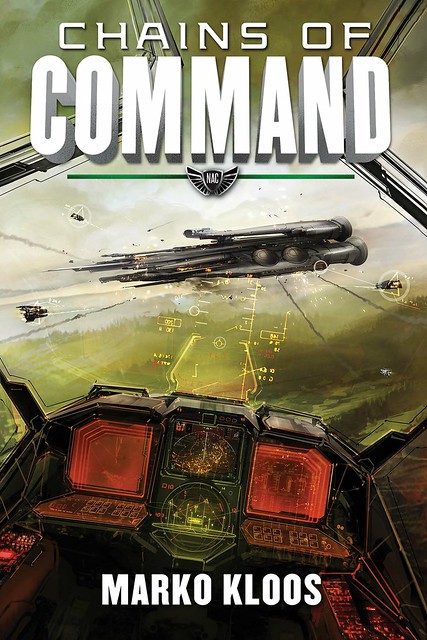 The first book of what is now called the Frontlines series came to be because of a highly effective motivator: last-minute deadline panic.

Eight years ago, I applied for a slot in a writing workshop called Viable Paradise. I knew a few people who had attended VP, and they all spoke highly of it. When I checked the roster of instructors, I was happily surprised to see the names of some heavy hitters in the SF business: Steven Gould, Laura Mixon, Elizabeth Bear, Patrick and Teresa Nielsen Hayden, Jim McDonald and Debra Doyle, and some guy named John Scalzi. To top off the list of arguments for attendance, the workshop was reasonably affordable, geographically close (it takes place every year on Martha’s Vineyard, and I’m in New Hampshire), and took only a week, which was eminently swingable on both my stay-at-home parent schedule and stay-at-home parent wallet.

The only trouble was that I heard about the workshop a week before the close of the submissions/application period, and I needed a few short stories or novel chapters to send in as application pieces for evaluation. I had neither.

So I sat down and wrote a few chapters of a fantasy novel that, in retrospect, should have been titled “The Journeys of Generica: Book One of the Derivative Kingdoms Saga.” At the time, I thought it was decent enough, and I gave the samples to my wife to read. She did so, and then tactfully suggested that I may want to send in, uh, something else.

With six days to go on the application deadline (and having to subtract two days from that to account for Priority Mail), I was in a bind. While I had always wanted to write SF or fantasy, I had no finished or even reasonably progressing projects in either genre on hand. I had two trunk novels sitting on my hard drive, but they were general fiction. I had recently read a novel called Old Man’s War by John Scalzi, and figured that because I enjoy reading military SF, I’d probably enjoy writing a military SF story. I served in the German military during the tail end of the Cold War, and I had always wanted to have a vehicle to make use of all the little sensory details and experiences from my own military service, and baking it all into a Military SF novel seemed like a good idea.

The boot camp sequence is practically a trope in the Military SF genre, and “Young Person Goes To War” is shorthand description for three quarters of Military SF debut novels. That’s not a terribly bad thing—when you go to the zoo, you’re either happy to see the giraffes again or you aren’t, and Military SF readers in particular like to see the giraffes, so to speak. But I had this idea in my head to put a different spin on my version of Space Marine Boot Camp. Current recruiting practice treats the new applicant as a valuable resource because the military usually has to work hard to fill all its slots with volunteers. Most future boot camps in fiction do the same—the old saw about tough drill instructor love, motivating the recruits to excel and be All They Can Be.

What if you had a future military that was so swamped with applicants that the D.I.s wouldn’t have to give a rat’s behind whether their charges make it through training or not? What if the D.I.s could wash people out at will because they knew exactly that five hundred applicants would stand in line tomorrow to take that slot?

From there, it was a simple exercise: thinking up a near-future version of North America where life sucks. Overpopulation, pollution, rampant crime, scarce resources, a population limited to 2,000-calorie-a-day rations of processed crap that’s made to taste awful on purpose to discourage overconsumption. Things would have to be so awful so much for the majority of the population that the prospect of death in battle would seem a fair trade for a shot at a paycheck and food that isn’t made from soy and recycled human waste.

With only a few days to think about the world-building and actually doing the writing work, I drew that crapsack world in rough sketches—just enough detail for the reader to get the idea, not so much that I’d have to spend weeks and months making up maps and diagrams and elaborate timelines. So Terms of Enlistment, the first Frontlines book, established the main conceit of the series, the grunt’s-eye view of the conflict, told in first person perspective. We see what the protagonist Andrew Grayson sees. We know about the world and its technology what he knows—no more, no less. It sort of puts the tech and the political machinations into the background bit and makes them scenery. With that kind of storytelling approach, other things move into the foreground: all the sensory details and awfulness of battle as experienced by the guy who doesn’t have a god’s eye view of events, filtered through the worldview and morality of a twenty-year-old kid from the future version of the projects.

With Chains of Command, the Frontlines series is now four books strong, with a fifth one in the works and a sixth under contract. My hasty half-ass first few chapters set the foundation for everything that followed, and it turned out to be a fortuitous restriction. With the immediate viewpoint and the broad-stroke pictures of the world as Andrew sees it, I was free to focus on character development instead of meticulous world-building and exposition. And as Andrew gets older and more experienced, the novels start addressing things that he would begin to think about after a few years of service to a system that tries to hold the lid down on a pot that’s about to boil over. Do you always follow orders, or are there just and unjust ones? At what point do you use your own judgment and question authority while fulfilling your oath of service? Military SF is often focused on the pulling of triggers (complete with three-page descriptions of the weapon system to which said trigger is attached), but how do you decide when not to pull the trigger?

Frontlines makes an attempt to address that conundrum, and it has been great and challenging fun to let young Andrew Grayson mature over the course of four novels and find his own answers to those questions.