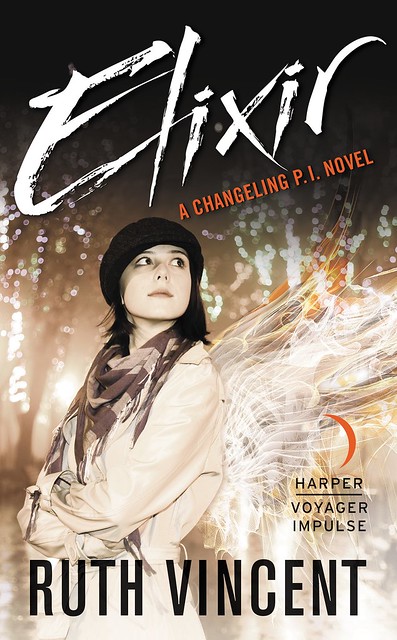 In today’s Big Idea, debut novelist Ruth Vincent essays this issues of depth, darkness and delight, as they relate to novels in general, and her novel Elixir in particular.

Does a story need to be dark to be deep? Does substantive always have to equal depressing in fiction? I’ve always firmly believed no, and in my debut novel my goal was to hit that point of intersection between joyful and thoughtful. My series fits the nebulous category of ‘urban fantasy’ because it takes place in modern times albeit with magic, and it’s set at least partially in a city (not just a city, but the city: New York). But I’d grown tired of the gratuitously grim urban fantasies that had become something of a trope in the genre. I wanted my book to be unabashedly fun, without being fluff.

How to do that, I realized, rested almost entirely on the narrative voice. And thus I wrote my story in the first person POV of a fairy. Fairies don’t have the same level of damage as vampires, werewolves, or other such supernatural creatures. They’re not cursed; they’re not tortured – they’re not necessarily good, but they’re hardly ever grim. Even the fairies in Celtic folklore, while a far cry from the sanitized pixies of Disney films and frequently malevolent, are usually depicted as playful. If I wrote a fairy heroine who wasn’t enjoying her own story, I wouldn’t be being faithful to the mythological roots.

My heroine, Mabily “Mab” Jones, has a unique perspective in that she’s a changeling; she’s in the human world but not of it. It’s a position that comes with inherent conflict – loneliness, inability to ever truly belong, plus hurt at her betrayal (she was tricked by the Fairy Queen into getting stuck in human form) and a deep-seated guilt over the human girl she unwittingly displaced. However, twenty-two years after the switch, when the story begins, Mab has learned to make the best of a bad situation. She’s a bit of an amateur anthropologist – a student of the human society into which she’s been thrust. She finds us humans fascinating, frustrating, but always wryly amusing. In the hands of a different author or through the eyes of a different narrator, this could have been a much darker story – but Mab still sees her human life as a grand adventure (though one she never chose) and her optimism is the filter through which we read some of the more brutal and disturbing aspects of the book.

Writing a book that reads as effortless actually requires a lot of effort, perhaps more than one that doesn’t. I wrote almost 1,000 additional pages of drafts that I ended up throwing out before I honed in on the voice I was seeking. Luckily, since it was my first book and I didn’t have a deadline breathing down my neck, I had the luxury of time to do that (this will not be the case with Elixir’s sequel, which releases later this year!)

When I say Elixir was the first book I ever wrote, what I mean is it’s the first book I ever finished. My hard drive is a burial ground where many unfinished manuscripts have gone to die – weighty, ‘important’ works that I grandiosely day-dreamed would win me respectable literary acclaim, but then ultimately abandoned, because I didn’t find these stories fun enough to sustain me when the writing got tough (as writing inevitably will.)

This doesn’t mean I don’t explore the dark side of the human heart in my fiction – I find fantasy the best medium for doing that – or that I can’t explore deeper societal issues. My stories have never been overtly political, and yet the opportunities for metaphor are rich. The series is about a society (fairies) utterly dependent upon a limited, non-renewable resource (Elixir) that powers all their magic and their way of life. They do increasingly unethical things to produce and control it, and innocent children caught in the crossfire pay the ultimate price. Sound familiar? But a reader could easily miss all that and simply be entertained by an adventure tale with a touch of romance. I tried to never lob readers over the head with any heavy handed message. I’ve always believed writers should just tell the story – and not deprive readers of the pleasure of their own interpretations by telling them what it means.

I was academically trained to write literary fiction, and I was afraid, if I wholly embraced writing the genre fiction I so delighted in reading, I would never become a “serious writer.” Perhaps that’s true. Urban fantasy novels don’t exactly get reviewed by The New Yorker. But in writing Elixir I realized I didn’t want to be a serious writer; I wanted to be a joyful writer.

Maybe we write the books we want to read? As a reader, I wanted a less brooding, less bloody book, a fantasy whose epic battles are of the internal variety. And as an author, I know what a long hard slog writing a novel can be. The only thing that sustains me, once the heady infatuation of the initial idea wears off and the rewrites seem Sisyphean, is joy.

It’s joy that I want to spread through my stories. After all, the world is depressing enough on its own – we don’t need all our novels to be.