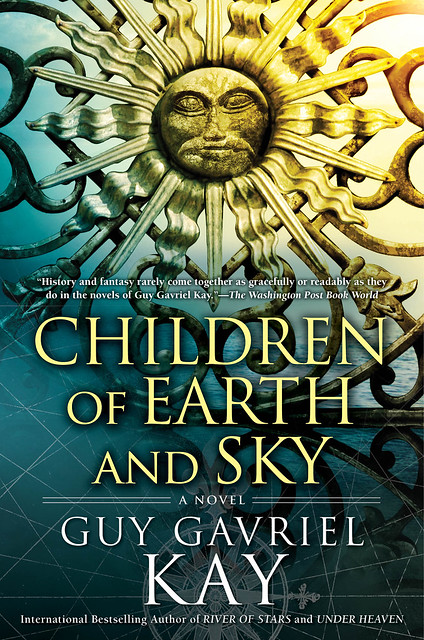 For today’s Big Idea, Guy Gavriel Kay is here to share a favorite passage from a writer of histories, and what that passage has to do with his latest novel, Children of Earth and Sky.

I’ve told a cute (and even true!) origin story of Children of Earth and Sky elsewhere. It involves my Croatian publisher driving too fast on a Roman road from Zagreb to the Dalmatian coast and suddenly getting An Idea: he told me I really needed to write a book about the Uskoks – Renaissance era pirates of the Adriatic whose town had been just ahead of where we were. (I didn’t know that back then, either, don’t feel badly.)

That was a decade ago, just about, but I did write that book. My new book. Eventually. Two other books came first, but…

But what I want to talk about here is another element of the origins of the novel. It isn’t the funny part, with me urgently asking him to please watch the twisty road instead of gesturing excitedly with both hands and twisting to look at me. This is the, well, the ‘thinking about the past’ part. Serious? I guess. But that’s what I do, for better or worse. I read a lot in history, I correspond with scholars, I buy them drinks, I travel, I steep myself like a Canadian teabag in boiling branch water. (Yes, I mixed northern and southern geography big time there, but I like it, so just … leave it alone, John Scalzi!)

So, the other key to Children coming together for me was a passage in a book. A great book. A monument of historical writing called The Mediterranean World In the Age of Philip II, by Fernand Braudel. I could write an essay on the greatness of Braudel, but I’ll let those intrigued google him (then read him!). I’ll say I first read this magisterial work when I was researching A Song For Arbonne 25 years ago, but it occurred to me that I might just possibly not have it entirely memorized, and a reread might be useful for the new book, mixed in with the books and articles I’d collected as I entered the research phase for Children.

Good idea, that. I get them sometimes. There is so much to be learned in Braudel, for anyone interested in the subtle, long-term forces that act upon history – and therefore on us. But here comes the point, for this essay. One passage. A short passage in a massive book leaped out at me, made me grab pen and notebook and write it down. Here you go:

“Between two enemy religions it would be unwise to imagine a watertight barrier. Men passed to and fro, indifferent to frontiers, states, and creeds. They were more aware of the necessities of shipping and trade, the hazards of war and piracy, the opportunities for complicity or betrayal…”

It wasn’t that this was a shocking new thought. It is a motif I’d even touched on before in books, but the awareness came hammering home that this – this! – was a part of what the new book was going to build itself around. I was already thinking about borderlands, lives lived there, the instability (often violently so) of where the borders were, the wars waged to change them, the decisions of the ‘great’ hugely impacting ordinary lives.

What Braudel reminded me was that it went the other way, too! Men and women did not necessarily subscribe to the desires and ambitions of their leaders. They wanted to get on with their lives. Feed and shelter their children, cut enough firewood for the coming winter, build fences to protect the livestock, walls against raiders, trade with the so-called enemy (even ‘infidels’ at times) if it would help get food for those children. They wanted to arrange to marry their daughter to the son of the farmer next door (unless they hated the farmer next door). They were preoccupied by a laborer’s illness at the wrong time (harvest season!), by an insult in the tavern, by fears for their own immortal soul. They thought about trade goods and desire and gossip and needing new oxen and the pleasures of a spring morning with the leaves coming.

These ideas, these priorities in the lives of people locked in for me as core themes for the new book. I’d aim for a novel that touched upon, that even appeared generated by a massive conflict among powerful empires and states. But I’d use that as a backdrop, a framework, for a book that paid really close attention to how men and women sought (with varying success) to live and shape their own lives in such times, across such borders, during the wars.

That’s what a single passage in Braudel brought back home to me, and what Children of Earth and Sky told me it wanted to be about, right then. That’s what I’ve tried to make it. The stories of the ‘great’ are not the only stories we have to tell.