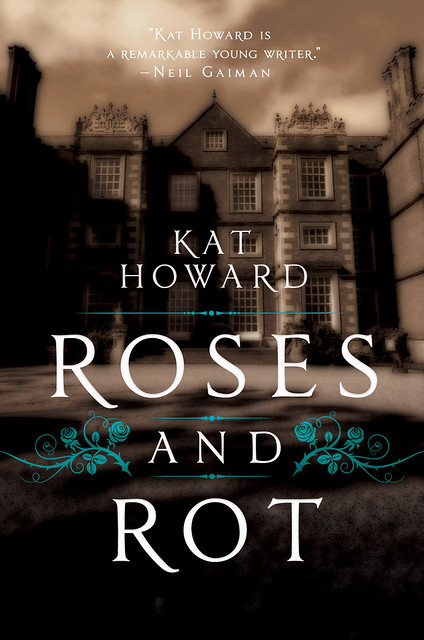 “What price fame?” You’ve heard the phrase before, no doubt, but with her novel Roses and Rot, author Kat Howard puts a spin on it that you’ve probably not experienced before. Here she is to explain it.

My debut novel, Roses and Rot, is an extremely loose retelling of the “Tam Lin” ballad. Loose enough that I usually call it a riff, not a retelling – I took some of the pieces I liked, tossed others, switched some around. But my favorite part – the part that led to the big idea that led to the writing of the novel, well, that’s gone.

It comes out in the original ballad that the young and handsome Tam Lin is in trouble because he has been stolen away by the Queen of the Fairies. Sounds like a good deal, right? Well, not exactly:

And pleasant is the fairy land,
But, an eerie tale to tell,
Ay at the end of seven years,
We pay a tiend to hell,
I am sae fair and fu o flesh,
I’m feard it be mysel.

(Text from Child Ballad 39A)

And I was fascinated by this idea – the idea that somehow, somewhere in the past, something had happened to put Fairy in a sort of vassal relationship to Hell. I love this tiny piece of the ballad, but as much as I wrestled with the idea, the connection between Hell and Fairy is something I haven’t figured out it.  And no matter how hard I tried to wedge anything Hell-related into early drafts of what became Roses and Rot, it didn’t work. So I had to let it go. But that didn’t mean I had to let everything go.

In the ballad, Tam Lin has no great desire to go to Hell. And so he asks his lover, Janet, to save him so he doesn’t wind up paying the tithe that Fairy owes.

Roses and Rot as it is now came out of thinking about that. About thinking about what kind of relationships were strong enough that you could ask someone to rescue you from Hell – which was, in the ballad, a difficult and dangerous task. And about what would happen if the person who was chosen for that sort of sacrifice actually wanted to go.

Hell is easily avoided if it looks like Hell. And Imogen and Marin, the two sisters at the heart of Roses and Rot, grew up in a situation that gave them a pretty good idea of what Hell looks like. They’ve spent their lives doing everything they could to make sure they got out, but it’s never quite worked. Their Hell took the form of a person, their abusive mother, and she keeps tracking them down, keeps sliding back into their lives.

But what happens if there’s something that happens after going to Hell, and that something looks like magic, like a gift, like everything you’ve ever wanted, handed to you on a plate? What if this after (or its equivalent, since Hell as a place isn’t in Roses and Rot) looked so good, there is a competition to go to Hell?

Here’s the deal. I’ll offer it to you: You get success, guaranteed, absolute top of the charts, your name lives forever, sort of success. But first, you spend seven years in a place that’s not very nice. That might in fact be so bad you could think of it as an equivalent of Hell. Oh, and not everyone who goes makes it back out alive.

Do you take the bargain?

Imogen and Marin are two young women who’ve already been through Hell once, and they’ve gotten themselves out the other side of it. They’re both artists – Imogen a writer and Marin a dancer. They’ve worked hard, made sacrifices. What’s being offered is everything they’ve ever wanted. And there’s only one spot.

Death’s a risk that might seem acceptable to you if you grew up somewhere that felt like Hell, and paying the tithe would be your guarantee that you would be safe in the future. It might also be an acceptable risk if you’re an ambitious artist, close enough to see success, but not quite close enough to securely grab it. But your death might not be an acceptable risk for someone who loves you. They might not be able to just stand back and watch you go. They might decide to save you, even if you don’t want to be saved. Even if saving you means making sure that you don’t get everything you’ve ever wanted.