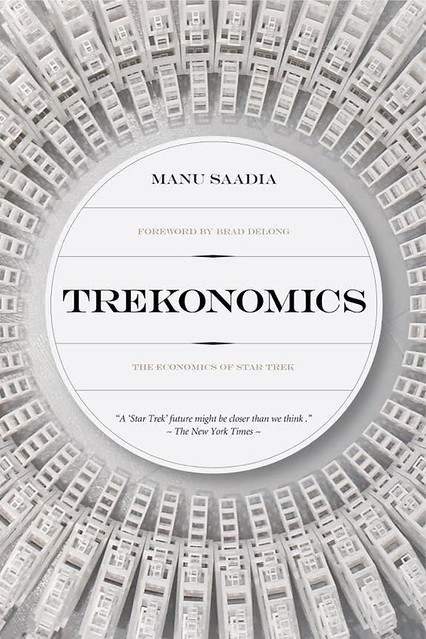 In the future, we will have space travel and transporters and tribbles… but will we have a robust and coherent economic system? And if so, what will it look like and how will it actually function? These are the questions that Manu Saadia has asked, and in his book Trekonomics, attempts to answer.

As you may have heard by now, Star Trek turns 50 this year. Over the past 50 years it has become an integral part of our lives. It is a signpost in popular culture, a legit, iconic piece of Americana.

As a result, everything has been written about Star Trek. You’ve got books on the physics of Star Trek, the religions of Star Trek, the philosophy of Star Trek (my favorite: The Wrath of Kant), Trek fandom, Gene Roddenberry William Shatner, Leonard Nimoy, etc, etc. Star Trek is a literary genre in and of itself.

I’ve read a lot of these books over the years. After all, I am a dedicated fan. Yet, I couldn’t find a book about the economics of Star Trek. For some bizarre reason that crucial aspect of Trek, perhaps its most singular, had not been covered. To paraphrase the other franchise, this was the book I was looking for.

We all know that there is no money in Star Trek’s 24th century. But it goes far beyond that: in the Federation there is neither hunger, poverty nor any of the economic challenges and rewards that make our 21st century lives so interesting. In Trek’s world, what British economist John Maynard Keynes called the “economic problem,” the necessity to work to sustain ourselves, has simply gone the way of the dodo.

In the book I examine three questions: first, how does economics actually function in Star Trek’s universe? Second: is Trekonomics internally consistent? And thirdly, is it even remotely possible or is Star Trek just another cheesy SJW communist Kumbaya in space?

The C- or the S- words are the elephant in the room when it comes to Trek. Let’s dispose of that once and for all. No, Star Trek is not a communist utopia in space. It is not communist (or socialist) because communism was an economic and political response to Keynes’ economic question – how to best organize and distribute scarce resources. In an over-abundant world such as Star Trek’s, a post-scarcity world, the issue of ownership is moot. It’s very much like Iain Banks’ Culture. Why would you want to own the means of production when the value of the things you produce has converged to zero? Or, in other words, when a replicator can make any gizmo at will, there’s very little point in trying to corner the market on gizmos. Besides, there are much more rewarding things to do with your existence – mapping stellar gaseous anomalies, studying new life and new civilizations, being the captain of the flagship, boldly going etc…

To my great surprise, Star Trek’s economic ideas are remarkably consistent. The show does not break much of what we currently know of economics. Furthermore, it turns out that elements of Star Trek’s speculative political arrangements already exist in our own world – namely, the practice of making some technologies and services free and available to all without restriction, as public goods (think Wikipedia or the GPS). This strongly suggests that post-scarcity is as much a political decision as it is a matter of technological progress. That being said, as Paul Krugman wryly observed at NY Comic Con, what may hold us back on our way to a Trek-like utopia is the human propensity to remain stubbornly unhappy.

Speaking of unhappiness – throughout the years, whenever I got depressed I would usually sit down and watch a few episodes of Star Trek so as to get transported to a better and happier future. Star Trek always had a therapeutic, reparative, function in my life. But not just that: I am the kind of guy whose marriage vows were ‘live long and prosper,’ and who inserted ‘live long and prosper’ in his son’s birth announcement. While I do not usually cosplay, you could say I am a Trekker for life.

This book is a love letter to Trek, if a bit on the wonkish side. It is an attempt to demonstrate that Star Trek’s optimism, so often derided if not summarily dismissed, rests largely on its economic premise; and that said economic premise is the opposite of naive or crazy. I believe that Star Trek truly fulfills philosopher John Rawls’ famous thought experiment on the veil of ignorance: what kind of society would you design if you did not know in advance what would be your place or position in that society? Chances are it would look like the Federation’s utopia, sans the spaceships and the aliens.