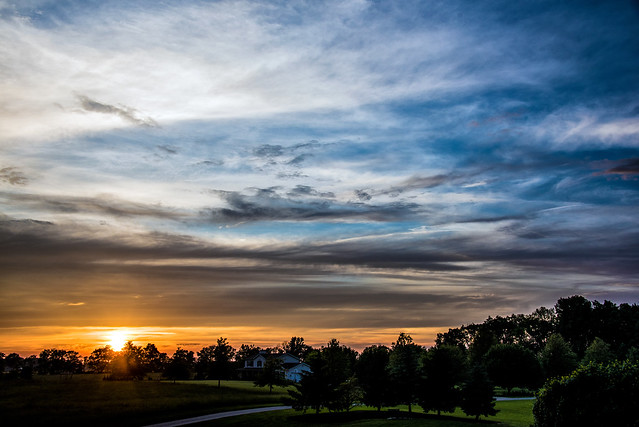 My wife texted me from downstairs to make sure I got a picture of the sunset tonight. Good call (or, uh, text). 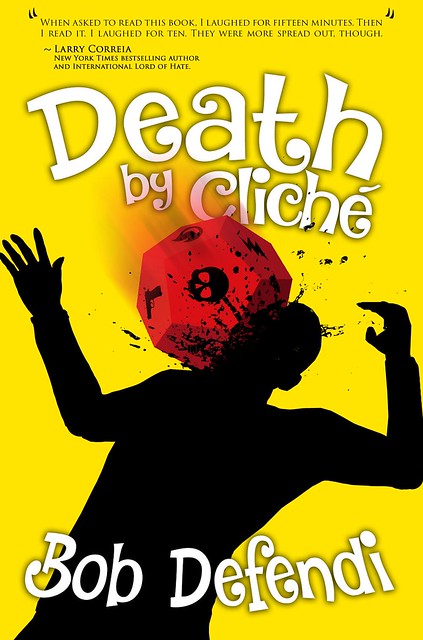 Bob Defendi is a gamer who knows what it’s like to be trapped in a bad game session. But as the writer of Death by Cliché, Defendi decides to take that bad game session one step farther. It’s a big step. And it goes straight down.

Mel Brooks said. “Tragedy is when I stub my toe. Comedy is when you fall into an open manhole and die.” The dark truth of comedy is that in every comedic situation, someone feels pain. Sad clowns have been a staple for far longer than people have been stapling clowns. Humor is a joyful, shining light, but it only shines because something burns.

Too morbid? How about this:

“You enter a room lit by flaming brassieres.”

Death by Cliché started with this image. A group of mature, experienced gamers gathered around a game table in a local store with a theoretically post-pubescent kid running the game. As the word “brassieres” spills from his mouth the adults exchange glances, and their stomachs sink. They know that they just sat down to play the worst game of their lives.

There’s a game designer at the table, however, and he is there to save them. He has turned his passion for games into a career, and he’s discovered that anyone who thinks work is a four letter word has a damn-poor vocabulary for swearing. There’s a dichotomy to the old axiom of “do what you love,” because turning your passion into a career irrevocably alters your perceptions of the form.

Did I mention that this is a true story?

You see, I once received a call from the marketing department of a major game company. A kid they knew to be a looney was about to demo their brand new game at a local game store. They knew it was going to be a train wreck. My job was simple: Go to the store, assess the game, and likely stage a coup because a bad game is far worse than no game, and they didn’t want complaints of “epic fail” to cost them the Salt Lake City market on the eve of a new release. I remember thinking that my worst case scenario would be to simply end the game and send everyone home before things got too ugly.

Here’s where it stops being a true story, and starts being a story filled with truth.

Our hero cannot have an easy out. He must be trapped, and so I, Bob Defendi set out to trap the semi-fictional Bob Damico in the worst game of all time. I would transform my—err I mean HIS—greatest love into the very embodiment of Hell.

That meant I’d have to kill him. The department of ironic punishments owns your sorry ass now.

Death by Cliché is about terrible storytelling. It’s about a man with deep knowledge of the form riding a train wreck like an Alanis Morrisette cover of an Ozzy Osborne song. It had to be painful enough to be funny, and funny enough to leave readers begging for more. It had to have the structural integrity of Buckminster Fuller’s bath house, built on a foundation of buckwheat pancakes.

Clichés are painful. They’re terrible. Under almost no circumstances do you want to let them into your story. You certainly don’t want to fill your story to the brink with them. You absolutely, positively don’t want to build the entire story on the bones of clichés and on the blood of bad storytelling.

Because that way lies madness.

And you really don’t want everyone to buy a copy, so you’re forced to do it all over again in a sequel.

Or maybe all of that is hindsight. Maybe I had no grand plans. Maybe I wanted to name a character Bob and start the book like this:

“Authors who write their own chapter quotes should be shot.”

Then shoot him in the head.