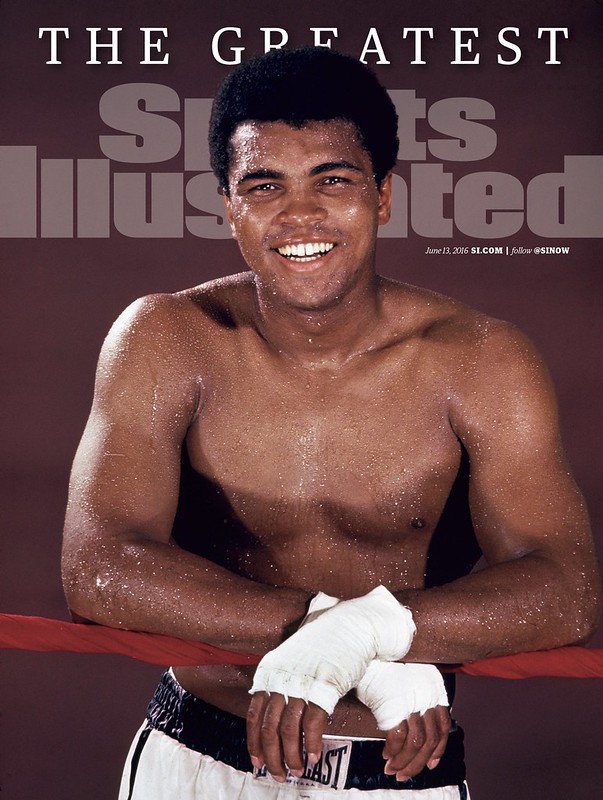 I cried for Muhammad Ali when I was eight years old, the night he fought and lost to Leon Spinks, February 15, 1978. When I was eight years old Muhammad Ali was everywhere, the best known and most admired athlete in the world — he even had an animated television series, for heaven’s sake! — and everyone knew, without qualification, that he was The Greatest of All Time. I knew that too, took it as an article of faith. The Greatest of All Time, a living legend, was a man who simply could not be defeated, certainly not by Leon Spinks, who I had never heard of before and who I, in the depth of my understanding at the advanced age of eight years old, considered something of a palooka (had I known what the word “palooka” meant at that age, which I didn’t). But he did lose to Spinks, and I sobbed for hours. For Ali to lose to someone like that unmoored my understanding of the world. It was literally my first crisis of faith.

What I didn’t understand then, and wouldn’t fully understand for years afterwards, was that Ali was not called The Greatest of All Time because he was undefeatable in the ring. He was defeatable, five times in his career, even if the other 56 times he out-thought, out-fought, out-danced, and out-psyched the other men in the ring with him, his artistry in doing so becoming the foundation of his greatness for most people, including me. What made Ali The Greatest of All Time was the totality of who he was, outside the ring as well as in it.

The world doesn’t need me to recount the details of his life — there will be enough obituaries that will do that, and I can say with utter confidence that there are vast numbers of people better equipped, for all sorts of reasons, to eulogize the man. What I can say is that from that early crisis of faith at age eight to today, almost 40 years later, my understanding of Ali changed from him being a simple god on a pedestal, someone who was The Greatest of All Time by acclamation — and who was I at eight years old to argue — to him being a complex, difficult, imperfect and inspiring human being, a product of and a shaper of his time. What was true at age eight is true at age 47: He was The Greatest of All Time. What changed was not Ali. What changed is my understanding of him, and what greatness is.

Let me talk a moment about Ali being both a black man and a Muslim. In the wake of his death, you’re going to see people saying that Ali transcended his race or his religion, or both of them, to become someone who belonged to all people. I think two things about this. First, it’s undeniable that people of all races and creeds admired him, his life and his accomplishments. I loved him as a child, when my understanding of him was simple, and I honored him as an adult, when my understanding of him was more complex.

But — and this is the second thing — you cannot love or honor Ali properly without acknowledging that blackness and Islam are at the core of his greatness. It seems to me, and I think the events of his life bear this out, that the greatness of Ali — who he was — was did not come out to you, was not there for you, and in a fundamental way did not care what you thought of it. It was there, and you could come to it or not, and if you did, you had to take it on its on terms. On Ali’s terms. And Ali’s terms were: He was a black man, in America and in the world. He was a Muslim man, in America and in the world. He was who he was. He did not have to transcend those things about himself. You, however, might have to overcome your understanding of what you thought of both blackness and Islam to appreciate him. People did or did not; Ali went on regardless.

I think it’s important that when I was an eight-year-old child, one of my idols, one of my pantheon, someone whose greatness I accepted uncritically, was a black man. I’d like to think in a small, early way that my love for Ali made a difference in how I grew up thinking about race. As I grew up, and I learned about his experiences being black in the US in the mid-20th Century, his refusal to submit for the draft and his reasoning for it, and his conversion and movement through Islam — and the responses to all of these by others as they happened — Ali was an unwitting but invaluable teacher.

I can’t say I have a perfect understanding of race or religion or of blackness in America or of Islam. The imperfections of understanding of each of those is on me. But I can say that to the extent I engage in any of them with any measure of success, Muhammad Ali is part of the reason why. Because he was black. Because he was Muslim. And because he made me understand that both of those were fundamental to his greatness, not things he needed to transcend to be seen as great.

My friend and classmate Josh Marshall noted earlier today that the decline in interest in the sport of boxing over the last few decades makes it difficult for younger people — especially under the age of 30 — to understand the scope of Ali’s greatness in his time. I think it also means, particularly with regard to the sport of boxing, that Ali’s appellation as The Greatest of All Time is unlikely to be seriously challenged, ever. It’s not that other boxers won’t have better records; it’s not that other boxers won’t be great. It’s that for a moment in time, boxing had in its ranks a man who could and did shape his nation and his world with his athletic talent, his political courage, his devastatingly sharp mind, and his great heart.

He was Muhammad Ali and there will never be another like him. I cried for him when I was eight because I did not understand why he was The Greatest of All Time. I understand now. I cry for him again because I do.