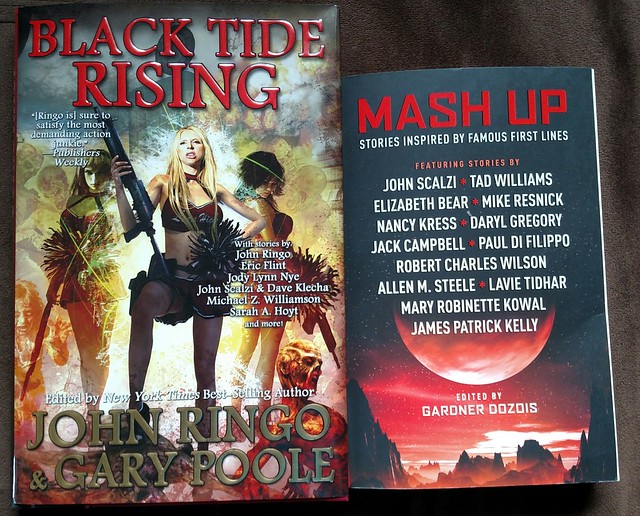 Oh, nothing, just a reminder that there are two anthologies being released today in which I have short stories. The first (alphabetically speaking) is Black Tide Rising, set in John Ringo’s zombiverse, for which I and Dave Klecha have contributed the story “On the Wall”; the second being Mash Up, in which my fantasy/horror story “Muse of Fire” resides (Mash Up is the printed version of Rip-Off!, originally an audio-only anthology).

Both are available at your favorite bookstore, and if they are not, then tell them to special order! That’s right! You can do that!

Also, Amazon Author Rank? What the hell are you.

To which I responded:

There's a certain point where you just let go of Amazon rankings because they have no relation to overall reality. https://t.co/ELJaaJNiDz

Which got me some “haa lolz sour grapes” comments which left me slightly confused, so I had do a bit of digging. Which, along with the desire to generally expand on this comment, led to the following.

A series of "inside pool" tweets coming up. It'll be over quickly.

1. Got some sporky responses yesteday to my comment that Amazon Author rankings don't mean much overall; finally figured out why…

3. This happened recently, so that my unrelated comment to a third author on the matter was seen as a response to the first dude. Yeah, no.

4. One, it's nice my muting is working, since I learned about this nonsense by turdy little minions days after the fact. Best Twitter ever!

5. Also, really: Amazon Author rankings don't mean much in terms of overall sales, etc, especially if you sell in places other than Amazon.

6. I've had single digit Amazon Author rankings in SF/F; I've been off the list of 100 entirely. As far as I can see, no impact on sales.

7. The Amazon Author rankings may be marginally more relevant if you have no access to other sales venues. Otherwise, meh. It's for show.

8. Which is not to say that if you have a high Amazon Author ranking (or higher than mine), you shouldn't enjoy it. Congrats! It's nice.

9. But if you're using it as a way to status check yourself against other authors, then basically I'll just pat you on the head and move on.

10. Also: Guys, I've rung my bell in terms of money and notability. I'm happy. You're doing better than me? Great! I don't actually care.

11. I have all the money and notability I need. I'm set. What I want now is to write books I like, for people who I hope will like 'em.

12. If you feel the need to compete against me, well, it's your life. But I'm not showing up for the competition. My life is not about you.

13. (This doesn't mean I won't be happy when cool things happen to me. Just that I'm not looking around to see who I'm "beating.")

14. In short: If your anxiousness about status makes you try to snark me about mine, well, that's adorable. Hope that works out for you.

15. And more generally, creative folk: Think about WHY you're concerned about status and its signifiers, and what it says about you…

16. …it's not wrong to keep an eye on them. Just remember, it's not a zero-sum game. There's room for all sorts of success.

As promised, a kitten pic. pic.twitter.com/qWwBXEJqkD 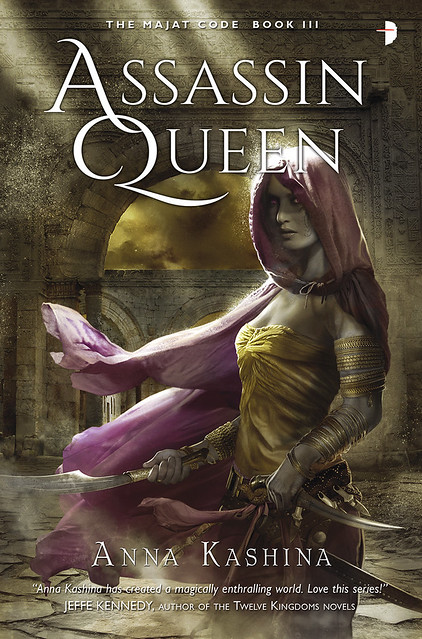 Warriors live to a code — but what if in a moment of crisis, that code ties your hands? Anna Kashina confronts such a scenario in her novel, Assassin Queen.

“Assassin Queen” is the third and concluding book in the Majat Code trilogy, which was ultimately driven by one big idea: what would happen if immense power were to be confined by very strict rules? In particular in this series, what if you were an extremely powerful warrior, but in exchange for this power you had to live by a highly restrictive code, which would ultimately prevent you from doing what you believe is right?

This topic has fascinated me over the years, and weaves into a lot of my writing. In the Majat Code, I have finally satisfied my desire to explore it on the backdrop of a story set in medieval multicultural world featuring political intrigue, romance, adventure, and lots of fancy swordplay.

The central action in the series belongs to the Majat warriors: an elite guild of fighters that could be thought of as Eastern martial artists integrated into the medieval Western setting. The Majat Guild trains the best of the best, and then hires out their services to the highest bidder. Warriors of their top, Gem ranks, are valued the highest, especially the Diamonds that are few and far between. Each Diamond equals the fighting power of a small army, but like the rest of the Majat they are bound by the Code of their Guild. They must always follow orders and are allowed no loyalties of their own – in politics or in personal life. And, they can never leave the Guild. Once ranked, only death can remove them from their bond to the Majat.

Two of the main characters of the book, Kara and Mai, are both Diamond-ranked, and throughout the series their loyalties and their resolve to follow the Code are thoroughly tested in every possible way.

In Book 1, “Blades of the Old Empire”, Kara is thrown into a political conflict orchestrated by a devious enemy, where she is meant to become a pawn and ultimately bring about the downfall of the Majat. As the gambit comes into play, Kara is faced with a choice between duty and honor. She must kill a good man, whose magic ability is essential for the survival of his kingdom. To refuse would mean sealing her own death warrant. Once she makes her choice, Mai, who is similarly trained but slightly superior to her in skill, is sent after her – and it becomes his turn to make a choice between following orders and doing the right thing. The choices they both make lead to a revolt inside the Majat Guild (described in book 2, “The Guild of Assassins”) and eventually to a war that is the focus of “Assassin Queen”.

When I started writing these series, I expected it to be finished in one, maybe two books. But even though each book does have a satisfactory ending (or so I hope), some loose ends remained and needed to be tied up. Thus, I ended up with a series of three standalone but interconnected books. Each of them was a lot of fun to write, in all different ways.

Writing book 3, “Assassin Queen” felt very satisfying. I knew the story was going to be fully wrapped up, but having a whole book to do it gave me the luxury of doing it through very fun subplots that originally came up during my world building for the series but, as I believed, were never going to see the light of day. One of those subplots takes place in a desert Queendom of Shayil Yara, a matriarchal society modeled after the ancient Middle East. And yes, Kara has a mysterious far-reaching connection to that queendom – but of course you would have to read the book to find out more about this, and about the choices all my characters must make to find their peace.