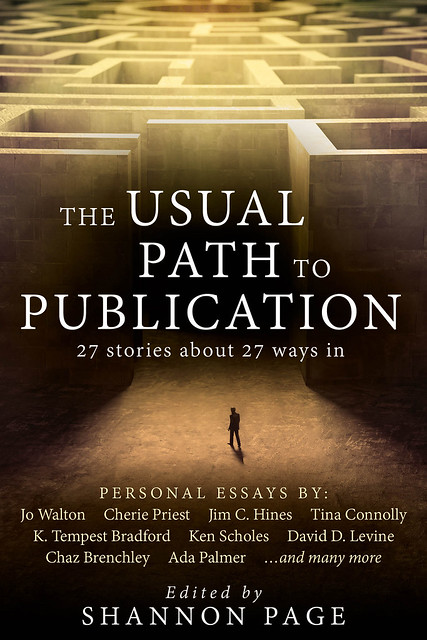 My personal path to publication, in terms of novel writing, was to post my novel on this blog, where it was read by an editor, who made me an offer. Is this the usual way it’s done? No. But is it wholly unusual? Well, as it turns out, there are a lot of ways to be published. Editor Shannon Page has assembled some of these way in her non-fiction anthology The Usual Path to Publication.

I love writing workshops. I mean, sure, the internet is great and all, but the way I really learned about how the writing world works—not to mention how I made every writer friend I have—was by going to workshops, as well as their close cousins, conventions. Putting myself out there where lots of writers congregate, to talk about writing stuff, and everything else.

(I even met my husband at a writing convention. But that’s a different Big Idea.)

Imagine my thrill when I “graduated” from attending workshops to being asked to instruct at workshops. I will be the first to admit that I still have plenty to learn about the craft of writing; and as far as the business goes, I have quite obviously not become a household name, nor made even a small fortune. Even so, it was very encouraging to realize that I have learned a thing or two which newer writers might find useful. It’s a joy and an honor to be able to share that knowledge.

Last summer, I was an instructor at the Cascade Writers Workshop, a Milford-style small-group workshop. Cascade is a wonderful group of people dedicated to bringing writers together, giving newer writers a hand up, welcoming everyone into this great community. At one point during the workshop, all the instructors were gathered together in an open panel where the participants could ask us anything. One intrepid audience member raised their hand with a question about the “usual path to publication.”

It grieves me a bit to admit that we all laughed. In our defense, it was nervous laughter, startled laughter, uncomfortable laughter. And then we proceeded to seriously tackle this frankly impossible question. We spoke about the fact that there are as many answers to that as there are published authors. We told our own stories, both in that panel and for the rest of the weekend.

At some point, I realized, This would make a great anthology.

I shrugged it off at first. I had (still have!) too many projects on my plate already. But the idea wouldn’t let go. I talked to a few people about it. Tor editor Claire Eddy, another of the instructors, told me, “That’s a great idea. I’d buy that book. Everyone would buy that book.” By the end of the workshop, I’d decided to go for it. And this project was born.

Over the next few months, I put out a call to as many authors as I could get hold of, asking them for their unusual, amusing, inspirational, bizarre, even dreadful tales of how they actually got published. And, amazingly, so many of them responded. I got a little shiver of delight every time I opened my email to find another submission. The stories are great—charming, funny, painful, inspirational. There are missed connections, dead agents and editors, serendipity, technology woes, ignored advice, and deeply altered expectations. Most of all, there is persistence. If one thread unites all the essays I gathered, it is that these are people who did not give up.

As I began compiling the essays into a book, a second thread became clear: breaking in is only the start of the adventure. As the publishing landscape continues to change, seemingly faster all the time, once-comfortably established writers are having to adapt, often dramatically. Series get canceled, publishing houses merge or vanish altogether, agents and editors quit the business or move to other houses.

And then there is the bold (and terrifying, and exciting) new world of self-publishing. A few of my authors have dabbled there; one has jumped in all the way, and is doing far better than she had imagined possible. If there is ever a Usual Path to Publication Volume II, I wouldn’t be at all surprised to find it brimming with successful self-published writers.

This is not a how-to book. It’s a how-this-person-and-that-person-and-the-other-person-did-it book, twenty-seven times over. Coincidence and luck and timing and the random forces of nature run strong in these stories. I hope readers find them as enjoyable, entertaining, and inspirational as I do!